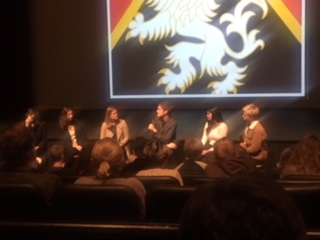 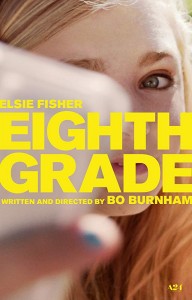 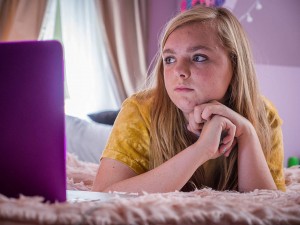 Eighth Grade is a 2018 American comedy-drama film written and directed by Bo Burnham. It is his feature film directorial debut. The plot follows the life and struggles of an eighth-grader, played by Elsie Fisher, during her last week of classes before graduating to high school. She struggles with anxiety in social situations but produces video blogs giving life advice. 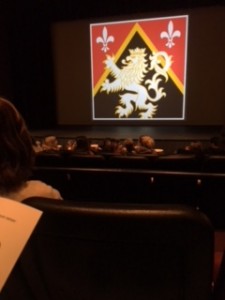 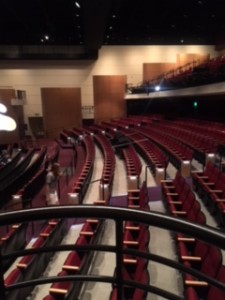 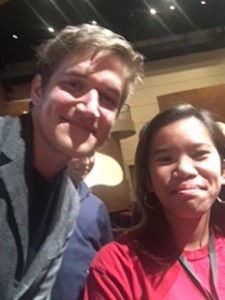 Eighth grade is a time of adolescence, youth, and figuring out who oneself truly is. Bo Burnham explores these themes in his film Eighth Grade.

Eighth Grade  tells the story of Kayla Day, played by Elsie Fisher in her journey of the last week of eighth grade. She posts advice videos on the Internet which garner no attention whatsoever, and is given the label of the “quiet girl” at school. She often writes down in her notebook, allowing the audience to view what her goals are at that certain point in the movie. Some parts of the movie that play an important role in Kayla’s change in character include popular girl Kennedy’s birthday party. It is clear from the beginning that Kennedy and her friends do not like Kayla, however, due to her mother, Kennedy must invite Kayla to her birthday party, to which gives Kayla a panic attack in the bathroom. Another part in the movie that definitely shapes Kayla as a character is during the High School shadow event. She meets Olivia, a high schooler, who she views as one of the coolest people to exist. Olivia one day invites Kayla to hang out with her friends. Unbeknownst to Kayla, her father follows and watches her with her friends. It is not until one of Olivia’s friends points out some man’s creepy staring that Kayla realizes that her father has been watching her the whole time. This leads the two into an argument and prompts Kayla to get a ride home from one of Olivia’s friends. This turns out to be a bad decision on Kayla’s part, as after Olivia is dropped off. Riley, the driver, begins to make moves on Kayla. After a few refusals from Kayla, Riley backs off, understanding that she will not give in. This brings Kayla to have a change in character.

This film was very insightful, and with the movie that gave the audience some great laughs, there was a powerful message behind it. I personally enjoyed it despite some of its more awkward moments. I do not believe that it deserves its R rating despite the sexual themes and swearing. It is a very raw movie that kids my age can most definitely relate to. It truly gives adults a real perception of what life is like for a 13 year old today.

We had multiple people speak during the talk, and many questions were asked. Bo Burnham is very down to Earth and a hilarious person. Two psychiatrists were also brought in to see the scientific side of things. Two students of Harvard-Westlake were also brought in to see a younger person’s perspective on the movie. Through the audience-director discussion, I learned a lot. Many young people feel the same anxiety and stress as grown adults, telling us of social media’s impact on our lives today. He gave us his story as a comedian and how he would get panic attacks from performing on stage. He wanted to create a movie displaying these kinds of raw emotions and to give the older audience a different perception of teens nowadays.

I enjoyed the event very much and am very thankful I was able to meet such an amazing director. The venue was wonderful, and I learned a lot. This definitely spoke to me as a member of the youth myself.