BEIJING — The young applicant is described as confident and courageous. His résumé, at 15 pages, is glittering, complete with performance reviews (“full of energy”), a map of his travels (trips to Tokyo and Bali) and a list of books he has read this year (408 in total).

But the applicant is not a seasoned job seeker. He is a 5-year-old boy from southern China applying for a spot in first grade at a Shanghai private school.

“I hope I can outperform my parents,” the boy is quoted as saying, between photos showing him playing the piano, swimming and driving a toy car.

The résumé, which was leaked and shared widely online this week, has provoked a mix of fascination, indignation and debate about whether children in China’s test-crazed education system are being raised as soulless strivers.

Some called for the parents of the boy to be arrested. Others wondered whether today’s children would know true happiness, given the intense pressure to perform well and land good jobs.

“Only 5 years old?” one user wrote on Weibo, a Twitter-like site. “So scary.”

Still, some defended the parents, saying they were trying to promote their child’s best interests in a flawed system.

By Thursday evening, tens of thousands of people had weighed in, and a hashtag about the boy had been viewed more than 38 million times.

Yong Zhao, a professor of education at the University of Kansas, said the debate reflected widespread anxiety among Chinese parents about getting their children into top schools. In China’s test-dominated system, exam scores determine where students go to college and what careers they can pursue.

“No matter how many good schools there are, people are always shooting for the best,” he said. “Where their children go to school represents an achievement, an accomplishment for parents. But many don’t know what a good education is.”

It is unclear who prepared the résumé, which was addressed to the Shanghai Starriver Bilingual School but whose claims could not be independently verified. As in urban school districts in the United States and elsewhere, it is common for parents in Chinese cities to hire coaches to help their children gain admission to selective schools.

The competition for seats at top schools in China is notoriously cutthroat. In some cities, the wealthy and well connected pay large sums of money, sometimes described as “donations,” to secure placements in top programs.

“There is a competition to rank every student,” he said. “Under these circumstances, of course parents want their kids to rank in the top. Then it worsens this kind of anxious competition.”

The boy’s résumé reads like a PowerPoint presentation, complete with growth charts and stick-figure clip art. It includes discussion of his adversity quotient and his artistic talents. It also provides details of his schedule — time for memory training, English diary class, sports and piano — and samples of his artwork, including drawings of dogs and fish.

“I never cry when I get shots,” the résumé says. “Starting when I was a year and a half old, I would get up by myself when I fell down. Everyone praised me as brave.”

The résumé closes with a list of English books the boy has read, including “The Hungry Squirrel” and “Bubbles in the Sky.” It shows a picture of him with his head resting on his hand, a pensive look on his face.

A caption alongside a photograph of the school’s terra-cotta facade reads, “When will Shanghai Starriver open its gates to me?” 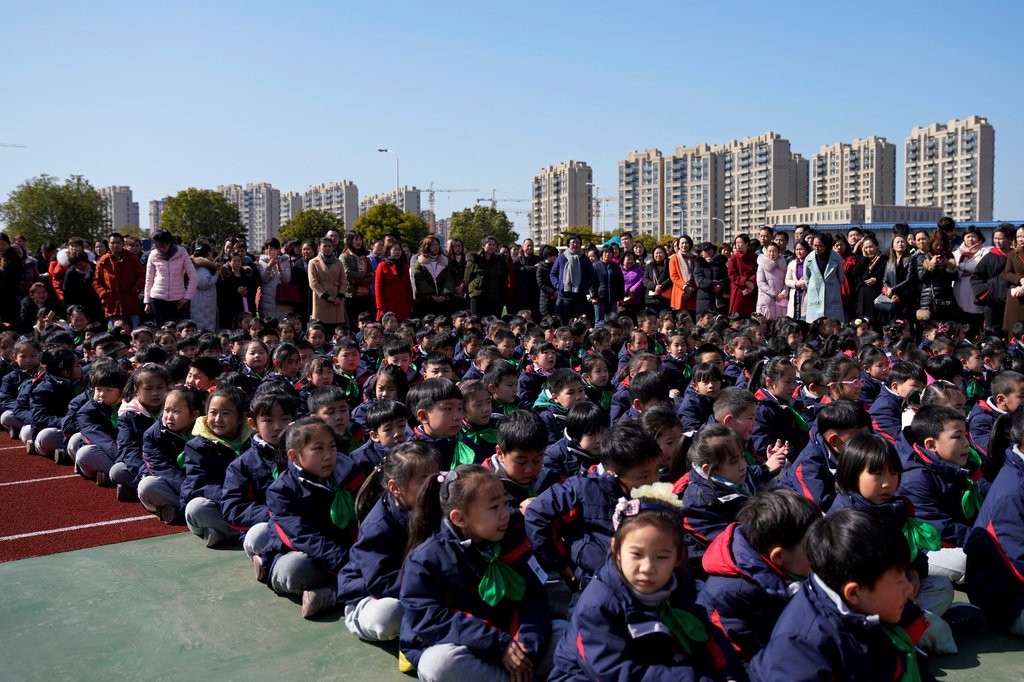 A Shanghai primary school in February. The competition for seats at top schools in China is notoriously cutthroat.CreditCreditAly Song/Reuters