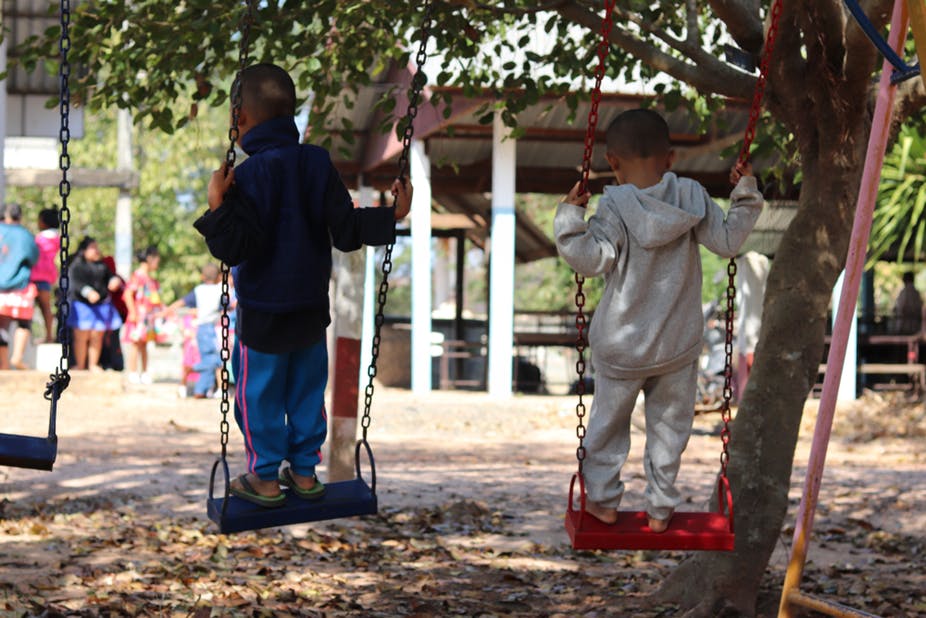 How playing on swings can help children understand physics

To children in Zimbabwe, they’re mzeerere. Kids in Eswatini call them mjikeni; their South African counterparts refer to the mswinki. The words may be different, but the experience is the same: children love to play on swings.

What they may not realise is that they’re learning while playing. The swing allows children to physically experience a wide range of physics concepts: velocity, gravitational potential energy – the sort of energy that allows a large swinging mass to be used to break down buildings – weightlessness, period of swing and the rush of wind resistance.

Many of these concepts, then, are known to children – in their vernacular languages. But in some cases, like acceleration or angular velocity or acceleration, there may be no equivalent term in their own language. This means that formal school physics comes with its own terms; language far removed from children’s out-of-school experiences on the playground.

Research and the sort of educational approach used in, for instance, Montessori and similar have shown that play is a valuable form of learning. Practical experience causes learning in more than just the mind; it develops skills.

I wanted to know whether trainee physics teachers at a South African university had ever understood the link between playground experiences and formal physics concepts during their own school days. This could imply they are likely to show the same link to their students.

My study showed that there was no deliberate explanation of the link between play and science. This is a shortcoming of teacher training programmes. Teachers must be able to analyse and explain the application of science principles in the games that children like to play and use this knowledge in the learning and teaching of science.

The way science is currently taught in southern African countries ignores the fact that the whole environment is a laboratory for learning.

My study focused on the experiences of pre-service teachers at the University of Limpopo in South Africa. Eight student teachers were interviewed after I’d established that they grew up playing on swings. They were also able remember how they learned about the concepts in formal physics. I wanted to know if there was a link between these two things for them.

The student teachers told me that their own physics teachers never referred to pupils’ playground experiences when discussing concepts like the pendulum. This meant the pupils didn’t easily connect swing play with the idea of the pendulum.

It’s not just swings that provide valuable Physics lessons. Several other playground games directly apply Physics principles that children struggle to understand in school. For instance, the see-saw directly applies the moments of forces. The bicycle has many physics principles of motion, balance, forces, velocity ratios and mechanical advantage.

When it comes to the swings, children often create their own games. They’ll twist the swing, then allow it to unwind. They’re experiencing angular momentum; the idea of masses in circular motion. Players make themselves dizzy on the swing, then stagger and fall – the winner is whoever remains standing. In this way they relate physical balance of the body to its rotation.

Jumping from the swing to land as far away as possible from its resting position allows players to experience projectile motion, range, height and wind friction. The farthest jump wins the game. This implies that the concept of distance measurement is tacit in children’s playfield experiences.

In all these experiences, children develop words in their languages to communicate various aspects of the game. While the words may differ from the terms used in physics as a school subject, the concepts are the same. For example, “nako” is time in the Sepedi language and it is used to mean the time for the swing to go from one extreme to the other. In physics, this concept is known as period of swing and relates to the frequency of a swinging object.

The “lessons” learned on a swing mean that a Pedi child, for instance, will carry a deeper understanding of the pendulum (“nako”) into their school lessons. That same child will understand the physics of mswinki better, too. School and play become a continuum.

But this is only true if teachers are able to identify the value of swing play to learning, and to explicitly draw links between the two. My research suggests this isn’t happening very often.

My research suggests that it’s important to rethink science education so that it becomes more relevant to children’s lived experiences in play, work and around the house.

Teacher training needs to go beyond the content of science to include applications in learners’ everyday experiences. This enables science to enrich the lives of learners.

Out-of-school experiences are also practical problem-solving opportunities where the systematic scientific method is constantly applicable. Schools without laboratories can benefit by changing teachers’ and learners’ mindsets to recognize the world as one big laboratory and science as an unending systematic engagement with the real world.