As the Getty Center turns 20, we’re celebrating with an unforgettable birthday bash. Enjoy an engaging, immersive and fun day with some of the city’s best musicians and dancers. Have your picture taken at the photo booth, make a crown inspired by Richard Meier’s design of the Getty Center or by Robert Irwin’s Central Garden, get up and dance with our DJ, or try your hand at our birthday games (Getty style!).

As the Getty Center turns 20, we’re celebrating with an unforgettable birthday bash. Enjoy an engaging, immersive and fun day with some of the city’s best musicians and dancers. Have your picture taken at the photo booth, make a wearable accessory inspired by the museum’s iconic tram, get up and dance with Versa-Style, or try your hand at our birthday games (Getty style!).

Sing, dance, play and experience something unexpected with Versa-Style! Participants of all skill levels are invited to release their inner artist and get up on the dance floor. Get inspired by the acrobatic breakdance and energetic hip-hop and learn some fun and easy dance moves. 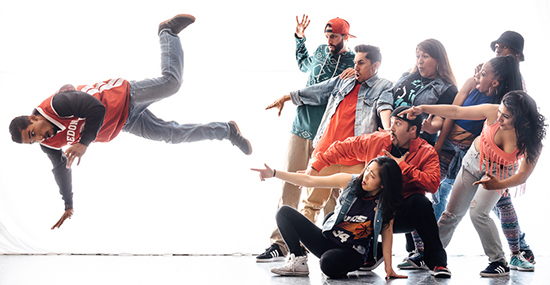 Keali’i O Nalani
12:45–1:45 p.m. & 4:00–5:00 p.m.The Halau Keali’i O Nalani Dancers, under the direction of Kumu Hula Keali’i Ceballos, bring the spirit of Hawaii to the Getty. Keali’i is respected nationally and internationally for his deep knowledge of ancient Hawaiian hula, his creativity in choreographing hula in new styles, and his personal power in performance. Please join the dancers as they transport you to crystal blue waters and a silky,sandy beach paradise with traditional hula. 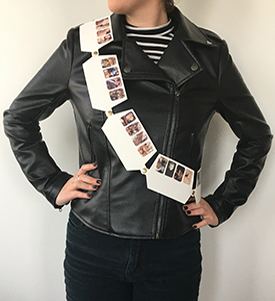 WORKSHOPS
10:00 a.m.–6:00 p.m.
with last seating at 5:30 p.m.Tram-Tastic: Tram Inspired Wearables with Nate Larson
The Getty tram experience doesn’t have to stop at the top of the hill! Create your own wearable Getty tram and populate the cars with the museum’s cast of characters!Piñata Workshop with Marianne Sadowski
The pinnacle of a celebration is undeniably the piñata – the ultimate birthday party game. Join us and take your own personal twist on a traditional favorite when making this festive container with papier-mâché, balloons, and cardboard to bring a birthday spirit to the Getty.Gilded Frame Workshop
Meticulously detailed or beautifully simple, frames have the ability to completely transform the art they hold. Decorate a dazzling gold picture frame using mixed-media materials including paper, twine, and sequins to display your favorite postcard-sized art piece from the Getty collection. You can use inspiration from frames you’ve seen in the museum! 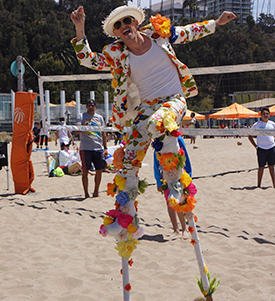 An actor, clown, stilt-walker, fire performer, and puppeteer, Eros Biox is the founding father of L.A.’s Stilt Circus and one of the ambassadors of the French art of zigrolling. Eros was one of the principle characters in Cirque du Soleil’s DELIRIUM and you may recognize him from television, film, and commercials. Combining stunts and performances that need to be seen to be believed, this high-energy party starter is second to none. Enjoy the spectacle and splendor of this graceful and buoyant entertainer as he roams the Getty on stilts.

Alphorn Quartet–Terrain Music Directed by Chris Kallmyer
12:10–12:32 p.m. (Upper Arrival Plaza)
2:00–2:22 p.m. (Upper Central Garden)The Getty Center is built upon two naturally occurring ridges in a mildly mountainous terrain. The alphorn is a long, wooden instrument used in mountain regions in Switzerland for means of communication. A quartet of musicians will musically reach across the Getty’s grounds playing songs from one balcony to another–bridging the distance between with sound.

Snap Yourself
10:00 a.m.–6:00 p.m.Hold the memory of the Getty close to you for 20 more years by taking a classic birthday party picture in a photo booth–props and backdrop to boot!Chill Zone
10:00 a.m.–6:00 p.m.
Museum CourtyardEnjoy big chess and other classic games in our Getty Chill Zone! 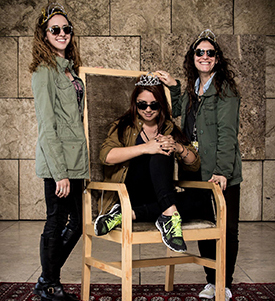 Twenty years ago this month, visitors streamed to a Brentwood mountaintop to see the brand new Getty Center, featuring breathtaking vistas, sky-lit galleries, dramatic modernist architecture by Richard Meier, and the always-changing Central Garden, created by artist Robert Irwin.
The iconic Getty Center was the result of 15 years of research, planning, design and construction. After purchasing the hilltop site in the Sepulveda Pass in 1982, the Getty invited 33 architects to submit qualifications. In 1984, Richard Meier was selected as the architect. Construction began in 1989 – and was briefly halted by the Northridge earthquake in 1994. In December of 1997, the Getty Center opened to the public, with initial demand for visits so strong that advance parking reservations were required for the first few years.Since then, more than 20 million visitors from all over the world have come to the hilltop campus, where admission is free (and no reservations are necessary). More than 160,000 K-12 students visit each year, including more than 130,000 from Title One schools, whose transportation is subsidized by the Getty.“The Getty Center was envisioned as a destination where people could come for inspiration and contemplation,” said Getty President and CEO James Cuno.“ That vision came true, and we’re honored to host visitors from across the globe, as well as our neighbors here at home. But by coming together in one location, the Getty programs were also transformed, becoming infinitely greater than the sum of their parts.”Working together from their hilltop campus in Los Angeles over the last 20 years, the Getty Conservation Institute, Getty Foundation, J. Paul Getty Museum, and Getty Research Institute have helped conserve, study and present Old Master panel paintings in Europe, ancient mosaics in the Middle East, icons from the Sinai Desert, cave temples in the Gobi Desert, contemporary video art in Latin America, modern architecture in India – and much more.“In the 20 years since the Getty Center opened, the Getty has begun to fulfill its potential as the world’s largest cultural and philanthropic organization dedicated to the visual arts,” said Maria Hummer-Tuttle, chair of the Getty Board of Trustees. “We are able to look around the world and see the benefits of our research and work on every continent.”One example is Pacific Standard Time: LA/LA, underway now, an unprecedented international collaboration of more than 70 visual and performing arts organizations. An exploration of Latin American and Latino art, Pacific Standard Time: LA/LA comprises more than 80 exhibitions and events, creating new scholarship in an area that has not received sufficient study.

“As we celebrate this 20th anniversary, we continue to look for ways to have an impact in the world,” said Cuno, “to do what can’t be done by others, what only the Getty could do.”

Throughout the next few months, the Getty Center will host a number of events in honor of the anniversary, including an exhibition of photographs by acclaimed photographer Robert Polidori (Canadian-American, born 1961), known for his images of architecture and human habitats, who created a series of images of the Getty Center shortly before its opening in 1997. Robert Polidori: 20 Photographs of the Getty Museum, December 12, 2017–May 6, 2018, features captivating behind-the-scenes views of the building and the new galleries as objects from J. Paul Getty’s painting, sculpture, and decorative arts collections were being installed in the museum.

Getty Publications is producing a special edition commemorative volume, The Getty Center at 20, which will be on sale in the Museum Store beginning in January, at a special price of $5. The book features striking photographs of the Getty Center, and documents the work of the Getty’s programs around the world over the last 20 years.

In February and March, Jim Cuno will present a special series of the Art and Ideas podcast focusing on the anniversary, featuring interviews with Los Angeles Times architecture critic Christopher Hawthorne, architect Richard Meier, and Stephen Rountree, who served as the director of the Getty’s building program.

J. Paul Getty Museum Director Timothy Potts leads a panel of senior curators from the Museum to look at some significant recent acquisitions to the collection. Hear the intriguing behind-the-scenes stories behind some of these acquisitions on February 13.

On March 10, the community is invited to join an unforgettable birthday bash in an engaging and immersive Family Festival featuring dance, music, Getty Center-inspired crafts, and birthday games (Getty style).

“We invite visitors to join us as we celebrate the 20th anniversary of the Getty Center and the Getty’s work preserving cultural heritage at home and around the world,” said James Cuno.