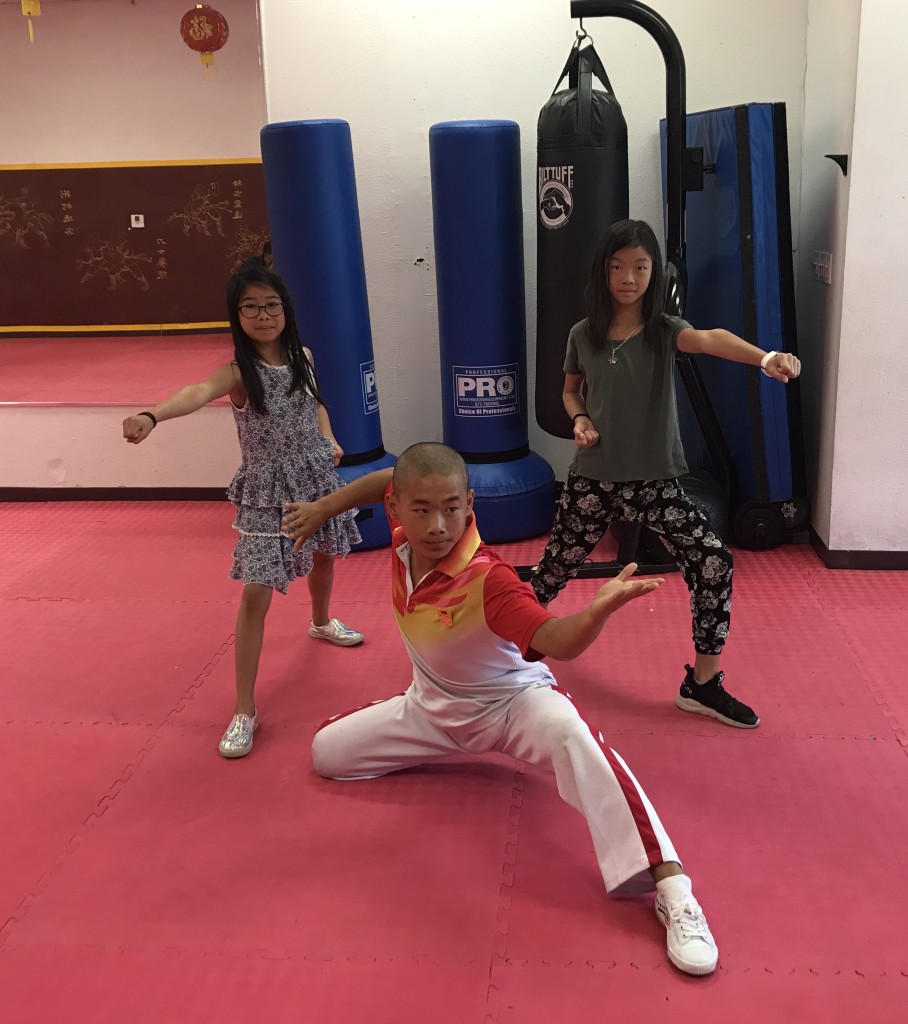 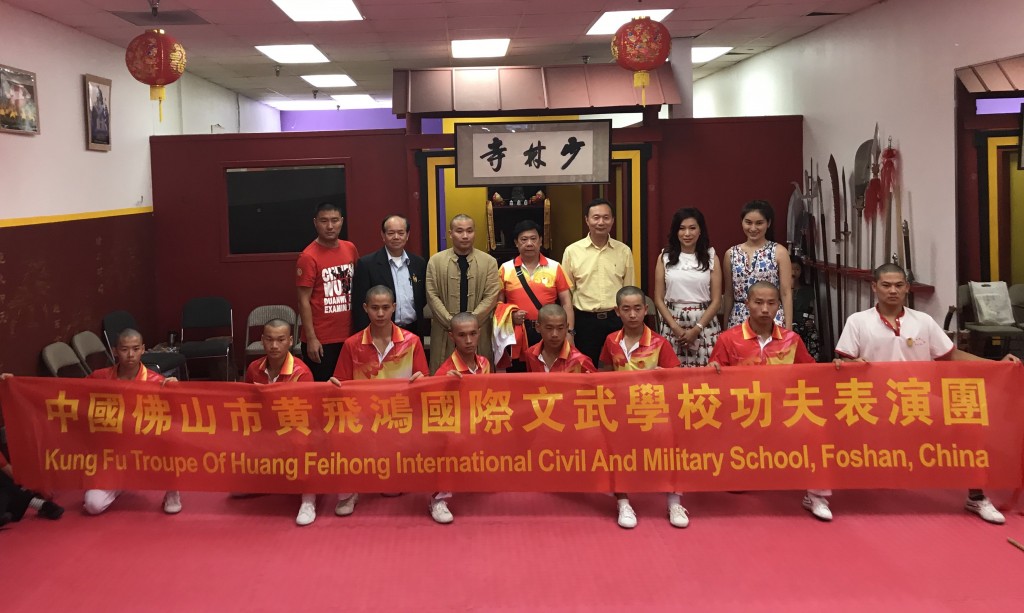 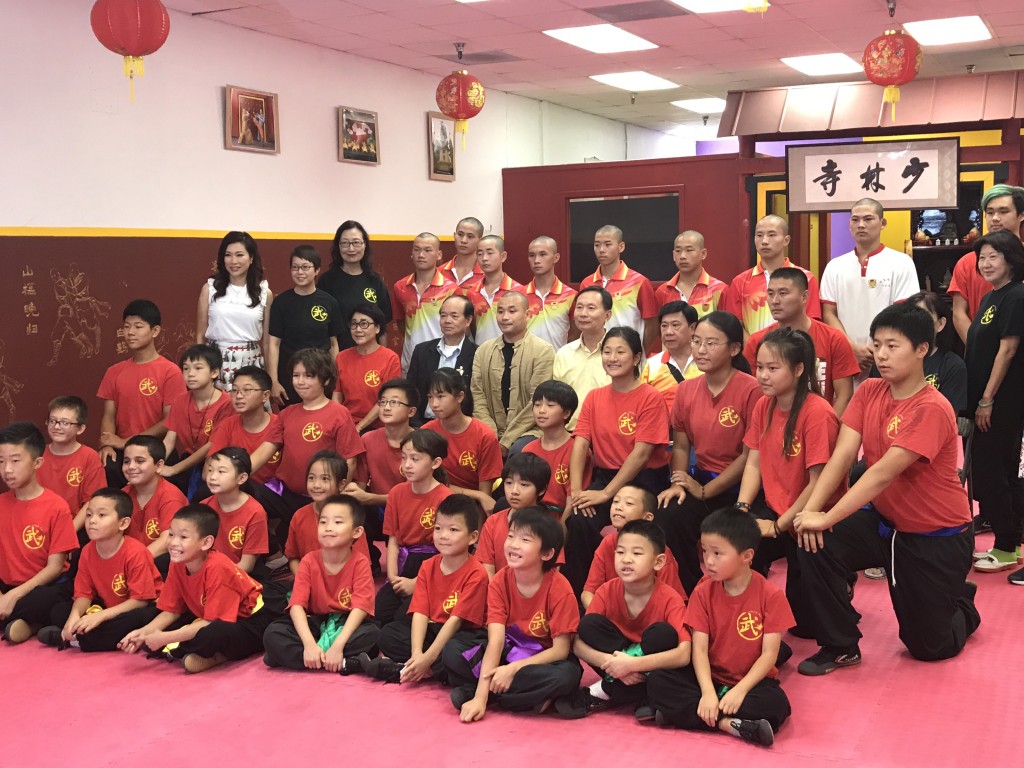 The Kung Fu Troupe of Huang Feihong International Civil and Military School of Foshan, China is here at Los Angeles, California to perform in the Arcadia High School theater.

Today, I interviewed the coach, an organizer, and students from Kung Fu Troupe of Huang Feihong International Civil and Military School of Foshan, China. While interviewing the coach, I learned that Wing Chun is from the southern part of China. There is a different type of martial art in the northern part of China, just like cantonese opera and beijing opera.  He also said that the hardest technique and is the stance, which involves a half squat.  The special thing about Wing Chun the the fact that it uses a lot of waist and fist power.  He said that his students will also learn Northern martial arts technique, uses mostly the legs. They try to combine the two. The coach has been coaching Wing Chun for 15 years now and started learning when he was nine years old.

The organizer said his job was to organize events like this and support and manage his troupe. He says his goal in America is to have an excellent performance and to wish America good luck on their next Olympic.

One of the students has learned for 8 years. He explained that the gold pin with China’s flag on it that all the students and their coach wear represents their troupe. He says the reason why everybody has a bald head is because it represents Chinese Kung Fu.

Another of the students, named Liu 劉新廣, has learned Wing Chun for also 8 years now. He says there is no hardest part in Wing Chun, instead he just has to be “gritty” (刻苦), meaning perseverance and not afraid of hardship. He states his favorite weapon, the weapon that he will perform is the double sticks.

What I learned today is that in order to master a martial art, you have to 克苦, be not afraid of pain, tiredness, boredom, failure and sweat.  I also learned a few Wing Chun moves from Liu.  I found it interesting and different than another martial art that I learned, which is Tae Kwon Do.

Hi, my name is Phoebe and on Sunday 9/10/17 we went to a martial arts place. We interviewed a coach who came to America along with some students from Fut San, China.  We got to watch them perform and some of them were from the Olympics.  We also got to learn a thing or two from the students themselves.
The coach was very nice.  The students came from China to perform at the martial arts place at night.  They got lots of badges and awards.  The students did very cool skills like back flips and round offs.  Each of their routine had a meaning to it like someone represented a pry mantis.  They were very active and had lots of talent.  The students used swords, whips, and other kung fu tools.  The whip sound was super loud and everyone had to cover their ears and try to go avoid getting hurt.  The coach taught for a long period of time. He started kung fu very early like before 11 years old.  All the students and the coach that came from Fut San, China wore a yellow pin.  Also all the students had almost no hair.  The student I interviewed was named Liang Zhu Giang.  The students from China weren’t little kids, they were like 17-25 years old.
After all the interviewing, we were able to learn how to do simple kung fu.  We also met up with some teachers from the martial arts school and they were super nice.  The students from China looked nice and shy, but when they started performing, their personality/ characteristics changed.  They yelled out kung fu words.
In this adventure I learned that kung fu needs some flexibility and balance/ yoga.  I also learned kung fu needs patience.