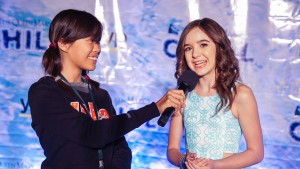 It was a warm evening on November 20, 2015; when the autumn breeze came blowing through the crowd gathered at the Queen Mary in Long Beach, California. This holiday season, Queen Mary has a special theme, the Chill! It’s where professional sculptors use about two million tons of ice to sculpt colorful ice statues. People come from faraway places to see the first day of this theme, including stars like Sabrina Carpenter, Olivia Holt, Brec Bassinger, and Aubrey Miller! A blue carpet was laid out at the Queen Mary entrance for all the TV and music stars. There, photographers snapped pictures of them and journalists asked them questions.

I, as a Junior Journalist, asked Aubrey Miller, who starred in the television series Just Add Magic, for her opinion about this year’s Chill.

“Well, I’ve never actually been here before, but I’m positive that it’s going to be absolutely amazing!” she replied.

It wasn’t long before my fellow Junior Journalists and I got to explore the Queen Mary building! Once we entered, we saw a huge slide made out of ice where people could slide down in tubes. The slide is called “Glacier Glide”, and it was super intense! After going on it a few times, we borrowed some parkas to go inside the Ice Kingdom, where the temperature is below nine degrees fahrenheit to keep the ice sculptures frozen. Everything inside was made out of pure ice except for the floor! The most appealing sculpture was a statue of a person. It was approximately 14 feet tall, with vivid colors painted on it. The statue was located in a room where all the ice was sculpted into food. There were also other rooms where the themes were Treasure, Waltzing, and Military.

Exiting the building, we came to the ice skating rink. There were kids and parents whirling, twirling, gliding, and in some cases, sliding. Skates could be borrowed at a booth, where you must tell a person your shoe size. If you couldn’t skate that well, or if you’re a beginner, plastic pandas and penguins that you can hold on to on ice are available too.

The fun didn’t end here. We visited the paintball booth, where a man which the Junior Journalists named Jonathan told us a story that yetis have stolen all of Santa’s candy! That’s why we needed to use paintball guns to shoot them and get the candy back. Jonathan had an invisible friend called Charlie (or so he says) who is luring the yetis out. Then, a speaker told us to fire and we started shooting away at plastic toys that moved. In the end, everything was covered in paint.

Everyone cheered at their victory.

This has been an awesome event at Queen Mary Chill. It’s going to go on for the whole Christmas holiday season of 2015, so be sure to check it out! 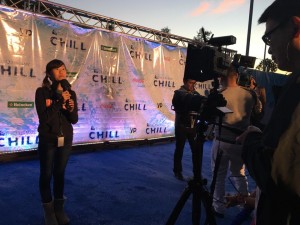 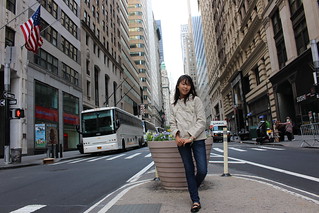 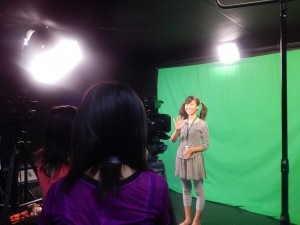 On October 4, 2015, the Junior Journalists of LaJaJaKids went to Arcadia, California to get to know background information about 8sian Media and the basics of behind the scenes in a show, movie, and video. 8sian Media is a network that features Chinese and other Asian TV channels and/or shows, such as the Voice of China, Ba Ba Qu Na Er (Were are we going, dad), and so forth. 8sian airs in over 52 restraunts in Los Angeles, New York, and San Fransisco, and soon to air in Chicago and Houston. Examples of places where you can watch 8sian shows are cafes, salons, and even on TV at home. About one hour of programming is added to each restraunt. 8sian also sells air time to advertisment agents to get clients. It is also featured on YouTube, where 8sian gets about 250 million views a month.

The Junior Journalists had to memorize hosting scripts from our last encounter with Ms. Mae who’s from 3 2 1 Acting Studios. We were given about ten minutes to rehearse, and then everyone split into groups: Group A (Apple), Group B (Banana) and Group C (Cookie). The first group that had to go up on camera was group A. A green screen was put up behind the speaker so the background could be easily changed later on. Meanwhile, Group B learned how to operate a camera and record with them. Group C stayed inside the editing room and learned how to edit the videos of Group A. The groups later rotated. During the course of filming, the Junior Journalists learned what it was like for reporters to be on camera. Our skills on memorization were also tested, for we had to memorize the hosting scripts. On the course of operating the camera, we learned how to focus the camera, turn it on and off, and how to angle it. During the process of editing the videos, we learned how to change the green screen into a background you want, how to cut off parts of video, and add tiny adjustments to it.

I have learned a lot of new information and skills in this short period of time. I can’t wait for another event like this to come. 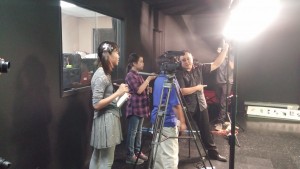 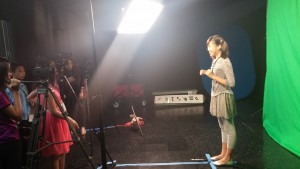 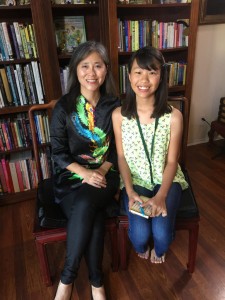 On September 18, 2015, three Junior Journalists– Isabel, Jaslyne, and I, Karen– went to Manhattan Beach to interview the award winning author, Ms. Icy Smith. This is what I have learned about her:

Ms. Smith has written many books, such as Half Spoon of Rice, The Lonely Queue, and Mei Ling in China City. Her books are about the history of Asian people who have been treated wrongly because of race and culture. For example, her first children’s book –Mei Ling in China City– is about two friends, one Japanese American and the other Chinese American, being separated from each other when the Japanese Americans were sent to internment camps. Another one of her children’s books, A Half Spoon of Rice, is about a nine year old boy forced out of his home in Cambodia by soldiers of Khmer Rouge.

Ms. Smith is also the founder of the East West Discovery Press, which is an independent publisher of multicultural and bilingual books. Examples of their books are Baseball Saved Us and Grandfather’s Journey, and many others. Ms. Smith founded the publisher because she want children to know more about the history of hardships that Asian-American had experienced in early years, and she want children are able to read the books in their native language while gaining bilingual skill. The children who read her books were surprised and excited by the stories, because they have not learned about these particular parts of history in school.

In general, what I’ve learned about Ms. Smith is that she is very interested in standing up for rights of the people who have been treated unfairly. I strongly recommend her books to you and hope you will get to know more about the history of people in different races.

On a mild August 29, 2015, three La Jaja Kids junior journalists–Isabel; Ryan; and I, Karen– went to the the city of Santa Monica to interview a few participants of this year’s annual cardboard yacht regatta, which was held next to the Annenberg Community Beach House.

Before interviewing, we reviewed the history of the beach house. Do you know that actress Marion Davies once lived in the Annenberg Beach House mansion? The whole building is now available for tours from June to September, if you are interested. After a few more minutes of reviewing instructions and slating for the camera, we were off to interview!

We had to choose a yacht that looked interesting or creative, then ask the owners if it’s all right to ask them a couple of questions. I had to do two groups (and another by accident), and thankfully they all accepted. I learned from my first team, The Rowers, that they designed their yacht in the theme of Pikachu from the Pokemon series because it is a favorite character of their son. This team’s name is The Rowers because the son thought that it would help them to row to the finish line faster. How interesting! My second team had named their group name and designed the boat after their mother’s work place, which happens to be the dentistry. Two little girls were decorating the yacht with drawings and stickers. It was really cute! The last team’s name was so complicated that it was really hard for me to pronounce. Awacte…something. They designed their boat after an octopus, explaining why their yacht has eight tentacles sticking out of the side.

Wishing the teams good luck, the other journalists and I went to vote with our voting tickets (They said: Most likely to sink, best use of theme, favorite yacht, and most spirited) and joined together to watch the final competition. In the racing process, I discovered that most of the ugliest (no offense to their designers) were the sturdiest and won their races. I’m happy that The Rowers won in their race.

I had to leave early so I missed out on the rest of race. I wonder who came out with the fastest time overall, but I was still happy to participate in such an amazing event. This activity, as I see, has helped improving bonds between family while building their yachts; and determination, because even when some teams fall into the water, they get back on or drag their boat across the finish line. Hopefully I’ll have a chance to view an event like this again soon.

On a sunny August 19, 2015, I went to the PBS SoCal production building, located in Costa Mesa, California along with other Junior Journalists. Two members of the crew in PBs gave us a tour of the main production rooms in their building.

During the tour, we went to a room with many different lights on the ceiling. That way, people can adjust the right brightness in a film. On the other side of the room, there is a green screen. A green screen will help an editor change the background before airing.

We also visited the dressing room. Its purpose is to customize the actors and actresses so they will look their best on television. To help see the makeup more clearly, the vanity includes very bright LED lights. Connected to the dressing room is a miniature lounge for people to relax in between filming. A television set is installed in the lounge to show actors and actresses how they did.

Next, the tour guide led us to an editing room, where editors make sure the time settings are perfect. They must check that advertisements follow immediately after the cut, so there will be no blank space in between. Our next destination was the sound room. In this soundproof room, sound will be adjusted. In some certain periods in a show, sound will get louder or softer. If whoever is acting fails to lower or raise his or her voice, or if they cannot get it to be perfection, the controls in the sound room will deal to that. Wow, making a show is harder than I expected!

Personally, I think that being able to visit PBS was a fun and… learning experience! This tour has taught me a lot about PBS. I hope that it will continue the good work!