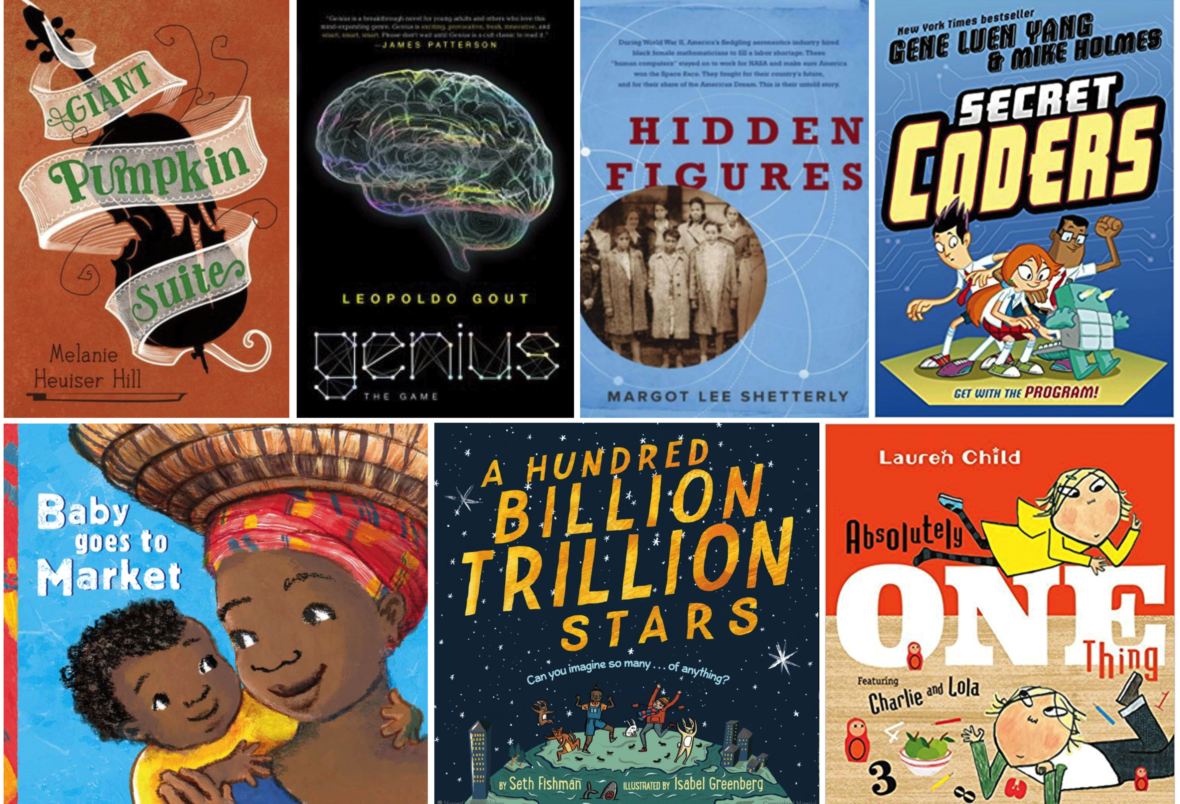 At a Nigerian outdoor market, Mama shops while Baby attracts edible gifts from the vendors. Baby eats one of each treat before adding the rest to the basket. When the basket gets heavy, Mama hurries home to feed “Poor Baby!” who’s “not had one single thing to eat.” According to Ellenberg, the math in a children’s book need not be announced in the title, but children should be able to recognize that it’s happening. For example, Fran Wilson, one of the other judges, shared that second-graders in her classroom pointed out the subtraction at play in Baby Goes to Market without her prompting. “That’s a sign of a real winning book,” says Wilson. Have You Seen My Dragon? By Steve Light
Pre-K
2015 Mathical prize winner

A child narrator searches high and low for his pet in this multilayered counting book. Children will enjoy spotting the roving dragon amid a richly detailed, pen-and-ink cityscape. They will also practice counting via a set of objects featured in spot color on each spread: two hot dogs, five water towers, 12 pigeons, and so on — up to the 20 lanterns in a final scene where the child and dragon are reunited. Clarissa tries all the usual tricks for falling asleep, including counting sheep. When that fails, the sheep suggest counting alpacas — this time in pairs. When that also fails, the alpacas recommend counting llamas — by fives. As the trend continues, Clarissa’s room fills up with woolly animals in bold colors and patterns. The comical storyline and bright illustrations will engage early elementary schoolers as they practice advanced counting skills. Big brother Charlie guides little sister Lola through the rules of numbers as they trek to the store to pick out a toy. Younger readers will enjoy correcting Lola’s faulty number sense, while older readers can join Charlie in embedded calculations, such as: how many stickers does Lola have left after sticking five on the pavement, three on a tree, two on her shoes, one on her brother and one on the dog? (Answer: zero.) Although the pages are chock full of digits, a well-paced plot, sibling humor and funky illustrations make for a breezy read. How do you convey the immensity of numbers like three hundred seventy billion billion? Writing 37 followed by 19 zeros likely won’t do the job. Instead, this book uses awe-inducing facts from the cosmos (a hundred billion trillion stars in the universe) and the ground beneath our feet (10 quadrillion ants on Earth) to explore scale and estimation. According to Ellenberg, literature can’t replace classroom instruction in the practice of math but books like this one can spark a “dizzy excitement” that’s also important to the learning process. “You can tell a kid there’s no largest number," he says. “If they can feel it, that’s a different story." Hopper knows there’s something strange about her new school. When she and basketball star Eni team up to find out what, things turn out weirder than she imagined. Readers are introduced to the principles of programming through logic puzzles, a robotic turtle and creepy birds in this adventure-filled graphic novel from the 2016 National Ambassador for Young People’s Literature. The book is the first in a series. Mathical also offers an educator tip sheet for Secret Coders. In addition to presenting calculations, figures, and puzzles, another way for a book to be mathematical is by portraying characters who love and practice math. In Giant Pumpkin Suite, math and cello enthusiast Rose deals with literal and figurative growing pains as she joins her shorter, nonmusical twin brother in a project to grow a record-breaking pumpkin for the state fair. “We want kids to see mathematics but we also want kids to see mathematicians, because math is in the end a human activity,” says Ellenberg. With frank, funny narration Schwartz takes readers on a numerical journey that begins at one and proceeds through mind-bogglingly large figures — but still ends very far from infinity. Complex ideas are tackled through everyday objects and patterns in whimsical, geometric drawings. Unanswered questions on some spreads will encourage readers to keep pondering and calculating after putting the book down. Mathical also provides an educator tip sheet for this book. Better known as one 2017’s hit movies, Hidden Figures tells the inspiring story of African-African women “computers” whose brains and grit helped launch NASA astronauts into orbit. With more depth than the film, this book illuminates the interconnections between math, careers and social history. A young readers’ edition and a picture book version also are available. Three online friends and tech prodigies from diverse parts of the world connect in real life during a high-stakes global tech challenge. Together they embark on a quest not only to win “the Game” but also to solve their individual problems: Rex is searching for his missing brother, Tunde is on the run from a military warlord, and Painted Wolf must conceal her identity after exposing corrupt Chinese officials. Told in realistic, rotating voices and filled with suspensful plot twists, this book will grip teenage readers regardless of their prior interest in coding or programming.