Have you ever, as a kid, wanted to prove to your parents that you could do something that was beyond their expectations? I definitely have. My name is Carissa Yu and recently, I performed Cantonese Opera at the Baldwin Park Performing Arts Center as a part of the Eagle Scout project of Anthony Lam. Anthony, one of the oldest among my Cantonese opera group, was doing this project to raise awareness of autism, a disorder he was diagnosed with at a young age.  Anthony invited two groups who helped him develop speech and social skills: Perfect Harmony Cantonese Opera Cultural Exchange Association and the String & Bamboo music group, to perform at this event.

When I first heard that we were performing at the autism awareness event, I felt like this was a great idea and opportunity to spread the word about autism, as well as to show that even kids can make an impact in the community.  When I first met Anthony in our Chinese Opera group, he wasn’t very sociable and he did not talk to us much. But as time went on, he became friendlier and it is quite amazing to see the transformation.  He is like our big brother now, helping us in our class with his erhu to practice singing.

On the event day, all the kids worked together in order to make the event a success.

Early that morning, we arrived at the performing center to get ready. There were Boy Scouts already running around setting up and my teachers and the Cantonese opera makeup artists were ushering us into the dressing rooms to begin the makeup process.

After a few hours, the event began. Backstage, as I was getting ready for my performance, I heard Anthony sing and play the national anthem on the erhu through the speakers. Then, he made his speech about the event that he organized and how he wanted to raise awareness about autism. Before he made his speech, an incident occurred. Anthony couldn’t find his notes for his speech, but he was still able to go out and improvise a very meaningful speech.

After, It was my turn to perform, followed by many of my fellow performers, some of which are only 5 years old. A professional speaker and a parent speaker also spoke about autism and their experiences. Almond Chan, another kid with autism, performed on the ukulele while singing to show that it is possible to overcome autism.

I believe that this event was definitely a great success and it is incredible what Anthony was able to put together. This brings me to the topic of how kids can give back to the community. I have been doing Cantonese opera for 6 years now and as I was younger, I didn’t really think much about how I can use this cultural art to help out everyone. Now, I believe that although I am only 12, I can still continue to preserve this tradition and my heritage, perform for the elderly at retirement homes, and teach people about this art. I think that anyone, it doesn’t matter if you are a kid or have struggled with a problem, can overcome the obstacle and make a difference in this world. I think that this event and everyone in it, Anthony, Almond, all the Cantonese Opera performers, the Chinese music performers, and the Boy Scouts, can prove that.

I was diagnosed with autism when I was about 4 years old. However, over the past 13 years, I was able to overcome my condition through the help and support of the Regional Center, the schools I have attended, my church, my Boy Scout Troop, Perfect Harmony Cultural Exchange Association, String and Bamboo Music, and, most importantly, my family and friends. Because of the positive circumstances and opportunities I grew up with, I want to use myself as an example not only to stress the importance of early intervention, but also to encourage the families of children with special needs to never give up. Thus, it is not only the goal of my event, but also one of my passions and goals in life, to raise awareness for autism so that our society will come to understand more about autism and eventually accept people with the condition, which will result in a more fair and peaceful environment for anybody to grow up in. 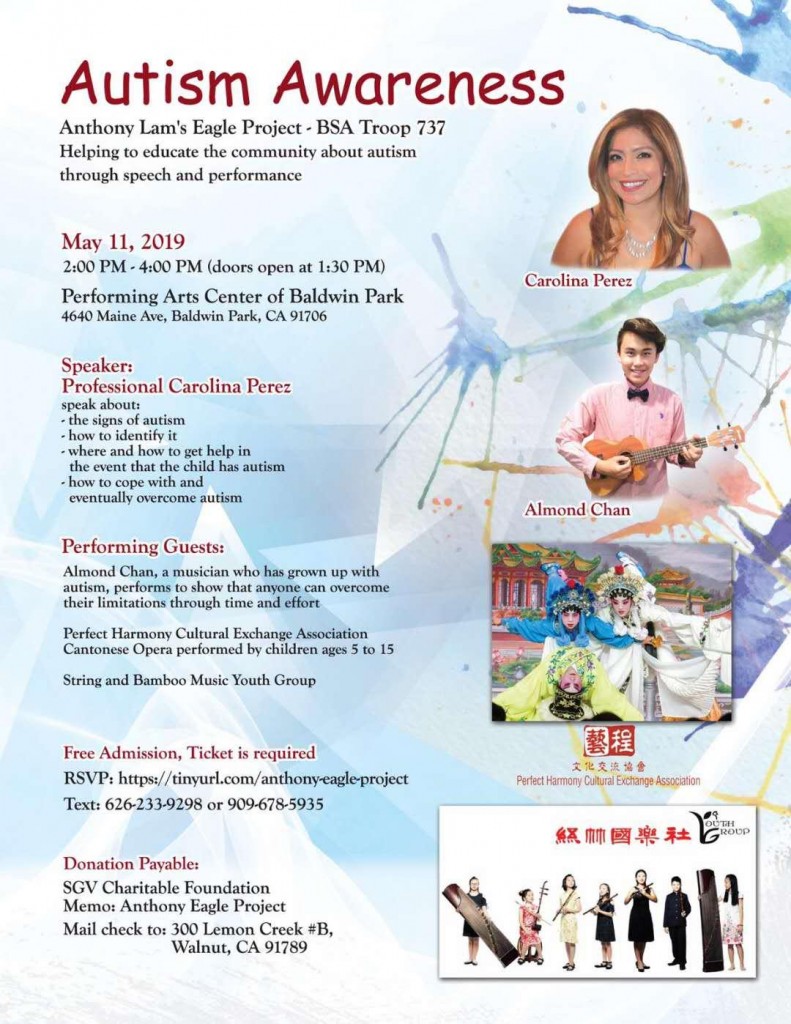