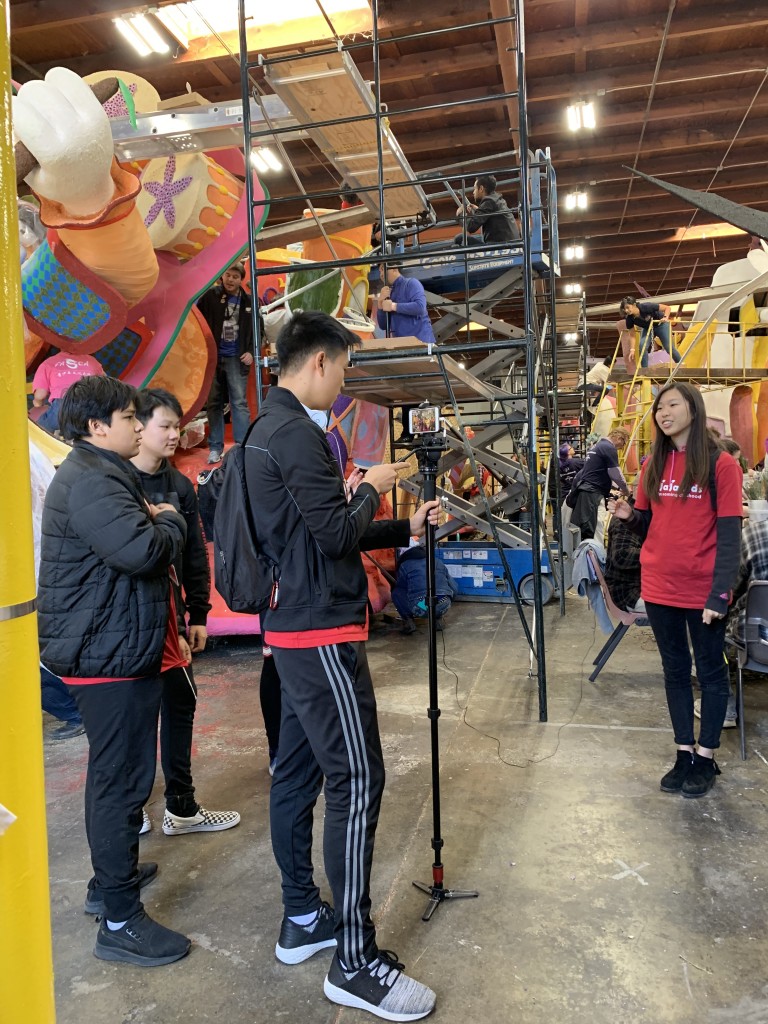 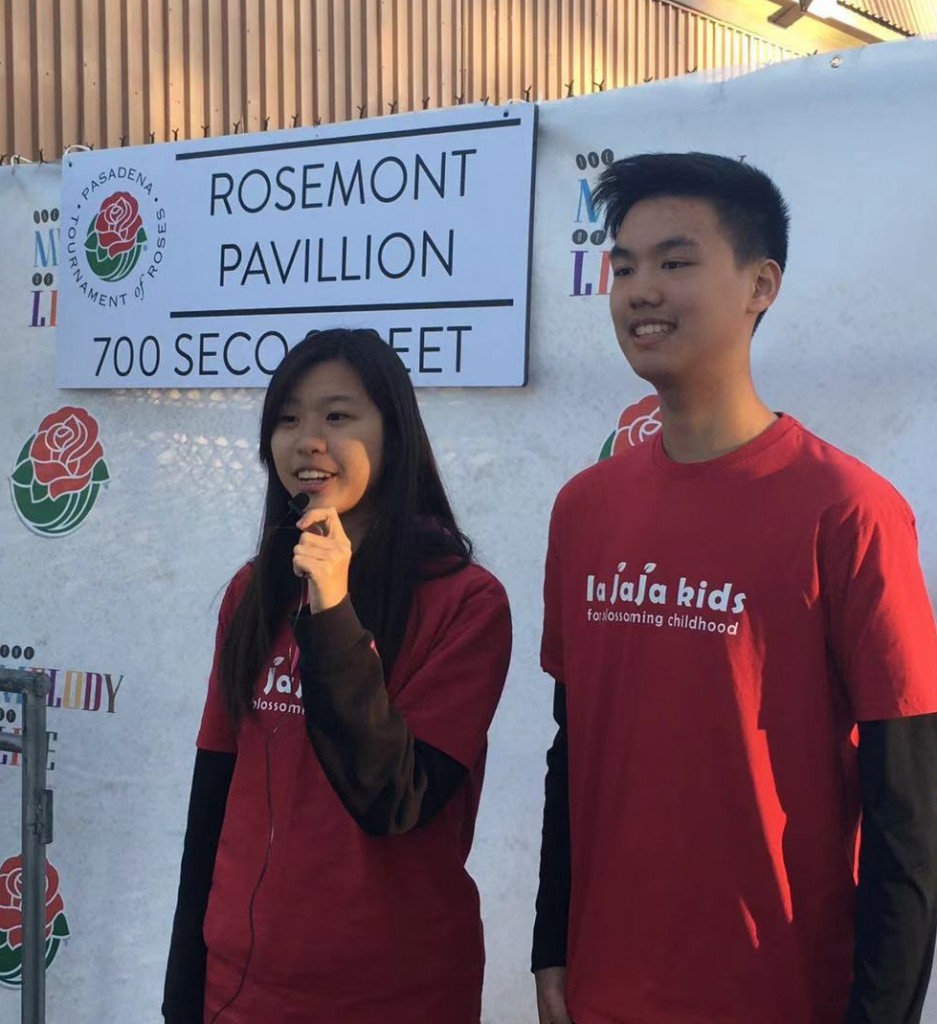 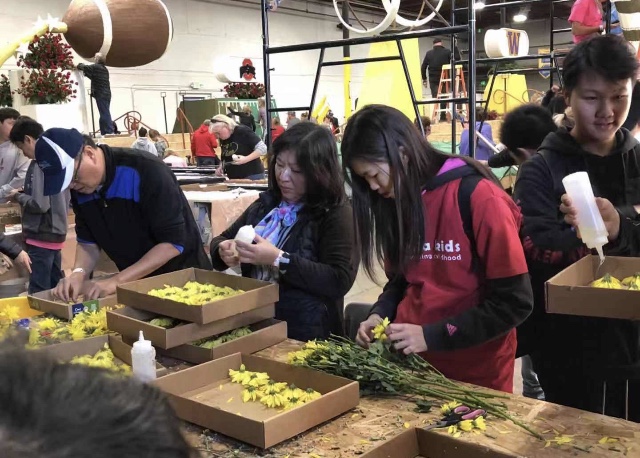 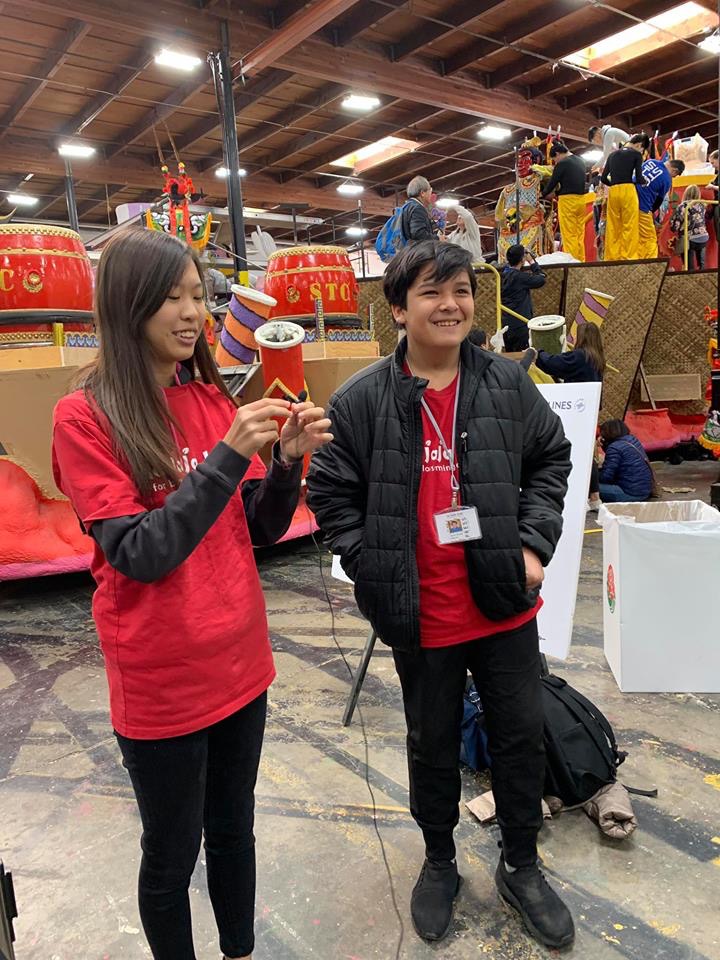 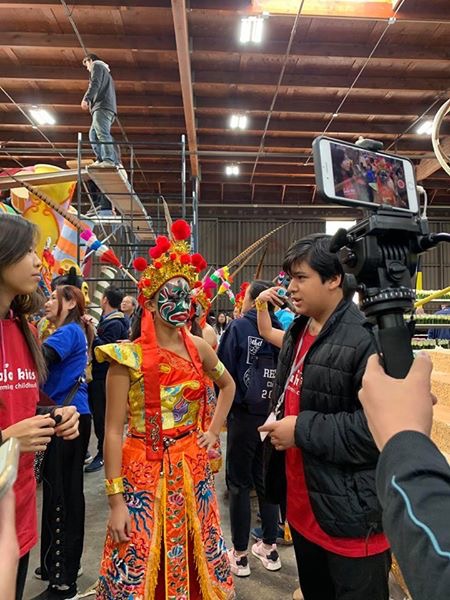 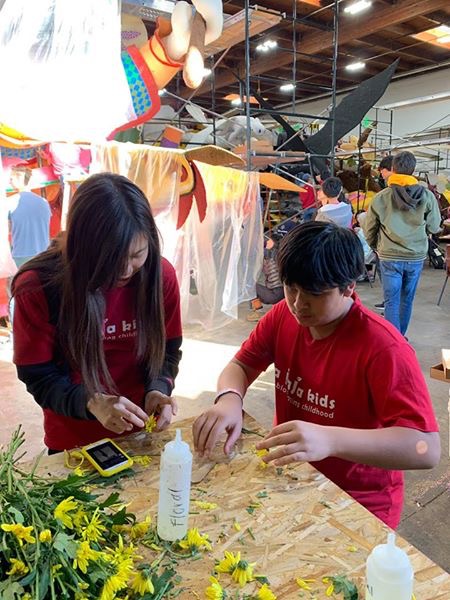 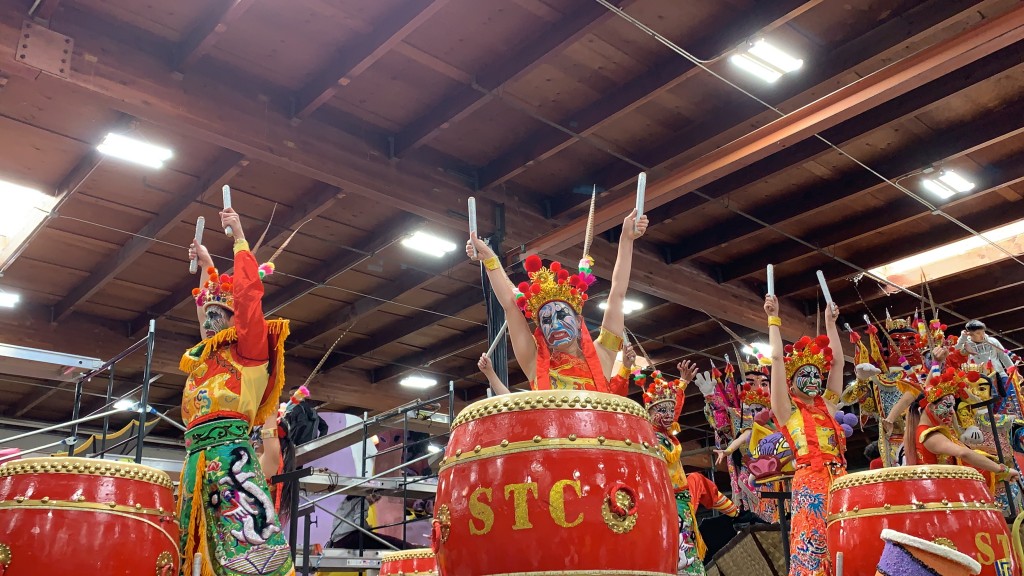 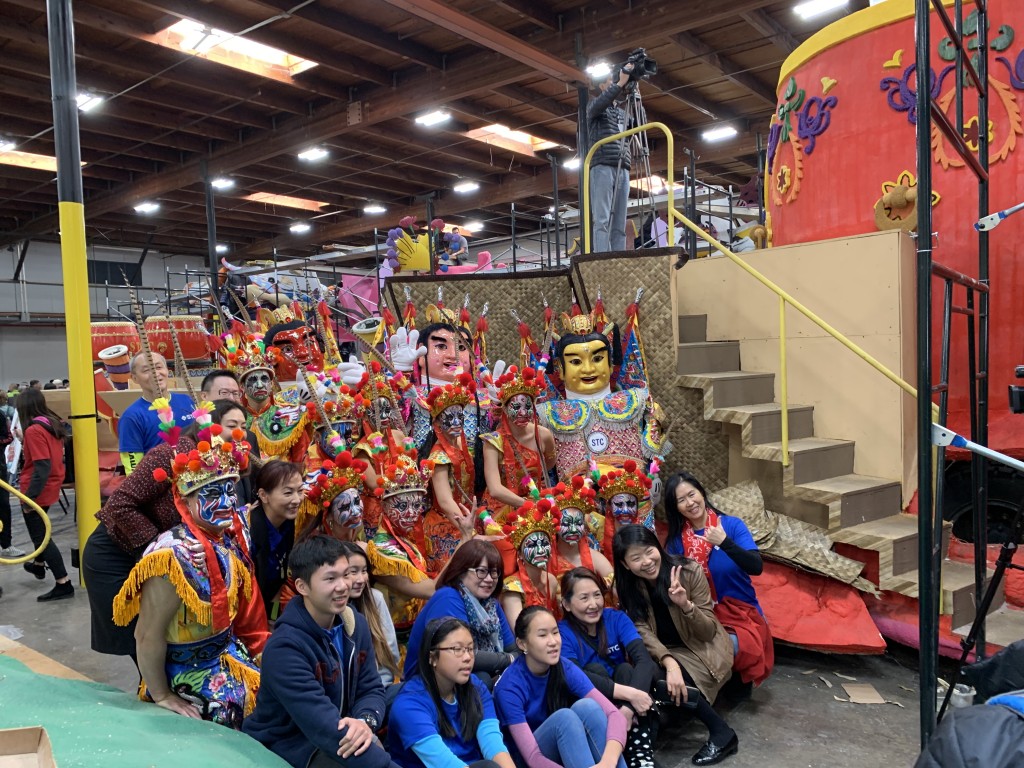 Upon arrival on this cold morning, on Saturday, December 28th, I volunteered to help decorate China Airlines’ float, “Rhythms of Taiwan”, before 2018 comes to a close. I checked in around 8:30 with a line of other volunteers. This is my first year volunteering for the Rose Parade floats. Two years ago, I attended a press conference to cover BDK Singpoli’s Rose Parade float entry, “The Monkey King: Journey to Success” which won the Fantasy Trophy Award for most outstanding display of fantasy and imagination. This year’s Rose Parade will mark the 130th year for this event. There are 40 sponsored entries and 3 Tournament of Roses entries in 2019’s Rose Parade. This year’s Rose Parade theme, “Melody of Life”, celebrates music as a universal language. It gives people a chance to see the different cultures and meanings in their floats.

As we pass through the front gate, I see a rainbow of flowers in buckets, on the ground, in racks, on tables, at every turn. I see a lot of people working on different tasks scattered around inside and outside the warehouse where the floats were located. There were at least ten different floats inside warehouses at this location. There are thousand and thousands of roses and even onions here. My day there volunteering was a seven hour process including cutting, putting glue on flowers, delivering boxes to other volunteers, viewing of floats at the Rose Pavillion,  previewing of the China Airlines’ float performance, and conducting the interviews. I interviewed the volunteers and a dancer from the STC group. I also worked alongside with my other Lajajakids junior journalists friends to help out. We took breaks after in between volunteering then went straight back to work. For my first 2 hours I was cutting flowers. At about 11 am, we were gathered around the float to enjoy the preview of China Airlines’ float performance. All of the interviews I did were from China Airlines, but I also did a quick introduction to 24 Hour Fitness’ float. Each person can give a background experience of what is going on with them and what is happening.

China Airlines has participated in the Rose Parade every year since 1987. With this 2019 Rose Parade entry, China Airlines will celebrate its’ 33rd year participating in Rose Parade festivities. They have once again partnered with the Ministry of Foreign Affairs and Tourism Bureau. China Airlines’ float was the winner of the “International Trophy for the Most Beautiful Entry Outside of the the US” in last year’s 2018 Rose Parade. The float builder who created last year’s winning float was AES and their entry this year is through AES again.  AES has seven entries in the 2019 Rose Parade with five of those as sponsored floats. Their company has been creating floats for over 30 years. The designer of this year’s float is John Ramirez.

China Airlines float will have dancers dressed into traditional costumes with modern touches such as oversized gloves and sunglasses. The large dancer is covered in orange lentils, statice blooms, carnation petals, lots of mums, seaweed, spices and thousands of orchid blooms. We saw a glimpse of the performance and it is seven minutes long. They will perform the dance about 35 times through the length of the parade, which is an exhausting performance. They have practiced for this and have put in hard work into it with STC. Based on their website, “the STC Foundation was established by STC Management in 2012, for the purposes of introduction, promotion and appreciation of the Asian culture and its arts.” STC members and China Airlines’ Marketing Director for the Americas were present. The float performers are mostly 2nd generation immigrants who grew up in Los Angeles. On the float, were 3 giant prince which had colorful faces. They were alongside the other 10 dancers. The choreographer was born in Taiwan and was a professional dancer at Disneyland and performed the role of Mulan. She hopes it will be liked by the audience as beautiful Taiwanese art. There were beatings of drums while other performers danced. They used 40 kinds of natural flowers and grains of Taiwanese culture. There were about more than 500 volunteers who have helped to work on the float. The flowers had a very nice scent to them, and everyone was hard at work. You got to see the other floats and it was a great feeling.

The 130th Tournament of Roses Parade will start at 8 a.m. on Colorado Boulevard between Orange Grove and Sierra Madre for those who wish to see the live parade. There will also be television coverage for those who will be watching it is on screen KTLA, ABC, Hallmark Channel, NBC, RFD-TV, Univision and internationally. My family watched the live feed on Facebook last year.

There will also be an opportunity to view floats following the Rose Parade on January 1 and January 2, 2019. Floats will be parked along East Sierra Madre and East Washington boulevards in Pasadena, CA.  Advance tickets can be purchased through Sharp Seating Company. General admission tickets are $15 per person (free for children 5 and under). Ticket sales end 2:30 pm – 3:00 pm daily. The schedule is listed on the tournamentofroses.com as follows: 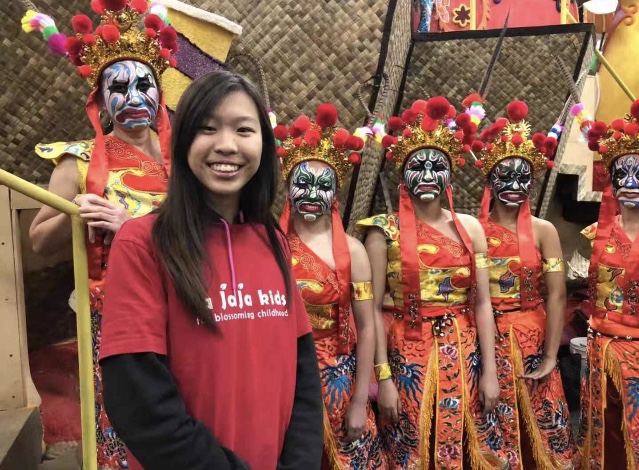 2018 is coming to an end very soon, and Pasadena’s annual Rose Parade is a great way to kick off 2019. Hundreds of thousands of people are looking forward to this event each year, many flying in from all over the world to witness the beautiful floats, marching bands, and horses crusade down the long road in person. Speaking of flying, one of the floats participating in 2019’s Rose Parade is from China Airlines. Embracing the parade theme of “The Melody of Life,” the airline’s magnificent float, “Rhythms of Taiwan,” captures the spirit of Taiwan through lively traditional dance performances and a booming drum line. In addition to the regular flowers used in the parade floats, this particular float features a variety of colored grains from Taiwan all over the structure, which encourages people to eat healthily and comfortably this year. Other floats in the storage room I was at included Universal Pictures and Dreamworks Animation’s float “How to Train Your Dragon” and

Besides learning about the beautiful float from China Airlines, I also had a memorable experience helping in the process of adding flowers to the float by doing some volunteer work. When we arrived early in the morning at Rosemont Pavilion, we were led to a table covered in pink and purple flowers with long stems that were had to cut. The petals were small and we had to cut off all of the petals with none of the green stem attached to them, which is much harder than it sounds. The flowers were prickly and the job was difficult, but we came out with buckets full of pink blossoms, and they looked very pretty. I wasn’t able to participate in gluing the flowers onto the actual float, but I was able to help out in cutting more flowers. After noon, bouquets of bright yellow chrysanthemums were brought in, and our next task as volunteers was the separate the bloomed flowers from their stems and apply glue to them, so they could be taken to the float to be glued on by other volunteers. It was a fun process, and seeing everybody work together was a great experience.

Volunteering is open to everyone who is willing to help out, so if you missed your chance this year, next year is another opportunity to consider being a part of the float production process. Let’s begin 2019 together on a lively note by going to the Rose Parade!