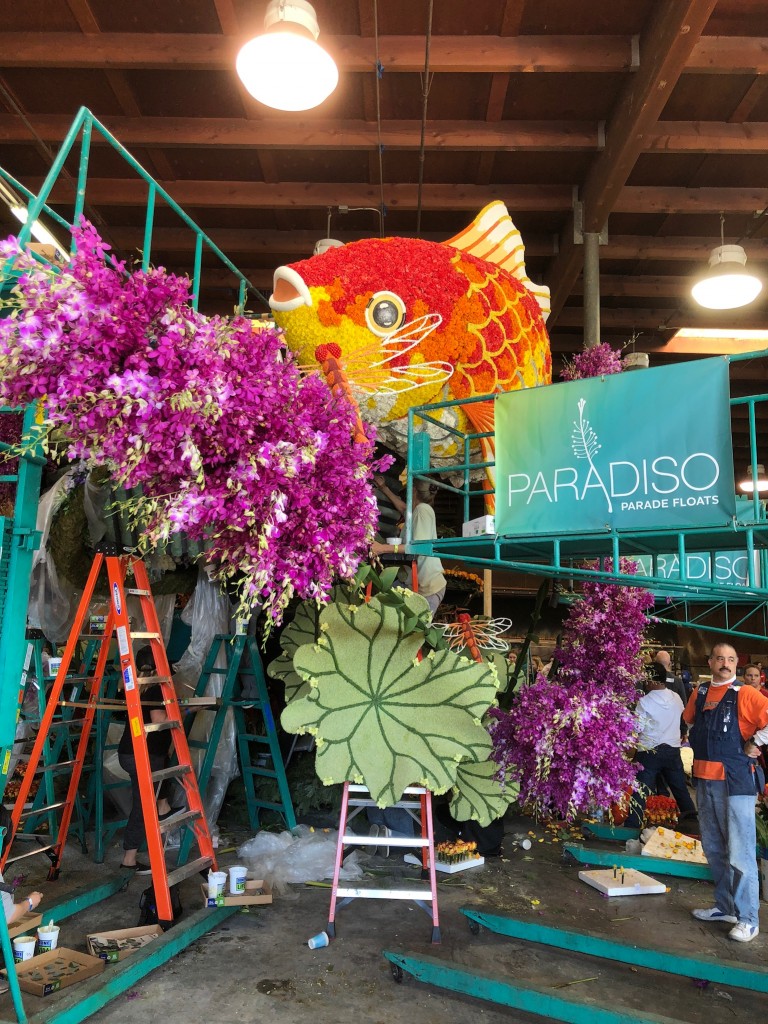 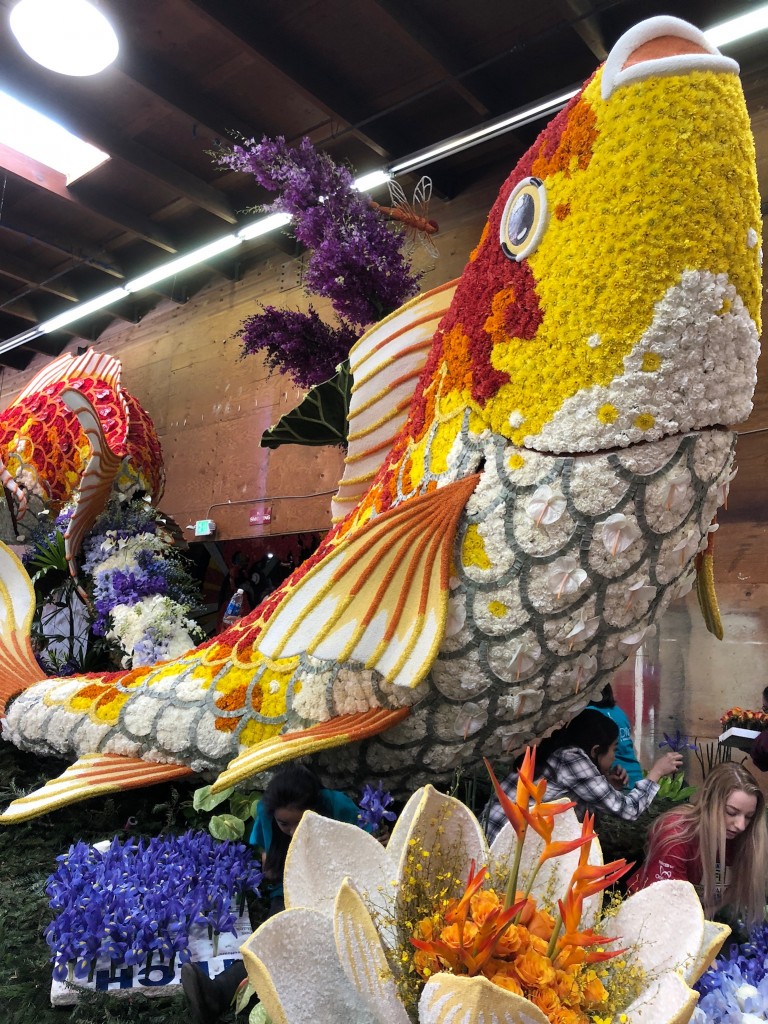 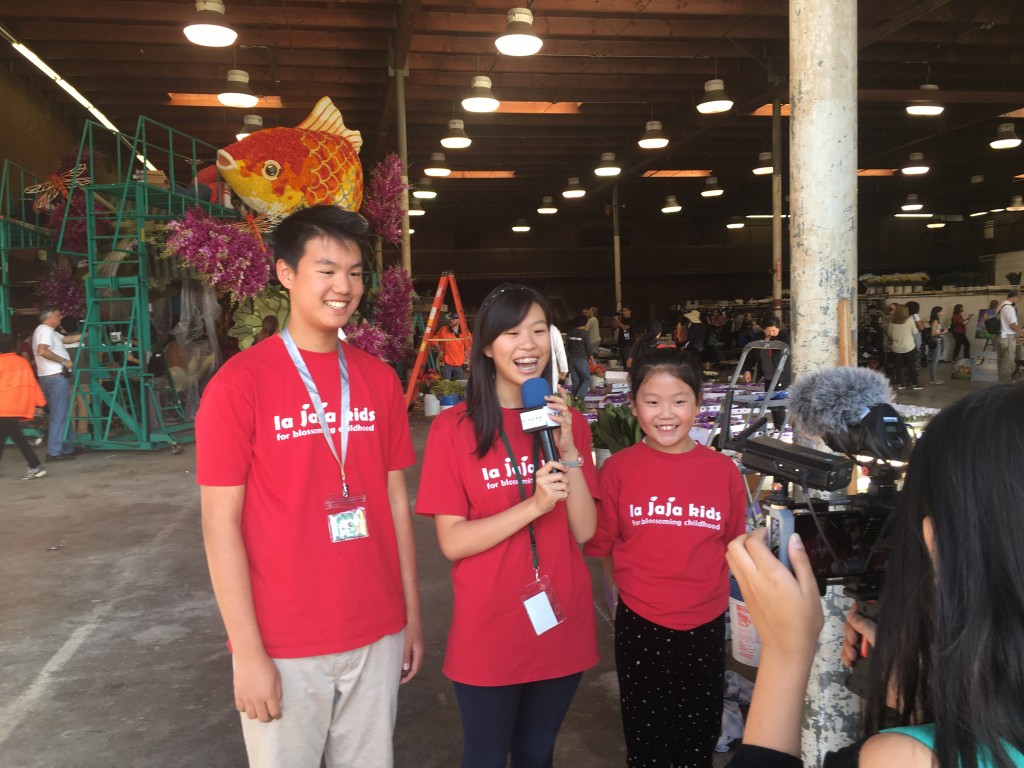 “Snip, snip, snip,” the sound of scissors when cutting flower and volunteers putting them into water tubes. Managers of the floats were giving meticulous orders. Volunteers were rushing to perfect their floats. This is the day when the final preparation of the 129th annual Rose Parade. When arriving at the pavilion, everyone was lively. The floats were preparing to head out to the Rose Parade. They are nearly done for judging.

The first float we saw was the Cal Poly University and California State Polytechnic’s float. The theme of the float is Dreams Takes Flight. The float had three cute critters-a kola bear, sea otter, and a red panda all flying airplanes. We interviewed Edward who is currently a senior majoring in mechanical engineering. He designed the movements of the airplanes on their floats. He told us that the hardest part of designing their float is the dimensions that they were given to work with. As a team, they have to make the planes move while working within the confines. They took one year to design their float, now things are looking up!

Let’s vroom to the next float. The next float is made by Amazon Prime. The theme is about Make Your Own Momentum. It was based on the famous British TV show The Grand Tour. This is a three-part float with ginormous wheels made of orange crush rose. On the wheel, there are the eight faces of the Grand Tour presenters. What amazes me is that they use subtle blends of Nigella, poppy seeds, and sweet rice to design the presenters’ face.

Next is the Singpoli American BD float. The theme of this magnificent float is Rising Above. The tale is based on The Carp and Dragon Gate. This year Singpoli will be the first float to ever have Augmented Reality. I am very excited to test out the new app because once you have the app on your phone you will be able to see animations of fish magically appear on your phone. Also, you will see fishes jump over the dragon’s gate and transforming into powerful dragons. Singer and songwriter Shila Amzah will be singing the theme song, “Rising Above.” The song is written by the famous composer Nathan Wang.

All of the 44 floats’ theme is based on the 2018 Rose Parade theme Making a Difference. We have seen many amazing floats today that were heading out to the road for the judging to begin. All the times and efforts dedicated by volunteers will finally pay off at the parade. Let’s start the countdown for the 2018 annual Rose Parade. 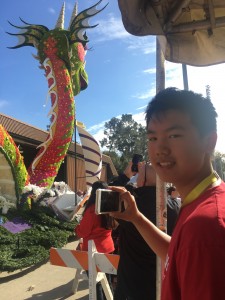 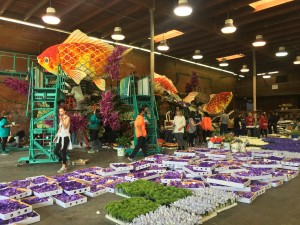 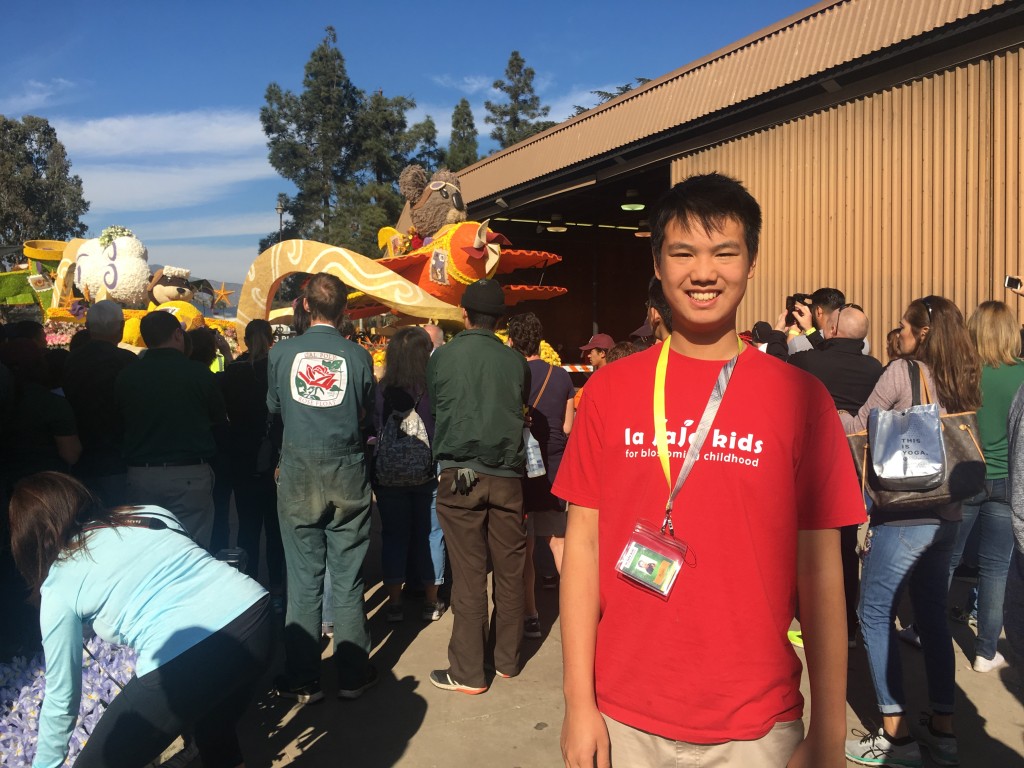 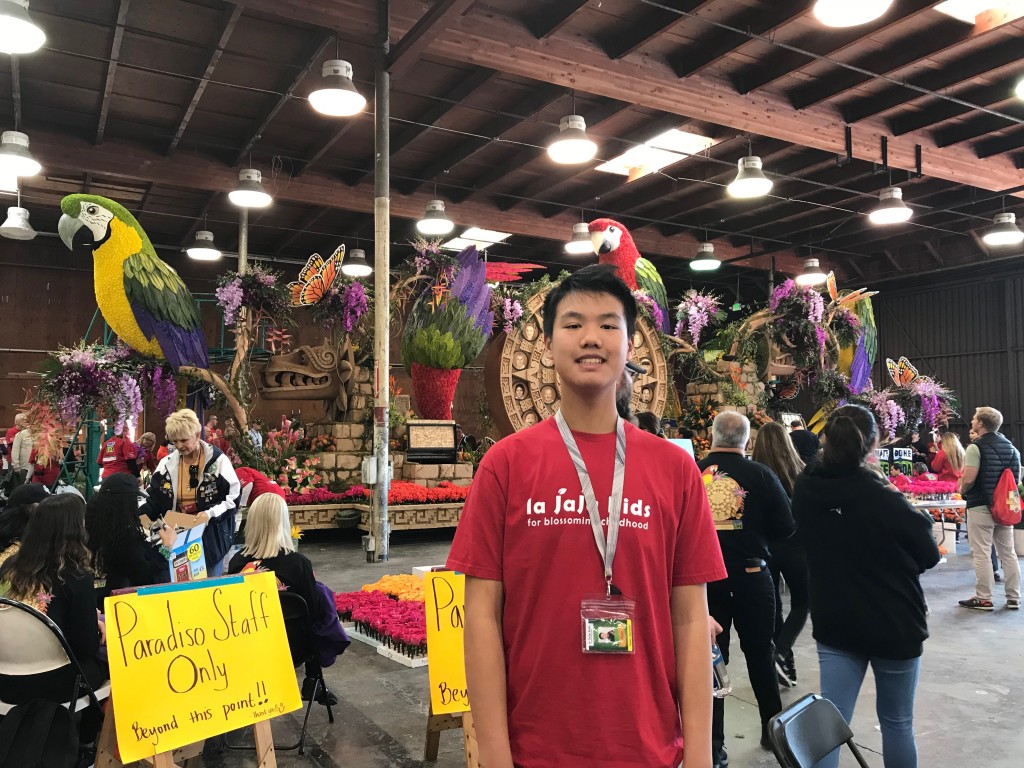 One day before the big day — one more day until the new year begins! Pasadena is starting off 2018 with a memorable event, the annual Rose Parade. It’s the day before the parade, and the designing, engineering and volunteering teams are in frenzy mode, perfecting the paint on the floats they are working for and adding the final flowers, doing final checkups and the works.

Inside the Rosemont Pavilion at the Rose Bowl, where some of the floats are being stored before showtime, the energy was so strong you could smell it. Literally. There were so many flowers on the floats that the fragrance was almost overwhelming. One of the floats there was Donate Life’s magnificent work, The Gift of Time. If you check this beautiful rose float out, there are pictures of many people on a wheel on both sides of the structure. Those pictures are made out of thousands of seeds and are the faces of organ donors. The people riding on the float tomorrow are the recipients of these donors’ organs. So these donors have given people the gift of time for life, a chance to continue living their lives.

Some other floats in the barn include Amazon Prime’s float, which is based off of the well-known British television show Top Gear. You can see the float in the video, with its enormous wheels adorned with orange flowers. Another float is Cal Poly State University’s float, run by its student volunteers. Today I met Edward, who designed the movement of the airplane on their float, themed “Let Your Dreams Take Flight.” He explained the biggest challenge of designing the airplane’s movements, which you can also hear in the video.

Last but not least, Singpoli American BD’s float was also kept in the barn for some final touch-ups. Like every other float, volunteers and workers were busy all around the float. But in case you didn’t know, Singpoli’s float will be the first of its kind, because it will enable Augmented Reality. If you download Singpoli’s App and use it to detect the float on the day of the parade, the float will come to life and display the amazing transformation of a carp trying to jump over the gate over and over again until it finally succeeds and becomes a dragon, as in the traditional tale of The Carp and the Dragon Gate. Malaysian singer-songwriter Shila Amzah and renowned composer Nathan Wang will be the people riding atop the float, and Shila will be singing the theme song of the float, “Rising Above”.

The theme for the entire Rose Parade for 2018 is Making a Difference. Today, I’ve only seen a few of the floats that will be featured in the parade. On New Year’s Day, all the floats that have costed the effort, time and dedication of many people will be exhibited in their final and best form. There will be many amazing things to see tomorrow, so grab your chairs and blankets, some food and a camera, and enjoy the start of a new year! 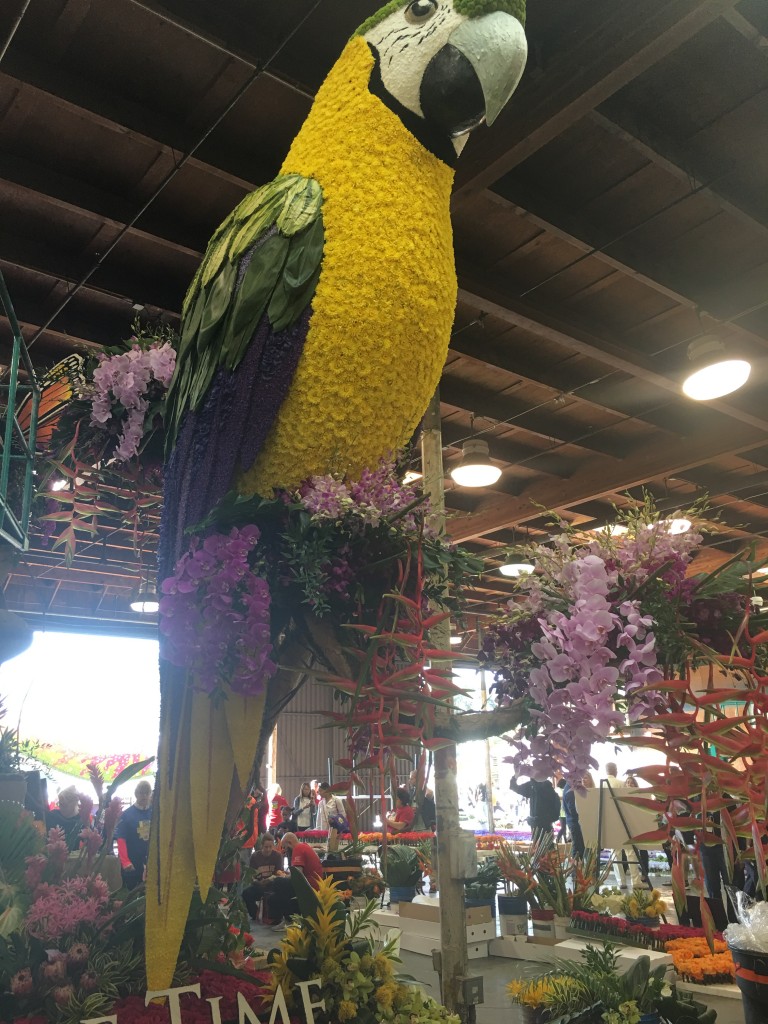 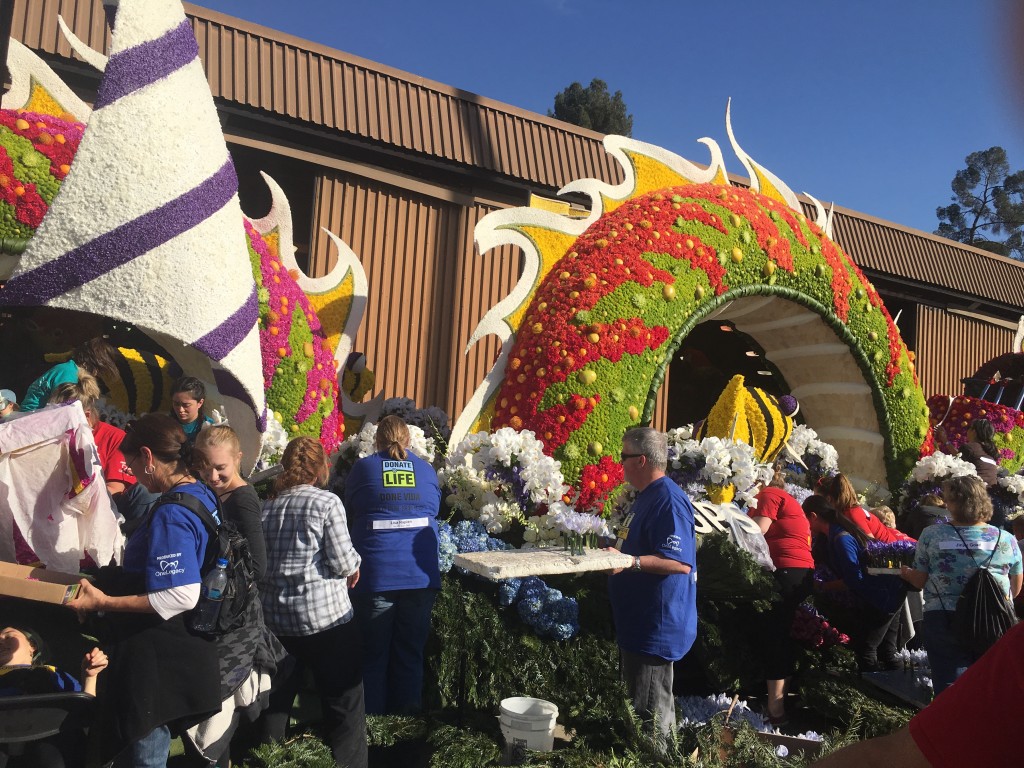 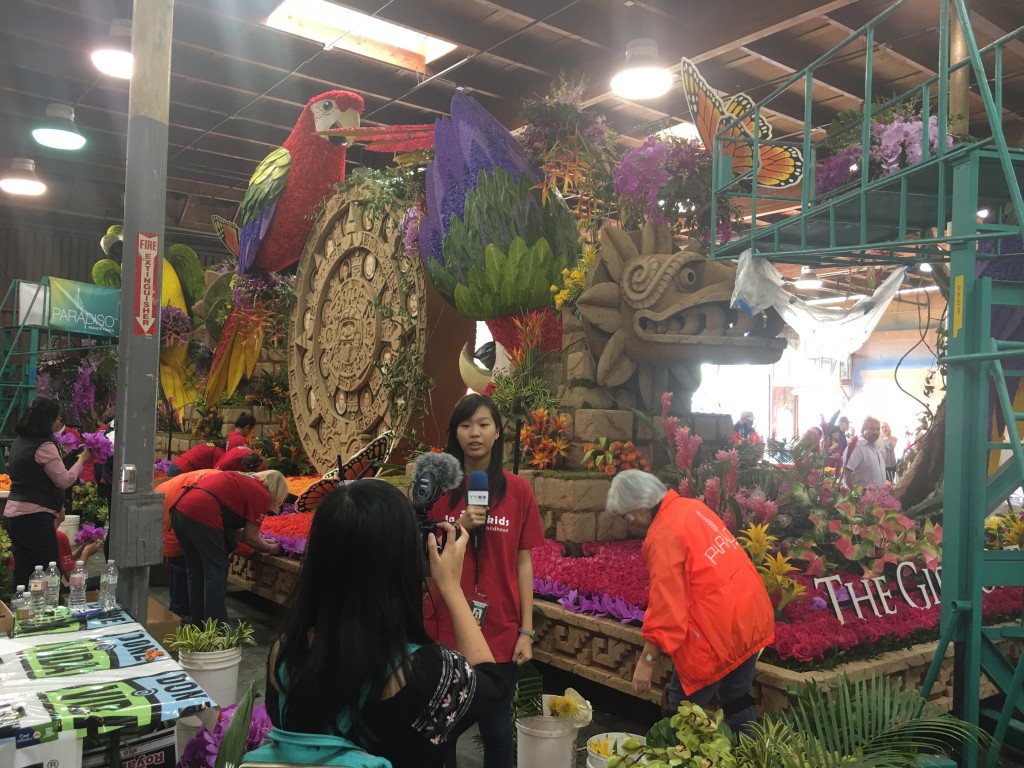 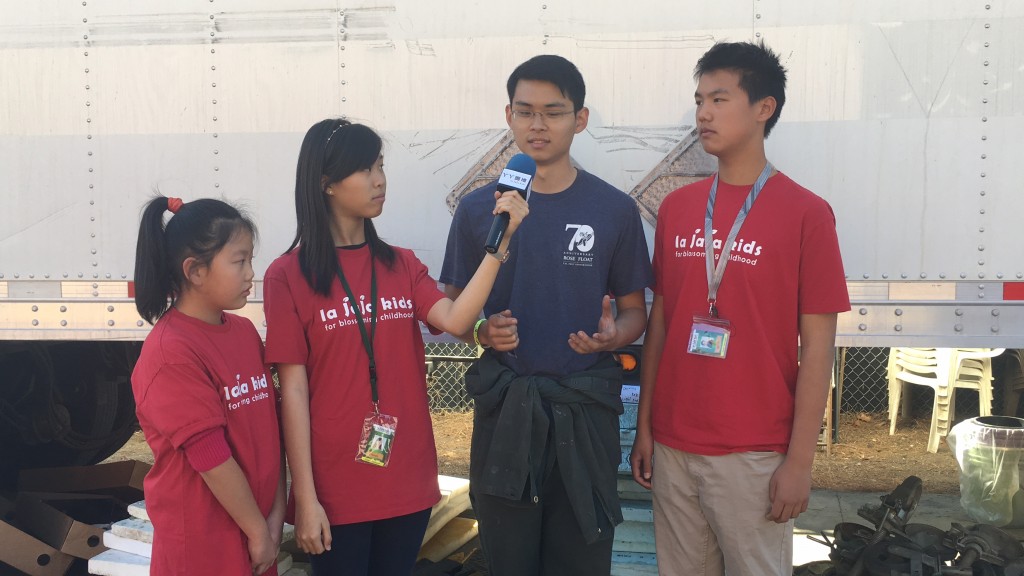 Today Ryan, Karen and I went to the Rose Bowl Float Parade for last-minute preparation viewing. It is very exciting to see the judge select the best one of the year 2018. We visited 5 beautiful floats made of the fragrant-smelling flowers. Let’s check it out!

The first float has two aircrafts on it, big orange one and small yellow one. The big one has Koala sitting on it. The small one can tip left and right when float is moving. That is so cute!

2nd float’s main part are 3 pairs of giant wheels connecting by gears. The origin is from the famous British TV show, “Top Gear”, sponsored by Amazon Prime. It wants to deliver the same spirit of “Make your own momentum”!

The third one is “Books Bring Dreams to Life”, sponsored by UPS Store, which is the most popular express courier across the country. The float is featured by the humongous Dragon and 2 pirates sailing on the books, which indicates reading books can explore your imagination to go WILD!!!

The 4th one is “The Gift of Life” about the 22 human beings who saved many lives by donating organs to the people in life danger. On the float, there are colorful parrots and a round, brown flat circle with those respectful people who deserve our memory.

Finally, the most exciting float is “Rising Above”. The theme is the story of how hard the fish jump over the dragon gate and succeed to turn into the dragon. It tells us “Never give it up”! The specialty of the float is AR Technology APP that can make the fish jump as if it was in front of you. The sponsor is Singpoli American DB who is one of the major vendors in this year! I cannot wait to see it in parade tomorrow!!!