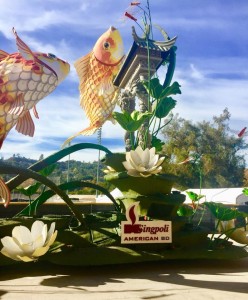 When the Rose Parade was first launched in the 19th Century, it showcased entertainment innovations that would define New Year’s Day for millions of Americans. 128 years later, the Rose Parade will take a leap into the future when it debuts its first ever float to use augmented reality.

“Rising Above,” sponsored by Arcadia-based Singpoli Capital Corporation and American BD Investment Group, will feature fully animated carp animatronics, waterfalls and mist effects. However, viewers both along the parade route and at home will be able to scan the float with a special app, designed by Pasadena developer Interactivism. From there, they’ll be able to interact with characters from the float, and follow along the classic Chinese tale of a fish who transforms into dragons.

“Rising Above” will join other parade regulars, such as Donate Life, Kiwanis International, Lions Club and many local cities. 39 floats have been announced so far, setting a high bar for Singpoli’s augmented reality float to beat. 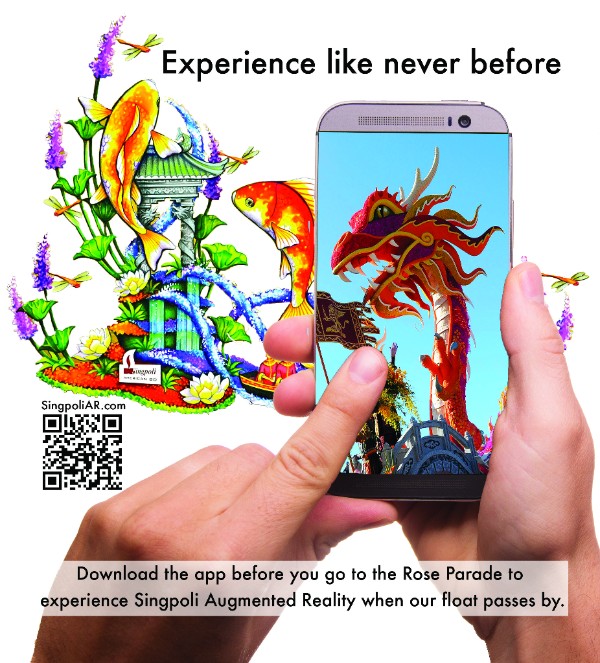 Digital product design agency in Pasadena. Interactivism developed an app that could scan the float, and provide additional animations. Those character animations can also feature in selfies that can be shared across social media platforms. Visitors to the float after the parade will be able to enjoy the experience.

Interactivism also made sure that users wouldn’t need clunky headsets or equipment, which can often prove a barrier to augmented reality. The app will be available at Singpoli’s augmented reality website for both Android and iOS, with instructions going live on Dec. 22. Cesario said that the app will be as easy to use as any phone’s camera.

It’s just about time to say hello to the new year! Since 1890, the Pasadena Rose Parade has been held on the New Years. Various companies have created gorgeous floats for the parade. Today, a few junior journalists and I got the opportunity to go to the 2018 Singpoli American BD rose parade float press conference and talk to the team behind the float.

This 2018 will be Singpoli American BD Company’s fifth year entering the annual Pasadena Rose parade. For all the years that Singpoli has been doing the rose parade, Paradiso Float design. All of Singpoli’s floats have won awards: the Extraordinaire Trophy in 2015, the Sweepstakes Trophy in 2016, and the Fantasy Trophy in 2017.

This year, the Singpoli float is based on the legend of the dragon gate. The tale tells of fish that go through struggle and must persist through difficult waters to jump over the dragon’s gate to become a magnificent dragon. This is also the first ever float to incorporate AR (Augmented Reality) into the float. Singpoli and Paradiso teamed up with Interactivism, a digital product design agency based in Pasadena, California. The float is quite large and has multiple fish decorated colorfully, eight waterfalls plus mist, a detailed replica of the dragon’s gate, and more. Malaysian pop star Shila Amzah will be on the float performing the theme song of the float titled “Rising Above” composed by Nathan Wang.

After the educational press conference, all the reporters, journalists, and cameramen rushed to get interviews with the speakers. Though it was quite competitive, we managed to grab Charles Meier from Paradiso Float Design who had designed the float; Kin Hui, the CEO of Singpoli American BD; and Ms. Cesario, a representative of Interactivism.

I had a great, educational experience at the press conference and got a sneak peek at a float that will be proudly displayed. I got the opportunity to meet the people behind the float and learn all about the tale and about the AR technology that’s added to the float this year. Make sure to catch the Rose Parade on January 2nd, 2018!

Each year the city of Pasadena has a breathtaking event called the Rose Parade. Each float shows an amazing amount of creativity, and colors. The float of Singpoli American BD is an example of what a float would look like in this year’s 2018 Rose Parade. I got to speak to some of the people who put their effort to make success in the float of Singpoli American Bd. Their float is a taste of Chinese culture.

One of the most important person in the organization is Kin Hui, the CEO of Singpoli American BD. I got the opportunity to learn from him about his float. This year they designed an app that uses the augmented reality technology. It allows you to see special effects over their float. “Our float is a reminder that even though our journeys can be difficult, and painful, we can rise above adversity” said Kin Hui. His quote means that to accomplish a goal you must go through difficulties, and hard effort to achieve it. Mr. Hui, and his team put hard effort to make the float what it is now. Riding the float is Shila Amzah. She will sing the song “Rising Above” which is written by an award-winning composer Nathan Wang.

The float comes with a app that is able to view the float like never before. It uses augmented reality, and viewers will be able to see the float in aue of the special affects added to the float on their phones. Beautiful animations of fish with bright colors, and it will make the story of the float come to life. I talked with Ms. Cesario from Interactivism of the app, about the app. If you pointed your phone at the float you can see the spectacular animation that is the highlight of the float. You can experience looking at the float in a new way! The stimulating experience will not only let you see the float in an amazing way, you will also be able to take photos with the app, and share it with friends, and family members.

Another person I interviewed was award winning float designer Charles Meier. “The theme of the Rose Parade this year is “Making a Difference” said Charles Meier. The float based is a story of the Dragon Gate. The story is about the fish that search for the source of the Yellow River, which is the Dragon Gate. The fish have to come across a lot of hard effort. I interviewed Charles Meier about how he came up with this design. You must take time to see the world around you, and when you open your eyes, and make something of your own the beauty comes to you. The float captures the scene of the story where the fish try to jump over the Dragon gate, so they could become dragons. The float shows three magnificent statues of fish with the colors red, orange, yellow and white all blended into their scales, trying to jump over the gate. The float has waterfalls that make the scene more realistic. The fish wobble as if they were alive, and were trying to become a dragon.

What I learned from this interview is that if you want to achieve something great you need to work as a team, and be resistant to overcome hardship in our life. 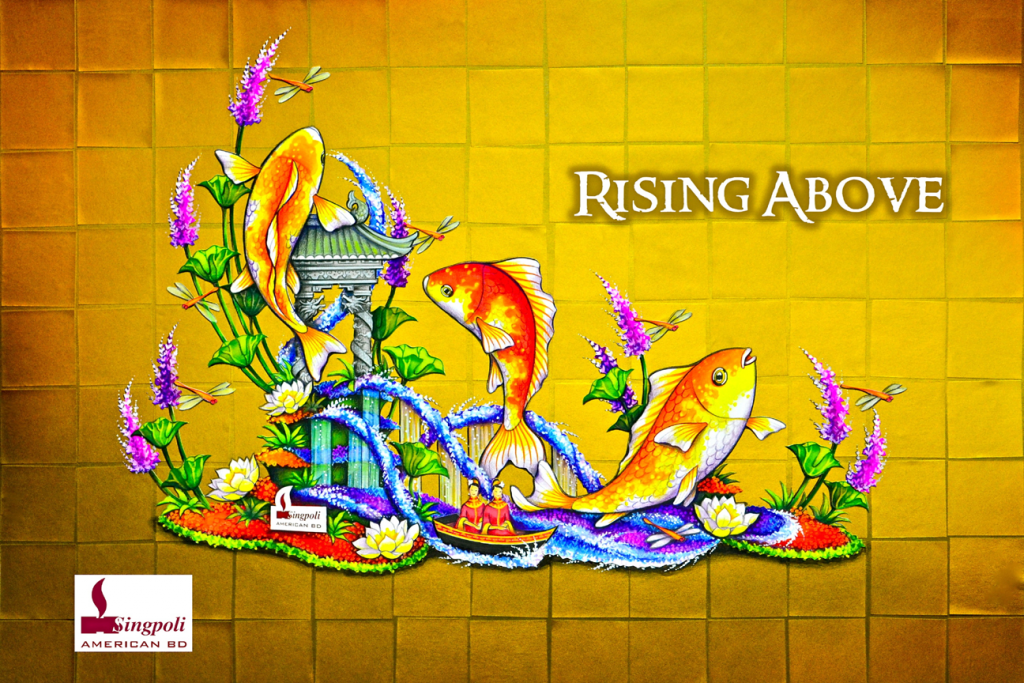 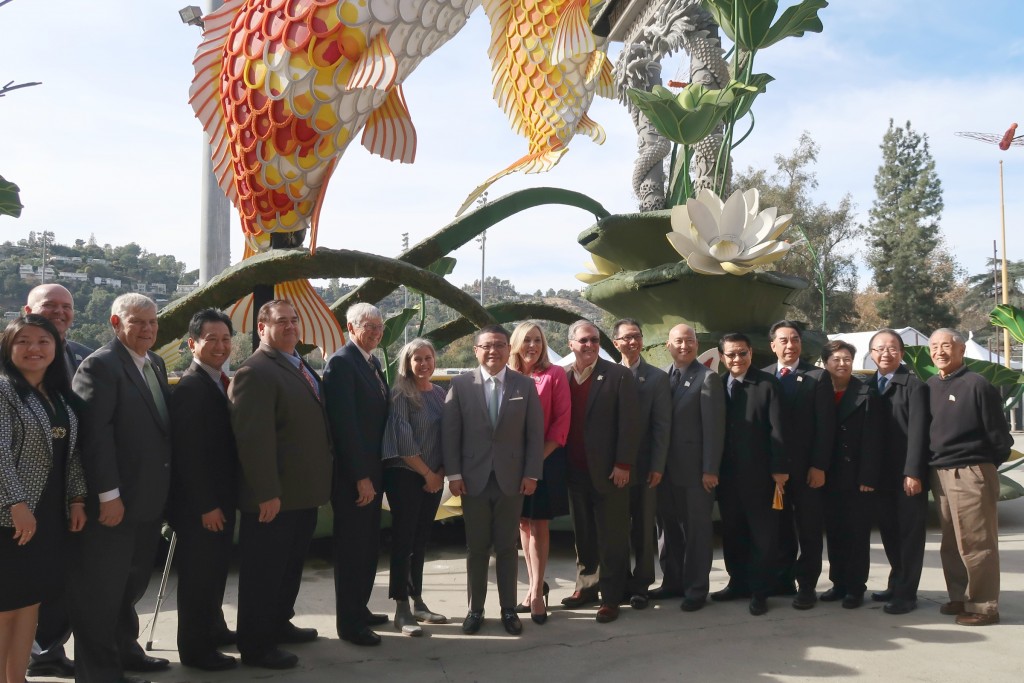