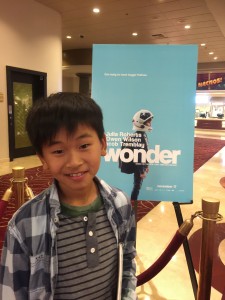 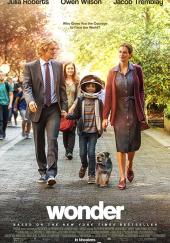 Watching  “Wonder” was a sensational experience!  I read the book three times before I had a chance to see the movie.  Even though I know the ending, I enjoying watching this heartwarming story come alive!  What I love the most about this movie is the message of kindness and courage.  The movie positively portrays the importance of being kind and being brave, and that you should never judge a person based on their look.
The actual movie is about a boy named August Pullman who has a deformed face.  August, also known as Auggie, prefers to hide his face under an astronaut helmet because of his facial difference. Up until  5th grade, Auggie has always been home schooled.  Starting his 5th grade, his parents decided to send him to a normal school.  Auggie has a lot of challenges laying in front of him entering a mainstream school for the first time.  However, soon he realizes that many people he cares about also have their own issue.  His sister Via is a very kind and sweet girl.  But  she also tries to find her own acceptance at home and in school.  Another main character is Jack who is a friend of Auggie.  Jack understands that a person like Auggie needs a friend like him.  But at the same, Jack also befriends with Julian who likes to bully Auggie.  How is Jack going to choose his friendship between a bully and a true friend?  Another friend of Auggie is Summer.  Summer is the sweetest girl at Beecher Prep.  Even though she is adorable and kind, she also struggles deciding whether to be kind or be popular.
I highly recommend everyone to see this movie this weekend. The book should also be in every child’s bucket list.

“You really are a wonder, Auggie.” When Julia Roberts, August Pullman’s mom, uttered those words, I instantly tried to hold back tears. A heartwarming movie like this can even make a pro-wrestler cry. Having read the book numerous times, the movie did add, change, and take out some key parts. For example, in the novel by R.J. Palacio, Summer sits with Auggie on the first day of school. Also, Summer and Justin play larger roles in the novel, but the dad has a large role in the movie. There is only a short part of Julian and his parents in the movie, but in the book, (The Julian Chapter), the author goes into more detail.

This movie is great for families of all ages. Kids ages 8 and older should read the novel first, to get more in-depth. Younger kids might get scared of August’s face, but one does get used to it. Jacob Tremblay was excellent as August, and Owen Wilson, (the dad), had many funny lines. This movie should definitely be on everybody’s MUST-WATCH list this Winter. Make sure to get popcorn, as it is quite long. (113 minutes) See you at the movie theater! 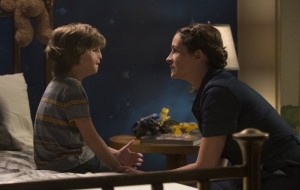 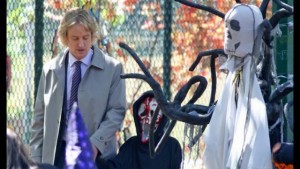 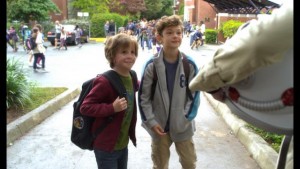 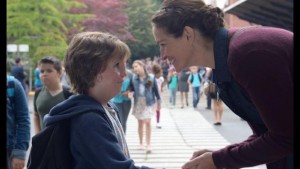 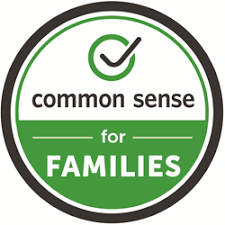 WHAT PARENTS NEED TO KNOW

Parents need to know that Wonder is an earnest, emotional family drama based on R.J. Palacio’s award-winning novel of the same name. It centers on Auggie Pullman (Jacob Tremblay), a young boy with a genetic facial difference. Auggie meets both cruel bullies and good friends as he attends school for the first time; his supportive family (including his parents, played by Julia Roberts and Owen Wilson) is always there for him — even when he tries to push them away. The movie has clear positive messages about choosing kindness, appreciating everyone for who they are (rather than what they look like), and true friendship; empathy and perseverance are also strong themes. There’s some fighting among tweens/young teens and sad moments involving a loss. Language includes name-calling and insult words like “shut up,” “jerk,” “freak,” and “deformed,” as well as an “oh my God” or two. Teens kiss, and adults flirt/exchange mile innuendo. A teen character finishes her mom’s abandoned glass of wine after her mom, who’s going through a difficult divorce, falls asleep/passes out.

IS IT ANY GOOD?

Based on R.J. Palacio’s hugely popular, award-winning novel, this drama is earnest and sweet, with great messages about kindness, friendship, and acceptance for its tween target audience. Whether they’ve read the book or not, kids are sure to appreciate Wonder‘s take on how hard it can be to fit in and feel good about yourself, no matter what you look like. By mirroring the book’s structure and giving viewers first-person glimpses of how the world looks to characters other than Auggie (Via, Miranda, and Jack Will all get their moments), director Stephen Chbosky helps build empathy, which is an invaluable skill for viewers of all ages. That said, the perspective-switching isn’t consistent enough for it to totally work as a storytelling device in the film; plot details are brought up and then not really given closure, and the choice of why some characters get to tell their own stories while others don’t isn’t really clear.

But thanks to an emotionally resonant script and strong performances by the cast, quibbles like that can be mostly ignored. Roberts and Wilson are well-matched as Auggie and Via’s parents, Tremblay emotes well even under heavy prosthetics and makeup, and Vidovic pulls off the challenge of playing a moody teen without making you roll your eyes at her. In the supporting cast, Hamilton’s Daveed Diggs is engaging as Auggie’s believably inspiring teacher, Mr. Browne; Mandy Patinkin is all grandfatherly charm as school director Mr. Tushman; and Jupe is excellent as Auggie’s friend Jack Will. A scene in which he reacts to the aftermath of a hallway fight is an astounding bit of child acting. In the end, while it’s not hard to see where Wonder is going, getting there is a valuable, uplifting journey, especially for kids.

TALK TO YOUR KIDS ABOUT …