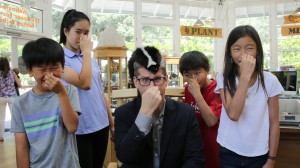 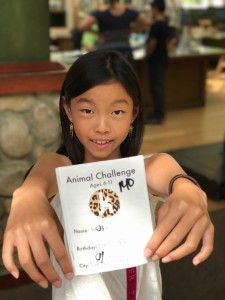 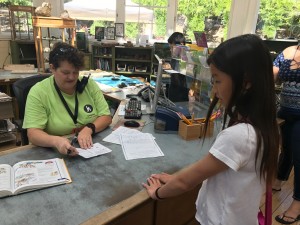 I’m Phoebe and I’m a junior journalist at lajajakids.  On June 13, 2017 Angeline, Sean, and I went to kids space to interview Michael, the CEO of kids space.

Michael never thought of becoming the CEO of kids space.  He wanted learning to be interesting and fun.  So he worked at kid museums but it wasn’t as fun.  He decided to open an opportunity to all kids to learn in a fun and interesting way!

Today the population of kids space is more than 12,000 people per day!  People who helped make kids space were children, neighbors, and some other people.  Kids space is full of creative and imaginative ideas for kids and some places even have places where kids can build their own things!  They also have tests to see your intelligence from kids space, and if you get one wrong, they ask you some questions and give you some clues!

Some interview questions we asked Michael were like did you ever dream of becoming the CEO of kids space or what are your favorite memories at kids space or how do you imagine kids space 5 years from know?  These are all questions that he answered pretty quickly with.  If you ever become the CEO of something or already are then one tip is don’t keep ideas to yourself and share them to see if other people like it. That is what Michael did with kids space staff he discussed some things and ideas and either people agreed or disagreed.

While we were interviewing Michael, we went to different stations/ places in kidspace.  We got to know more about them when we were interviewing him or just talking to him.  That let us know more about the place.  Michael’s favorite place was the creative forest, something like that.  It was a place where there were different stations to work on creative things like building with foam boxes and turning a wheel to activate a fan.

I never really thought about who made or discovered kids space before.  All I thought was about all the fun of kids space.  Michael’s life and interest really brought out kids to learn and have fun while they are learning.  This trip was quite amazing to unleash the power of learning.  So that is all for the whole experience of kids space. 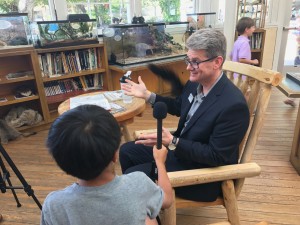 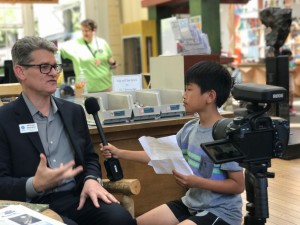 How do you make learning fun? Visiting all the interesting exhibits Kids Space has to provide will answer this question. On my visit to Kids Space, I interviewed with the CEO of this museum, Kris Popvich.  During my visit, I passed by lots of cool things.  My favorite was the Hawk’s Nest which is located by the Arroyo Adventure, the newest extension to the museum.   The whole structure is basically  a treehouse that looks like a nest, and it has a rope bridge for kids to cross. I also experimented with the water pressure that made me wet all over my legs!  The CEO stated that in order for learning to be effective, it must be fun!

I learned a lot by interviewing with the CEO.  First,  Mr. Popvich used a backstory on how he was a kid to answer my questions.  He would also answered my questions in a way that totally surprised me.  For example, I asked him if he was afraid of bugs.  He answered no, but then surprised me by throwing a skunk skin at me!   He emphasized the importance of making learning fun.  His job as a CEO is to gather all these crazy experiences in his museum so that children can experience and learn.

After the interview we got to relax and tried some of the exhibits. Ant holes, bottle rocket, cool fan, indoor climbing, and so much more. I would love to come back to KidsSpace to  experiment and learn. 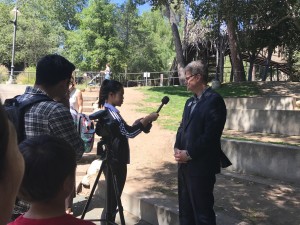 On June 11th, 2017, three children went on a journey to learn more behind the secrets of Kids Space Museum. We wondered, “How did Kids Space Museum create such a wonderful environment for children to learn?” Some interesting things I wanted to learn about Mr.Shanklin was how he got his position as CEO and how he dealt with problems as a child.

“What are some ways Kids Space Museum helped children finding what they are good at?” Mr.Shanklin responded with a very passionate voice and with a very intriguing answer. When I asked this question, his first few words were, “That’s a great question. This is one of my favourite question.” Shanklin talked about how it wasn’t just his decisions. It was the entire staff who helped Kids Space into the great community it is now. One part of his answer that really captured my attention was, “ Kids learn differently. Some ways that kids learn are: visually, hands on, or by audio. So the board decided to make different exhibits showing these different forms of learning.” I found this very interesting because I learned the different ways of learning and how Kids Space helped kids in different formats.

The first time I went to Kids Space I didn’t get to ‘play’. It looked so fun and I never realized that it was educational. I begged my mom to let me wander and explore the wonderful environment Kids Space created. I made up random reasons and excuses for her to let me go and explore. I saw Kids Space and I was in awe. Now that I’m older I understand and am now more curious. Kids Space gave me a different perspective on fun ways for kids to learn. When I interviewed Mr.Shanklin, I learned more in depth of Kids Space Museum. I envisioned the interview in my head a few times and when it really happened, it was a whole lot different.

I expected the interview to be long, boring, and unclear. I thought that the CEO would have no interest by being interviewed by young children. It turns out Mr.Shanklin and the entire staff loves children and helping children. Mr.Shanklin loves helping kids and loved explaining things ‘we’ don’t understand. As I said he responded with passion. His eyes grabbed my attention and I was dumbfounded by the answers he gave. They were the perfect length and they gave great definition. Although that I am now older, the interview gave me the same feeling I got when I first came to Kids Space. The interview wasn’t just fun to do, it also gave me a better knowledge.

Kids Space Museum is a great place for kids to learn and have fun at the same time. Age does not determine anything, because in this interview, I felt like a child again. I saw the happy faces on all the children and the parents. I expected this interview to turn out differently, but I’m glad that the way it turned out was better than how I envisioned it. I learned a whole lot more and enjoyed hearing Mr.Shanklin talk. If you have the passion for something, go for it, no matter what happens, at least you know that you tried. Kids Space Museum did that. They had the passion to help kids learn in an exciting and fun environment, and now they are helping many kids of all ages.