We first met Jessica Leung at the annual gala of  Youth Science Center late last year, in which she accepted the High School First Place award at the YSC STEM Essay Contest. In our interview with her about her winning, Jessica shared her passion about science subjects and her motivation to become a scientist when she grows up.

Here is Jessica’s article about her time at the Galapagos with the amazing species of reptiles.

To hear what Jessica has to say about her winning of the STEM essay contest, click the video clip below to watch:

A school trip of a lifetime for this southern California reptile lover.

Growing up, I have had the pleasure of keeping a few reptiles: corn snakes, green iguanas, and Chinese Golden Box turtles. So when I was presented with the opportunity to visit the Galapagos Islands, I was extremely excited about finally getting a glimpse of the various reptiles on the island, especially the marine iguanas. The Galapagos Islands is a volcanic archipelago flooded with unusual organisms that evolved separately throughout the years due to geographical isolation. 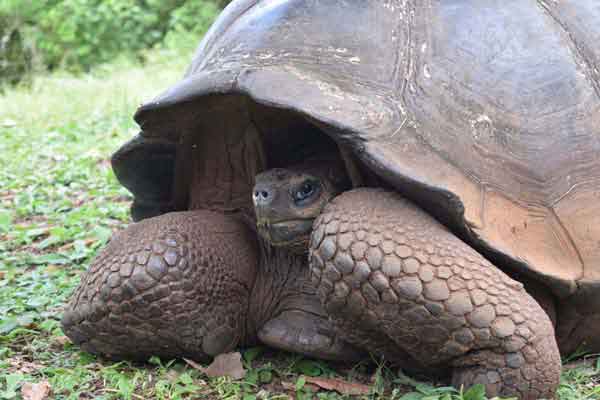 The Ecuadorian government recognizes the islands as a national park site and only allows three percent of the island to be occupied by locals. As a result, most of our trip was guided and monitored to ensure the preservation of the local environment. Fortunately, the various conservation projects led by the government has helped retain a diverse wildlife of reptiles that are endemic to the island. 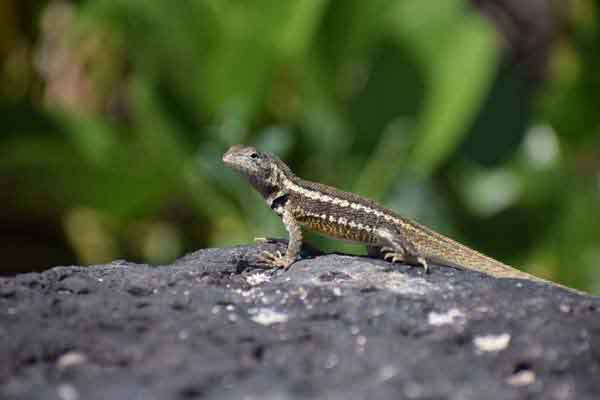 Lava lizard perched upon a rock. by JESSICA LEUNG

I was humming with delight and anticipation as I was packing my suitcase, knowing that I was moments away from coming in contact with a marine iguana (Amblyrhynchus cristatus), a unique subspecies of iguana that is indigenous to the Galapagos Islands. Marine iguanas can grow up to three feet in length, which is a common size for all iguanas. However, due to harsh weather conditions and famine stricken periods on the island, marine iguanas have gained the unique ability to shrink in size when food is scarce. They are currently the only known vertebrates that are capable of doing so. These prehistoric-looking reptiles have evolved their diet to consist of the nutritious algae located on rocks in the intertidal zone of the islands. Due to the location of their food source, the marine iguana is the only iguana species that has the ability to dive up to nine meters underwater and hold their breath for up to forty-five minutes. 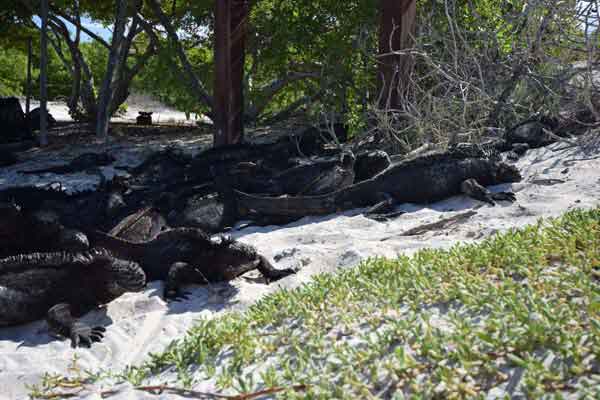 A colony of marine iguanas relaxing on the sand at Tortuga Bay. by JESSICA LEUNG

My most memorable contact with an iguana colony occurred at Tortuga Bay. The colony basked in the sun, totally unaffected by our presence. It’s a pity we were not visiting during mating season, as their colors drastically intensify to include an array of stunning greens, reds, and grays.

However, the lava lizards (Microlophus albemariensis) were able to satisfy my aesthetic craving.

Some of the most intricate patterns and colors I have ever seen on a reptile fit on the small bodies of lava lizards. Armed with colors that are associated with danger, like bright reds, yellows, and oranges, they do pushups with their forearms to ward off intruders who have trespassed into their territory. Lava lizards are also a great demonstration of adaptive radiation, as lizards on different islands vary in size, coloration, and behavior. They are able to adapt quickly because they reproduce rapidly. Female lizards reach sexual maturity at the young age of nine months, producing up to six eggs per month. These reptiles are also extremely versatile omnivores, eating anything from tiny insects, to geckos, and even scraps of human food. They were so abundant on the islands that in every direction I faced, a lava lizard could be spotted, perched upon a lava rock on high alert.

Although lava lizards have since thrived from the conservation of the Galapagos Islands, the tortoise population of the archipelago continues to struggle.

The Galapagos Islands were named Ecuador’s first national park in 1959, and have since established multiple tortoise conservation projects which have released up to two thousand individuals back to their home islands. Despite these efforts, human conservation projects came too late to save all subspecies of the tortoise population, which is evident from the death of Lonesome George, arguably the most famous of the giant tortoises. Lonesome George was the sole survivor of a subspecies of tortoise (Chelonoidis nigra abingdonii) found on the island of Pinta. His death in 2012 shocked the world, and raised a lot of awareness to the wildlife conservation projects in the Galapagos, a silver lining to this tragic event. 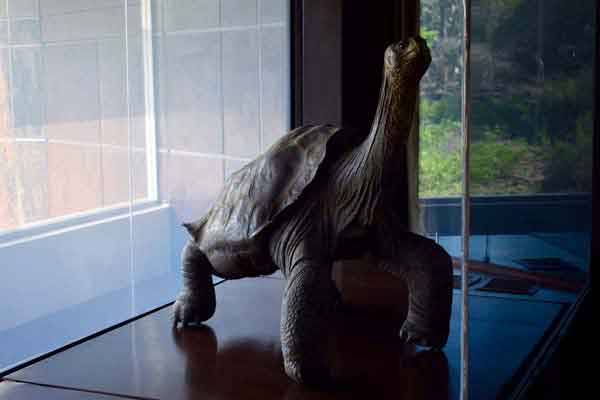 Lonesome George on display at the Tortoise Breeding and Rearing Center in Puerto Ayora, Santa Cruz. by Jessica Leung

Part of the study of evolution is to maintain and support the prosperity of a diverse range of flora and fauna. Without these amazing and undisturbed animals, Charles Darwin probably would never have made the observations necessary for his theory of evolution.

Immersing myself in the main laboratory where Charles Darwin theorized about evolution was an experience that I will never forget. I was taken aback by how much wildlife there was in contrast to humans, and how the animals there were not afraid of human interaction. It was as if they were forgiving us of our past mistakes, and giving us a second chance to conserve their beautiful home and fellow neighbors. We, humans, should live up to these expectations, and treat the islands, its inhabitants, and all other wildlife on Earth with the respect they deserve. It is easy to forget the destruction we cause the Earth on a daily basis, but seeing how wonderful life is when humans and animals live in harmony at the Galapagos Islands really is a wakeup call for me, and hopefully, sharing my experiences with others will raise awareness for wildlife conservation.