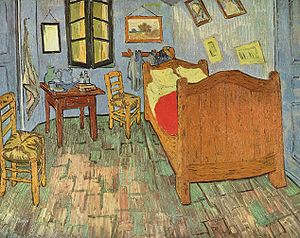 Vincent van Gogh painted three versions of his Arles, France, bedroom — its crookedly hung paintings set within narrow confines — from 1888 to 1889, while staying at the psychiatric asylum at Saint-Rémy-de-Provence. Soon the second in the trio will be exhibited for the first time on the West Coast.

The Norton Simon Museum will be staging a special exhibit of Van Gogh’s “The Bedroom” starting in December. The piece is on loan from the Art Institute of Chicago, its permanent home. The other two versions of the painting are at the Musée d’Orsay in Paris and the Van Gogh Museum in Amsterdam. 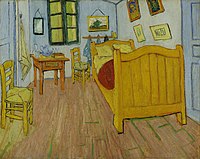 With its butter-yellow bedstead and bottle-green window, its rush-seated chairs and lavender walls, Vincent van Gogh’s bedroom at Arles is surely the most familiar and beloved domestic interior in all of Western art. Van Gogh painted it three times: once in situ, in the fall of 1888, and twice a year later, from his asylum cell at Saint-Rémy, working from memory and from the original painting. This December, the Museum welcomes the second of these pictures—on loan from the Art Institute of Chicago—displaying this masterpiece on the West Coast for the first time ever.

The Chicago Bedroom—Van Gogh’s meditation on friendship, hope and regret—serves not only as a kind of self-portrait but also as a symbol of the artist’s peripatetic existence, his search for an elusive sense of repose. In his brief life (just 37 years), Van Gogh sought a place to call home in four countries and 37 residences. In only one place did he find something approaching contentment: his leased rooms at No. 2 Place Lamartine in Arles, the so-called Yellow House, where he dreamed of establishing a “Studio of the South.” He painted his first version of the bedroom (a picture today in the Van Gogh Museum) there after spending two days confined to his bed by a fit of exhaustion.

The artist’s specific interest here in the decoration of his home betrayed nervous excitement in anticipation of Gauguin’s arrival the following week. Already Van Gogh’s friend, competitor and artistic idol, Gauguin was to be his collaborator at last, to live and work by his side in the Yellow House.

The dream of a shared Studio of the South, however, proved short-lived, descending before the year was out into a nightmare, when Van Gogh experienced a nervous breakdown in late December and presented a severed portion of his own ear to a local prostitute. In and out of the hospital at Arles through the spring of 1889, Van Gogh admitted himself to the asylum of Saint-Paul de Mausole at Saint-Rémy-de-Provence in early May. It was there, the following September, that he undertook the second and third versions of his Bedroom, today in the Art Institute of Chicago and the Musée d’Orsay, respectively. Both were adapted from the original canvas, which had sustained serious water damage in a flood at Arles.

As he copied the damaged Bedroom in his asylum studio at Saint-Rémy, the hopeful moment that picture had once captured must have seemed very far away. Yet the second version—the Chicago picture—is, if anything, more startlingly vivid than its predecessor, its colors more vigorously contrasted, its surface more thickly covered in paint. Hoped for, lost and longingly remembered, the peaceful scene here rematerializes with the intensity of a fever dream.