10 Trips to Take Before Your Kid Turns 10
Sponsor

Cross these attractions off your family’s bucket list before your child outgrows them. Your young ones will remember these trips forever.

A couple of months before my daughter, Katie, turned 9, we hopped in the car for a day trip to Idlewild, a beautiful park in western Pennsylvania with a storybook theme. After about an hour of halfheartedly meandering around the Three Bears’ house and exploring Jack & Jill’s hill, Katie told me, “This would have been cute when I was younger!” She really was too old to be interested in (let alone excited by) most of the activities. I had missed the boat. Don’t do the same. Visit as many of these places as you can while they’re still captivating for your child.

In its large, colorful art studio with lots of natural light, kids create the most amazing projects. They might be tissue-paper collages (like the ones that grace the pages of Carle’s works), layered paper drawings, or a craft that relates to a special event or temporary exhibition (Madeline at 75 will run from November 15 to February 22). “My 6-year-old son, Jack, loved making the collages, and he’s not typically interested in crafts,” says Cindy Leahy, a mom of two in Marshfield,Massachusetts. “Our 2-year-old, Kate, played in the space’s toddler area with artsy magnets and blocks.” The museum also has a library with thousands of picture books; stop by there for staff-led storytime. Outside the library, don’t miss an Instagram-worthy photo op: a giant, two-sided Very Hungry Caterpillar reading cubby. Take a scavenger hunt through galleries featuring Carle’s original artwork plus some from other picture-book creators. ($9 for adults, $6 for kids 1 to 18, $22.50 for two adults and two kids; carlemuseum.org)

Like a cool children’s museum, these centers, located in Atlanta; Schaumburg, Illinois; Grapevine, Texas; Kansas City, Missouri; Yonkers, New York; and Somerville, Massachusetts, woo little Lego fans with building contests, short 4-D movies, soft play areas, and building workshops. Some locations also include a Lego Friends area, a Duplo section for toddlers, and a Star Wars exhibit. “My 4-year-old can’t get enough of the laser ride where he can zap villains in a dragon car,” says Cheryl Eugenio, founder of the Chicago-based O… the Places We Go blog. Although tweens are into Legos, they may find the centers babyish. Prices vary by location, but are under $25 per person; legolanddiscoverycenter.com.

For your budding acrobat, The Ringling (of circus fame) recently opened this imaginative playground that’s attached to its free Bayfront Gardens. Designed by a German manufacturer, the playground features basket-like swings, colorful Bouncing Flowers (aka mini trampolines), and a three-story, 12-foot tunnel slide that kids climb up using nets and ladders. Toddlers will like a house with a small slide and splash area with a waterfall. Free; ringling.org/playspace 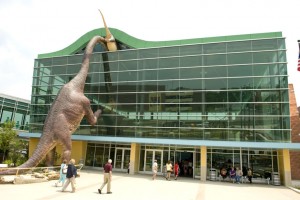 The largest children’s museum in the country — with five stories of fun — does a great job of engaging toddlers and pre-tweens in the same exhibit. “For instance, in the Dinosphere, a parent could help a 3-year-old try on a dinosaur costume while still keeping an eye on her 8-year-old who is talking to a paleontologist about a real dinosaur fossil,” says Kim Harms, director of public and media relations. But the earlier you make the trip, the better. The museum’s centerpiece is Playscape, a massive exhibit on the third level just for children 5 and under as well as their siblings. Kids can launch balls from the Reaction Contraption, see things fly through the Whirly Twirly Tower, and grab a net and explore the pond habitat. Thoughtful conveniences like hand-gel stations, family bathrooms, child-size toilets, and nursing rooms, right in the space, make the outing less stressful for you. $19.50 for adults, $14.50 for ages 2 to 17, free for younger kids; childrensmuseum.org

Next, head to Gilroy for more than garlic.

Started as a tree sanctuary, this park has become a haven for the stroller crowd. “One of my biggest regrets is that I waited until my kids were 4 and 7 to do it,: says Peter Hartlaub, pop-culture critic for the San Francisco Chronicle. “I thought it was going to be cheesy, but it was awesome.” Most of the park’s gentle rides are themed around fruits and veggies, so your kiddos can twirl in garlic bulbs, spin in strawberries, or hop on the mushroom swings. “You don’t have to worry about teenagers mowing down your kids and there’s never much of a line,” Hartlaub says. The park also made getting on the rides easier for families with strollers by eliminating turnstiles. Last summer, it opened a water area where kids might get sprayed by a flower or misted by a pop-up geyser. Check the park’s calendar before you go — in the fall, it’s generally open only on weekends. $55 for adults, $45 for kids 3 to 10, free for 0 to 2; gilroygardens.org

Inspired by the classic holiday book, railroads in more than 30 cities nationwide (including Durango, Colorado; Newport, Rhode Island; Williams, Arizona; and Miami) typically offer hour-long rides that feature a reading from the book and a visit with Santa. Many of the railroads also supply a cup of hot chocolate and cookies as well as a gift from Santa — a sleigh bell (just like in the story). Cost and times vary by railroad; check out raileventsinc.com for a list of lines.

Next, find out what to “sea” in Monterey.

While this famous aquarium about two hours south of San Francisco appeals to all ages, its incredible Splash Zone section — with crawl-through tunnels, textured walls, and low exhibit windows — caters to young kids. Among the 45 interactive exhibits, kids will find pull-out plush eels to play with next to living moray eels; touch pools with sea urchins, abalones, and other creatures; a dress-up area where they can put on a sea-horse costume next to a tank with actual sea horses, as well as games, knobs, buttons, and levers galore relating to sea life. The exhibit also offers Coral Reef Kingdom, a cornered-off padded section for kids under 34 inches. Combine with a trip to Gilroy Gardens (details on page 34) and make it a long weekend. $40 for adults, $25 for ages 3 to 12, free for younger kids; montereybayaquarium.org

The majority of the 25 attractions in this crafty kids’ paradise about 80 miles from Philadelphia are surprisingly high-tech thanks to a refresh last year. Kids can create digital works of art and project them to a bigger screen, use computers to print their crayon labels (with the name of their choice), and generate an image of themselves as a coloring page using a Photobooth. The story of how crayons are made is now partially animated, so it’s more engaging than ever. But despite the digital makeover, double-digit kids will lose interest quickly unless they’re super artsy. $16 for ages 2 to 65, younger kids are free; crayolaexperience.com

At this mountain retreat about 90 miles west of the Denver airport, kids have their own life-size snow castle to explore when they hop off the gondola at Dercum Mountain. “My 9-year-old’s jaw dropped when he saw it,” says Amy Whitley, founder of PitStopsForKids.com. “It’s elaborate, featuring tunnels, a lookout tower, ice slides, and an ice-sculpture throne. Take a picture on the throne.” The castle is part of Keystone’s Kidtopia program, which also includes Saturday afternoon parades with a mascot and cookies. Lift tickets start at $70 for ages 13 to 64, $48 for kids 5 to 12; free for younger kids, keystoneresort.com

Originally published in the November 2014 issue of Parents magazine.