What is the difference between “rude”, “mean” and “bullying”?
Sponsor 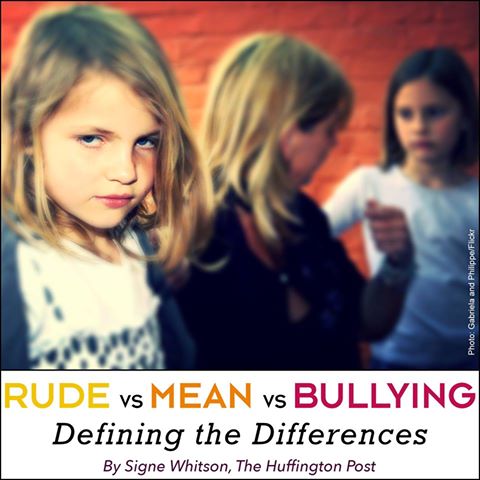 “There is a real need to draw a distinction between behavior that is rude, behavior that is mean and behavior that is characteristic of bullying,” asserts Whitson. In a HuffPost article, she clarifies the way she identifies the difference and asks adults to remember that distinguishing between them allows “teachers, school administrators, police, youth workers, parents and kids all know what to pay attention to and when to intervene.”

Whitson’s article was prompted by an encounter with a parent, who told her, “Last week, my daughter was bullied really badly after school!” and then went on to describe what Whitson characterized as a benign encounter between playful children throwing leaves. She writes, “While I always want to be careful not to minimize anyone’s experience… if kids and parents improperly classify rudeness and mean behavior as bullying — whether to simply make conversation or to bring attention to their short-term discomfort — we all run the risk of becoming so sick and tired of hearing the word that this actual life-and-death issue among young people loses its urgency as quickly as it rose to prominence.”

So how does Whitson define the differences? Rude, she says, is “[i]nadvertently saying or doing something that hurts someone else.” In children this takes the form of social errors like “burping in someone’s face, jumping ahead in line, bragging about achieving the highest grade or even throwing a crushed up pile of leaves in someone’s face.” The critical factor? “Incidents of rudeness are usually spontaneous, unplanned inconsideration, based on thoughtlessness, poor manners or narcissism, but not meant to actually hurt someone.”

Being mean involves “purposefully saying or doing something to hurt someone once (or maybe twice).” Unlike unthinking rudeness, “mean behavior very much aims to hurt or depreciate someone….Very often, mean behavior in kids is motivated by angry feelings and/or the misguided goal of propping themselves up in comparison to the person they are putting down.” And while Whitson agrees that both rudeness and mean behavior require correction, they are “different from bullying in important ways that should be understood and differentiated when it comes to intervention.”

Bullying is “intentionally aggressive behavior, repeated over time, that involves an imbalance of power….Kids who bully say or do something intentionally hurtful to others and they keep doing it, with no sense of regret or remorse — even when targets of bullying show or express their hurt or tell the aggressors to stop.” Whitson gives examples of multiple kinds of bullying, including physical and verbal aggression, relational aggression (like social exclusion, hazing, or rumor spreading), and cyberbullying. The key aspect to all of them is the ongoing nature of the behavior, which leaves the victims feeling powerless and fearful.

Whitson is pleased that, in the past few years, “Americans have collectively paid attention to the issue of bullying like never before; millions of school children have been given a voice, 49 states in the U.S. have passed anti-bullying legislation, and thousands of adults have been trained in important strategies to keep kids safe and dignified in schools and communities.” As we continue to improve our response to bullying, she asks all adults who interact with children to remember that “a child’s future may depend on a non-jaded adult’s ability to discern between rudeness at the bus stop and life-altering bullying.”

Whitson is also the author of the bullying prevention book for parents and educators, “8 Keys to End Bullying: Strategies for Parents & Schools” athttp://www.amightygirl.com/8-keys-to-end-bullying