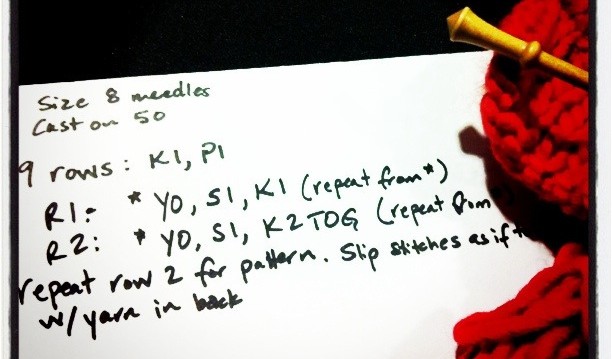 “Thinking is like cosmic knitting,” Waldorf school founder Rudolph Steiner wrote nearly one hundred years ago. Steiner  developed a comprehensive handwork curriculum for Waldorf students based on this idea, filled with knitting, sewing and woodworking, believing that “a person who is unskillful in his fingers will also be unskillful in his intellect, having less mobile ideas and thoughts.”

Today’s Waldorf students still knit socks and whittle kitchen spoons and many Waldorf schools shun the use of technology. Those two things — handwork and technology — might seem at first glance to be at odds. But there’s a case to be made that handwork and computing  — and the kind of process that links the two — are more closely related than one might think.

When electrical engineering professor Dr. Karen Shoop of Queen Mary University in London took her first knitting workshop, she noticed immediately that knitting is very similar to writing computer code. “I noticed that knitting instructions are largely binary (like computers) – in other words, knit or purl,” she said. “More interesting were the knitting instructions, which read just like regular expressions [of code], used for string matching and manipulation when coding.” Shoop also recognizes that the earliest stages of computing were inspired by handwork: “Of course, computers ultimately started off partially inspired by weaving and the Jacquard loom, or earlier Bouchon’s loom. Arguably some of the earliest programmers were the people making the card/paper punch hole patterns for weaving patterns.”

Shoop explains that regular expressions are simple but powerful for both searching and simplifying code, and are used in both knitting and codingto read patterns. In the essay “Knitters and Coders: Separated at Birth?”she writes, “In knitting notation (assuming an even number of stitches) it looks like:

Repeat these 2 rows for length desired.

“Computers do not understand the words we used in our explanation above: words like ‘row,’ ‘repeat,’ ‘rep,’ ‘to,’ ‘from,’ ‘end,’ ‘length’ and ‘desired,’ for example.” But what if the knitting pattern were written in code? Using coding’s regular expressions, the knitting notation above turns into something like:

“Students often feel anything to do with computing (especially coding) is in a separate bubble,” she said. “And I wanted to show that we ‘code’ in our outside world.” Shoop even had a student — an enthusiastic knitter — who, as a senior class project, developed a digital tool that could recognize and generate new knitting patterns.  “We’re interested in how creativity can inform technology and help create and inform new tools and technologies to support the creative process,” she said.

HOW HANDWORK CORRELATES TO LEARNING

Working with the hands can help both boys and girls develop thinking skills as well as fine motor skills, both of which are sorely needed in schools, says Michael Gurian, author of Boys and Girls Learn Differently. “For males [in general], handwork helps with fine motor skills, and for females [in general], it helps with diagrammatic thinking, found in the highest levels of geometry and physics,” he said. “School is fine motor-oriented, and we need more boys to get fine motor skills early.” Gurian would also be interested to see if handwork like knitting or woodworking would be a way to interest more girls in STEM fields, hoping that something like Shoop’s knitting project might serve as a guide for longitudinal studies finding a connection between handwork, engineering, and computer coding.

Seeing how the hand is connected to learning goes beyond skills matching or STEM, but to the roots of human biology, says Stanford neurologist Frank R. Wilson, author of The Hand: How its Use Shapes the Brain, Language and Human Culture. In a keynote address given to the department of Humanities and Human Sciences at Point Park College, “Hand-made Minds in the ‘Digital’ Age,” Wilson implored teachers to incorporate more handwork into school work.

“It seems abundantly clear to me that, because of the process of co-evolution, the hand enjoys a privileged status in the learning process,” he said. “Being not only a catalyst but an experiential focal point for the organization of the young child’s perceptual, motor, cognitive, and creative world. It seems equally clear that as the child comes to the end of the pre-adolescent stage of development, the hand readily becomes a connecting link between self and community and a powerful enabler of the growing child’s determination to acquire adult skill, responsibility, and recognition.”

Shoop isn’t sure that k-12 students can learn anything specific from knitting (“Being a devil’s advocate,” she remarked, “does it have to teach anything? Knitting as making activity could be sufficient.”),  and warns that teaching large classes of students to knit does have drawbacks — including the time to check everyone’s work. Yet she admires how the tangible, sensory experience of knitting and the seemingly intangible world of computer coding are so closely linked. “I loved the fact that there is a perception (usually wrong) that there’s a world of computers (soulless, technical, ‘geeky’) and a completely different domain such as knitting (traditional, ‘female’, craft) – yet there is a clear overlap.”