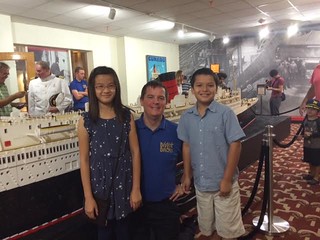 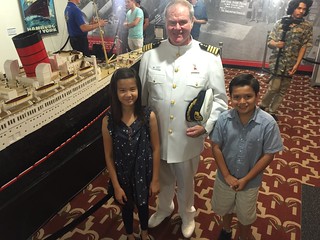 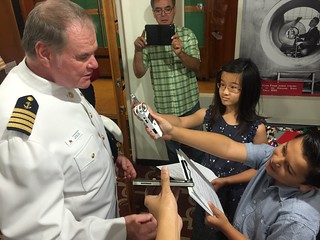 1) What is your favorite story to tell about the Queen Mary?

The Queen Mary lives today after 80 years on this earth. This is the last example of the whole golden age of ocean travel before the advent of jet planes. Now that it has been retired from the sea it’s been a hotel and attraction here in long beach longer than it has been in the see. It carries the most important people across the Atlantic Ocean. It would carry troops in pursued of freedom. It is a great example of how to make money at sea.

2) What is your favorite tour of the Queen Mary?

It is the glory days because it has been historical contents. It starts at the time that the Queen Mary has started sailing at 1936 before the building of Queen Mary at 1930. It tells the story of how the famous people travel in the ship in 1930s like President Kennedy at the age of 25 or 26. All of the old time movie stars travel in the Queen Mary. The Queen Mary’s effort in the second World War. It tells in the glory days where it is the most fashionable way to cross the Atlantic Ocean between 1947 to 1967.

3) What is the most number of people on board the Queen Mary at the same time?

In July of 1943 during World War 2, at the Queen Mary pairing 16683 people across the north Atlantic at one time. That is the greatest number of people carry in the ship in the entire history of the sea.

4) Who are some famous people who have been on the Queen Mary? 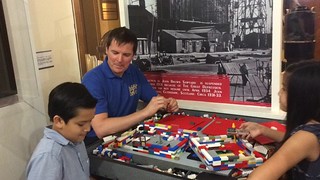 1) Can you tell us a little about Bright Bricks?

It is a company that I rode with my business partner. What we do is we build things out of lego. People over the world pay us to make legos. We are professional lego artist.

2) How many pieces did it take to build the model of the Queen Mary?

It is about 250,000 pieces. We didn’t count each pieces but we weight it and get the approximate of how many piece it was made.

3) How long did it take to build the Queen Mary model?

4) How many people did it take to build the Queen Mary model?

Originally two people but at the end since we run out of time, we have five people to make sure it gets finished.

5) Why did you make the LEGO model of Queen Mary ship?

Because I love making things out of lego. We actually have a big show related to ships in England. 15 years ago I was in queen mary, so I decide to make a queen mary out of the legos.

6) How long did it take for you to make the display?

4 months go get it done. To make the display, it takes about 40 hours as it gets transported in section. 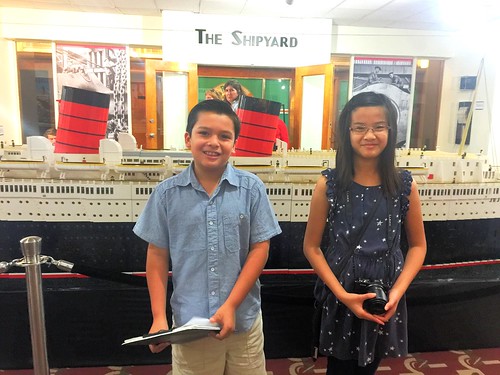 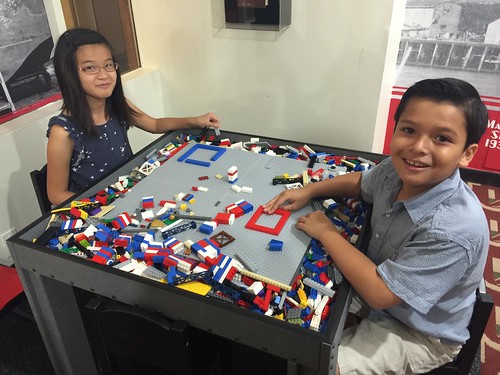 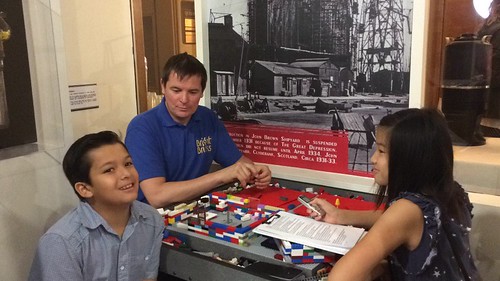 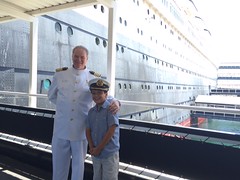 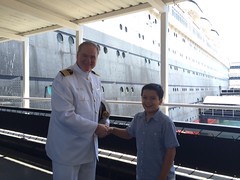 Today was the day I have been looking forward to. I was going to meet Ed Diment from Bright Bricks, a Certified Lego builder from England. They are professional Lego builders and they built big Lego projects for companies around the world. They build a really, really big and cool Lego model of the Queen Mary. The Lego model of the Queen Mary will be open for the public to see on board the ship. Also, I was going to get to meet Commodore Everette and interview him too. He is known as, “The heart of the Queen Mary.” I read and watched some videos about Commodore Everette, the Queen Mary, Ed Diment, and Bright Bricks online before the interview. I was not as nervous this time, but a little bit nervous and super excited. My parents took me to the Queen Mary for the first time last month. I wanted to go back to see the other parts of the ship. I wanted to stay longer the first time and it seemed too short again this time.

So today, I met with Janice from Lajajakids.com and Jessica, the other Jr. Journalist to do the interview.  We got to see real life Lego model of the Queen Mary. That was the biggest toy ship I have ever seen. Jessica and I interviewed Ed Diment from Bright Bricks first. He was super fast building with Legos. Mr. Ed said there are about 250,000 Lego bricks used to build the model. I have never met such a fast Lego builder in my life. He was super nice and even showed Jessica and I how to build a sheep and a Lego city. It was like magic how he built things so fast. I had a lot of fun building with him. He was the coolest builder and a very friendly person.

Then we got to interview Commodore Everette of the Queen Mary.  Commodore Everette was very very nice. He has worked on the Queen Mary for about 33 years and has met many people on the ship.  He said there are famous people like President Kennedy, Winston Churchill, Queen Elizabeth’s mother queen, Clark Gable and so many other famous people who has travelled the Queen Mary. He also likes the Glory Days tour the most. I also learned that there were 16,683 people on the ship at one time before to travel across the North Atlantic. The ship is super big and twice the size of the Titanic. I think that is super super big. He really loves the Queen Mary and was so kind to share his stories with us.  He even gave us a private tour.  I got to see the biggest room on the Queen Mary, the shopping area, the restaurant, the kids play area, and we even got to see a haunted room in the Queen Mary which was the swimming pool. I loved all his stories and wanted him to tell us more. I also really liked his uniform. My favorite part was when I got to wear Commodore Everett’s hat for a picture. It was so cool!

Thank you so much to Lajajakids.com, Ed Diment from Bright Bricks, and Commodore Everette from the Queen Mary for an awesome day! I will remember this day for life.  Thank you also to Janice and Jessica. I had a fun fun day.

When I entered the lobby, I saw a cool picture of the Queen Mary. In the shipyard, I saw the Lego display of Queen Mary that was made by Bright Bricks, which is a Lego company in England. They also had little tables of Lego to play with The Lego of Queen Mary was so awesome and cool. It was a creative and amazing project. 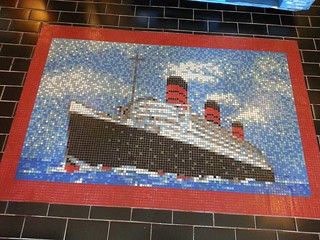 Aaron and I interviewed Ed Diment and Everette Hoard, which is the captain of Queen Mary. Bright Bricks is a company that Ed created with a partner in Britain. They made it because Queen Mary was the greatest ocean liner. It took about 250,000 Lego pieces to make the Queen Mary. It took around 4 months because there were people helping to make the Lego Queen Mary ship finished. To make the Lego ship, it required 4 professional Lego builders. 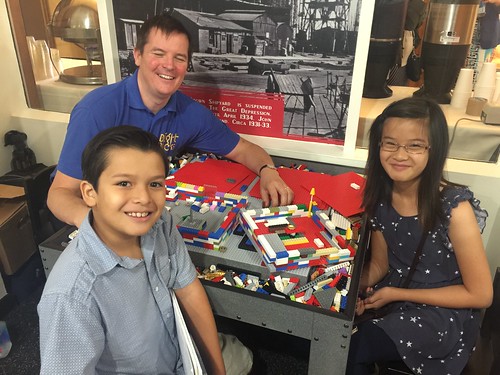 When Britain’s most famous ocean liner was still a dream, the Cunard Lines recruited the John Brown shipyard in Scotland to build what would become the world’s most famous ocean liner. When Britain’s certified LEGO builders, Bright Bricks Inc. decided to commemorate the ship in LEGO Bricks – they never dreamed the huge model would someday come to Long Beach and be displayed on the actual Queen Mary. 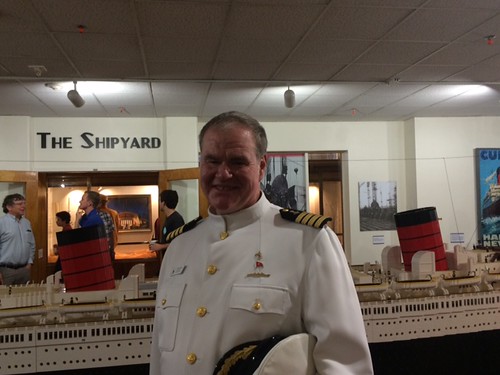 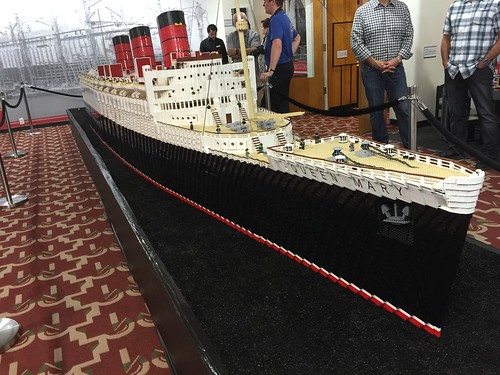 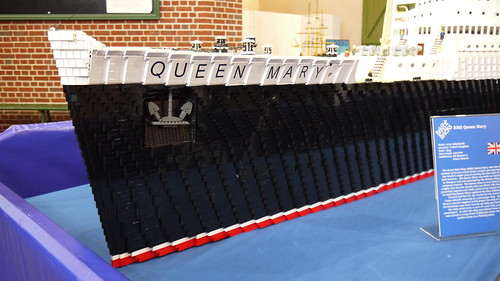 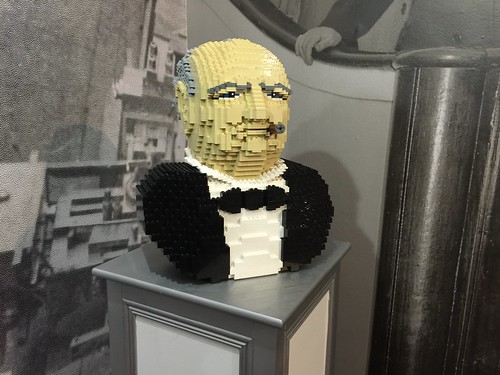 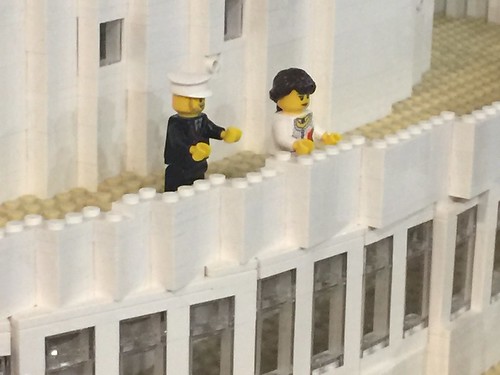 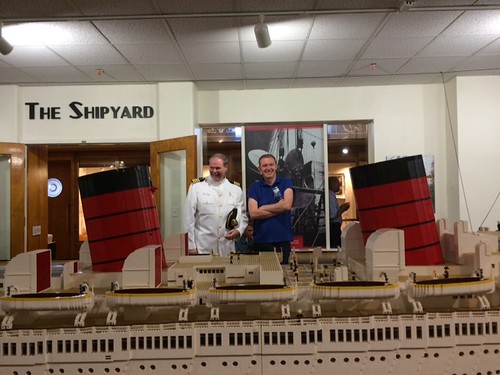