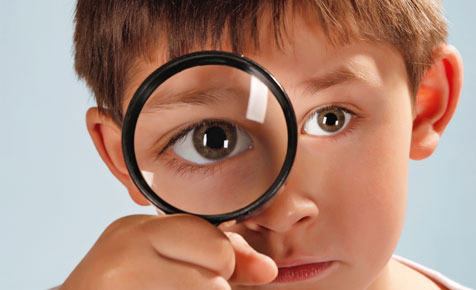 Younger kids typically love to draw and aren’t too worried about the outcomes of their artwork — until they get older. By the time they’ve learned to read and write, art takes a back burner to academics, primarily because of what most schools prioritize. Over time it becomes harder for kids to think in pictures the way they once did. But what if students were encouraged to think in pictures alongside words?

“There’s something about writing that is a link to your brain,” saidMarissa Moss, author of the popular children’s book series Amelia’s Notebook. In the books, Moss takes on the persona of a little girl expressing her ideas about the world and people around her. The books are a combination of words and drawings and look free form – as though Amelia sketched them herself.

Taking a cue from Moss, teachers from Oak Knoll Elementary School in Menlo Park, Calif., decided to have their students keep notebooks in a similar style. The notebooks aren’t graded; rather, they’re a place of private, free expression. Karen Clancy and Andrea Boatright presented the project at the Innovative Learning Conference hosted by the Nueva School recently.

“They’re not used to being given permission to write about whatever they want,” Clancy said. But once her students realized that they really weren’t being graded and that they had freedom of expression, they eventually came to demand time to write.

Moss says writing without fear of consequences is key to developing a writer’s voice. “If you’re perfect you are guaranteed to not write a thing,” Moss said. “It’s like driving with one foot on the gas and one foot on the break.” She has developed some guides to help teachers coax students into using art and writing in their journals at the same time, as a way of flexing their visual thinking along with literacy.

She thinks it’s important for students to have a space to express themselves without specific writing assignments or limitations. They write and draw what matters in their own lives and in the process develop their voice, humor, and point of view. They get to play with language and break out of cookie cutter forms of writing like the persuasive essay.

At Oak Knoll, the students love what they call their Lifebook Journals, writing in them daily in addition to other, more formal writing assigned and graded by the teacher. “This will affect their ability to do all the other things they need to know,” said Andrea Boatright, another teacher at Oak Knoll who uses Lifebooks.

“You have no power when you are a kid, but when you are telling stories you have incredible power,” Moss said. “Kids get that.” And when they have the space to write and draw some realize they like to write, and by extension read, more than they thought. “It’s so easy to quash people and then they never want to write again,” Moss said.

While her students love their journals now, Boatright admits it was a little hard to get even young students to believe they wouldn’t be graded on their writing. So at first, Boatright gave her students “beginner Lifebooks,” just pieces of paper stapled together with construction paper covers. She discussed with the class how to write and draw out their thoughts. She even modeled what the Lifebook could look like. When students were writing in the Lifebooks, so was she. It took her students about a month to settle into the project.

Once the students were more comfortable with the idea of free expression, Boatright asked students to pick one thing they’d written and share it with the class, one what she called a “museum day.” After sharing, students were allowed to graduate to a permanent Lifebook — a composition notebook personalized by the owner.

Now, the students write four to five times a week for 45 minutes at a time. Boatright helps prompt kids that get stuck and some kids choose to do comic strips at first, easing into heavier writing later. Other students have worked collaboratively on Lifebook stories.

Boatright says her students’ word choice, voice and sentence fluency improved dramatically after starting the Lifebook project. She compared a class that used Lifebooks with another class in the school that otherwise used the same curriculum, but didn’t incorporate Lifebooks. She found that students who kept Lifebooks had an increased motivation to write, something parents noticed as well.

“Writing and reading go together,” Moss pointed out. “If you write well, you’ll be more excited about reading.” Often English class focuses on formal skills and formalized assessments. But those assignments often don’t allow students to develop a distinct voice, one of the hardest things to teach, she said.