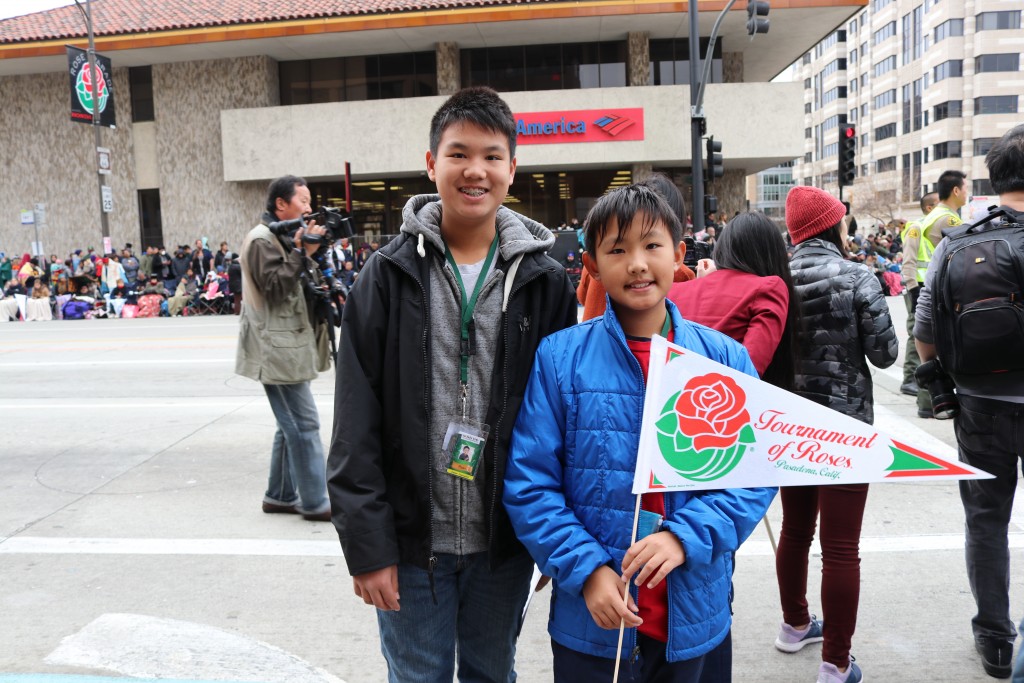 On January 2, 2018, Kyran and I went to Pasadena, California to the Rose Parade for the very first time. This year’s theme was “Echoes of Success.” The theme celebrates organizations that helped make other people successful.  This is the 128th annual Rose Parade, however, this one is special. According to tradition, the Rose Parade is never to be held on Sunday. This year, January 1st fell on a Sunday; therefore, the parade took place on January 2nd.  The parade was led by the Grand Marshals, former Olympians Janet Evans, Allyson Felix, and Greg Louganis. There were 40 magnificent floats, splendid equestrian units, and 19 tuneful marching bands taking place in the parade. The parade was 5.5 miles down Colorado Boulevard and lasted about three hours. There were decorative police motorcycles doing a show for us. That was really marvelous.

All the floats were colorful and impressive, one of my favorite was the Dole, Spirt of Hawaii. The bright and the vivid flowers reminded me of being in Hawaii. Another float I liked was the China Airlines, Return To the Beauty of Taiwan. The float was about endangered species of plants and animals. The float and the theme highlight their nation’s accomplishments, such as protecting the environment and preserving the rare species left in the island nation. Taiwan is a country that I always want to visit again. The next float I liked was the Lucy Pet Gnarly’s Crankin’ K-9 WaveMaker! It was the largest float this year. It was 125 feet long, weighed 70 tons and, was the longest and heaviest float in the Rose Parade history. Also, there were eight dogs surfing. In particular, The BDK Singpoli’s float caught my attention the most. I just saw the movie last week. The float is called the “The Monkey King: Journey to Success". The float won the parade’s “Fantasy" trophy. The focus of the float was being creative, hard working, and achieving goals you want. The Monkey king is a mythical figure from a body of legend. The monkey on the float had been made to look animated. The monkey king was 30 feet with two structures holding it up. The monkey’s staff shoot fire and had waterfalls surrounding it. It was incredible! 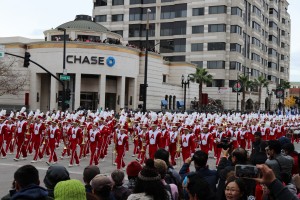 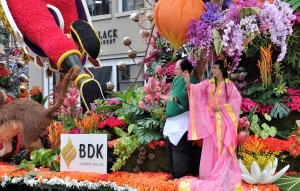 A marching band I really thrilled to see was the Arcadia Apache High School Band. There are 375 members of the band. They performed at this year’s Rose Parade for their 16th time in the past 50 years. When I hear them play, it was mind-blowing. The band director is Mr. Sherrill. He is also my percussion teacher at Foothills Middle School.

The weather was pretty decent for the parade-chilly, but at least the rain held off until the end of parade, how lucky we were! I really enjoyed the parade. I’ll definitely be back for the 2018 Rose Parade! 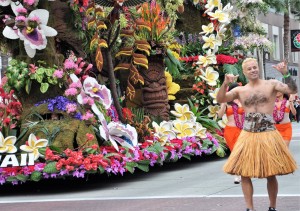 Happy New Years! On January 2, 2017, Ryan and I went to the Rose Parade to do a live introduction for La JaJa Kids. It was my first time going to the Rose Parade. I felt nervous and excited at the same time. The 2017 Rose Parade theme is “Echoes of Success”. What’s so special about this year’s Rose Parade is that it happened on the January 2nd because the Rose parade has had a “Never on Sunday” tradition since 1893. When we arrived, we went to go find our seats and that’s about when the Rose Parade started. The parade marched about 5 miles down Colorado Boulevard. When the parade started there were about 8 police motorcycles do a curving pattern to clear the path.  It was so cool! 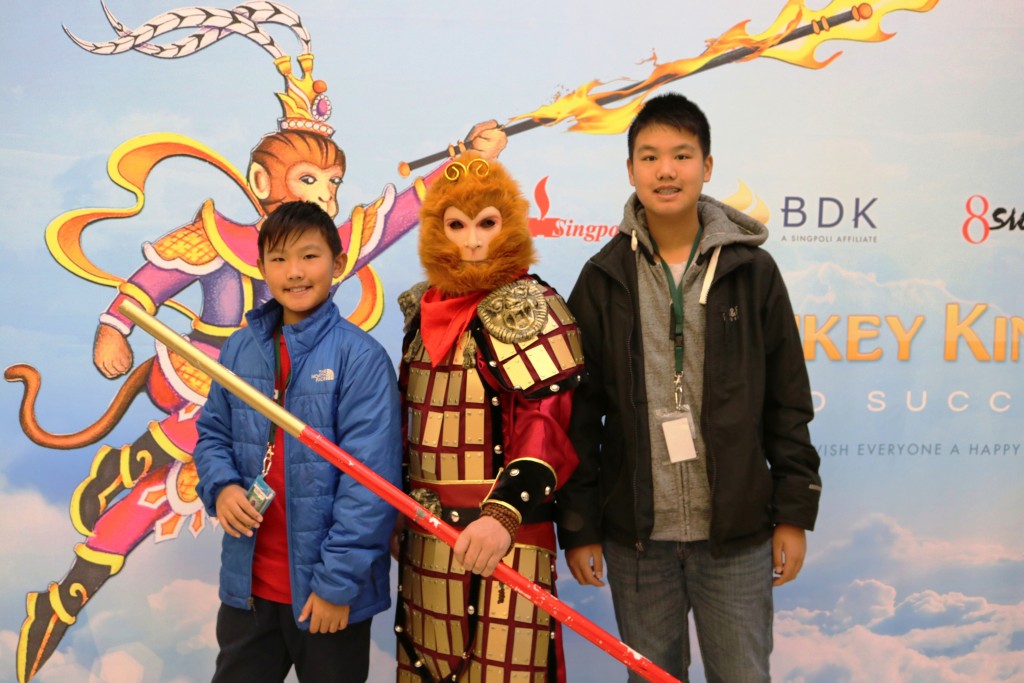 Two of my favorites floats were the Trader Joe’s float," All Aboard! 50 Years of Serving the Best…” and The BDK Singpoil’s float, “The Monkey King: Journey to Success”  because they were colorful and creative. The Trader Joe’s float uses all kinds of food, like a strawberry propeller and lemon wheels. It reminded me of when I went shopping with my mom at Trader Joe’s.  The first car is a time machine, the second one is a guest of honor table and the last one is a trusty compass so they won’t get lost. The compass is actually an ATV covered in flowers. 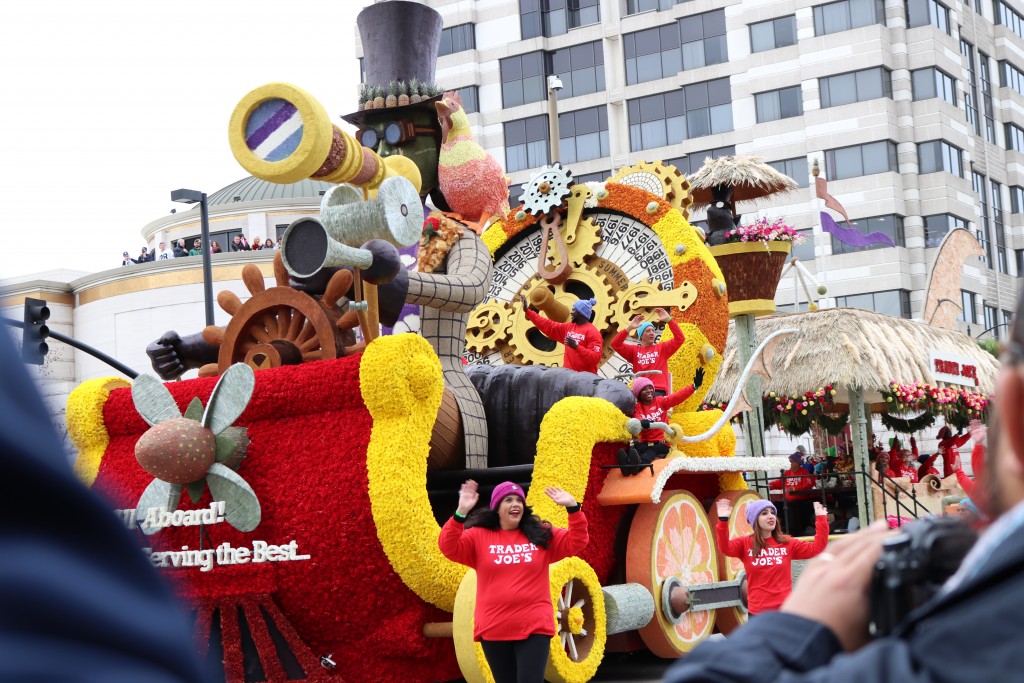 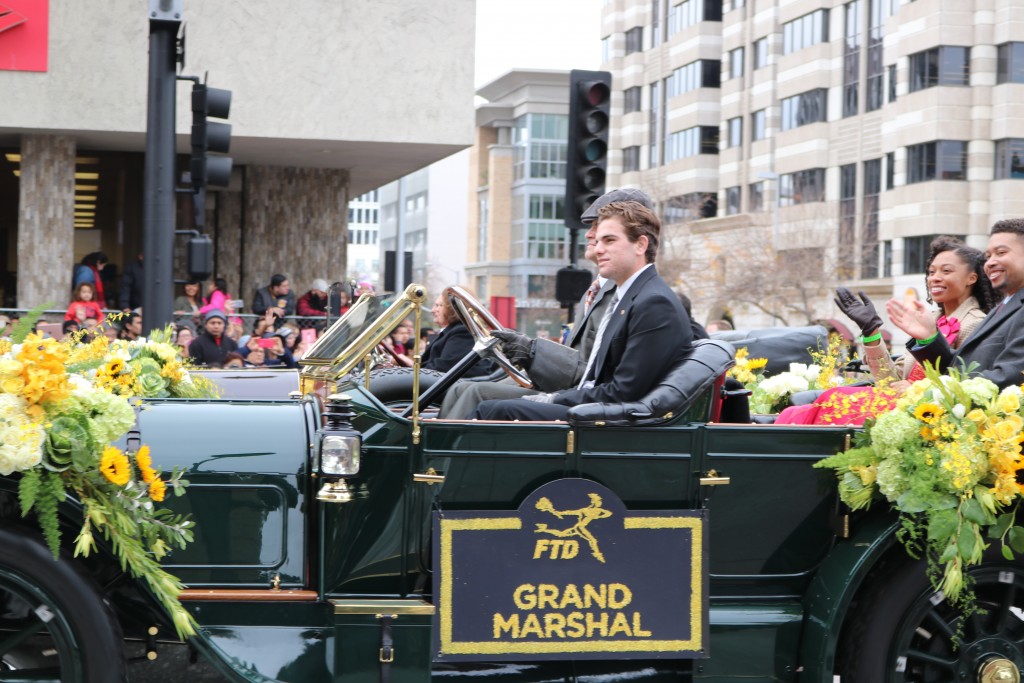 The BDK Singpoil’s theme is “Journey to Success”. The Monkey King is a famous Chinese classic novel and his real name that the Jade Emperor gave his is Sun Wukong. He was born from a rock. He first misbehaved a lot but he turned out to be good. The monkey king movie and book were both really fantastic.  It was one of my favorites Chinese novel. 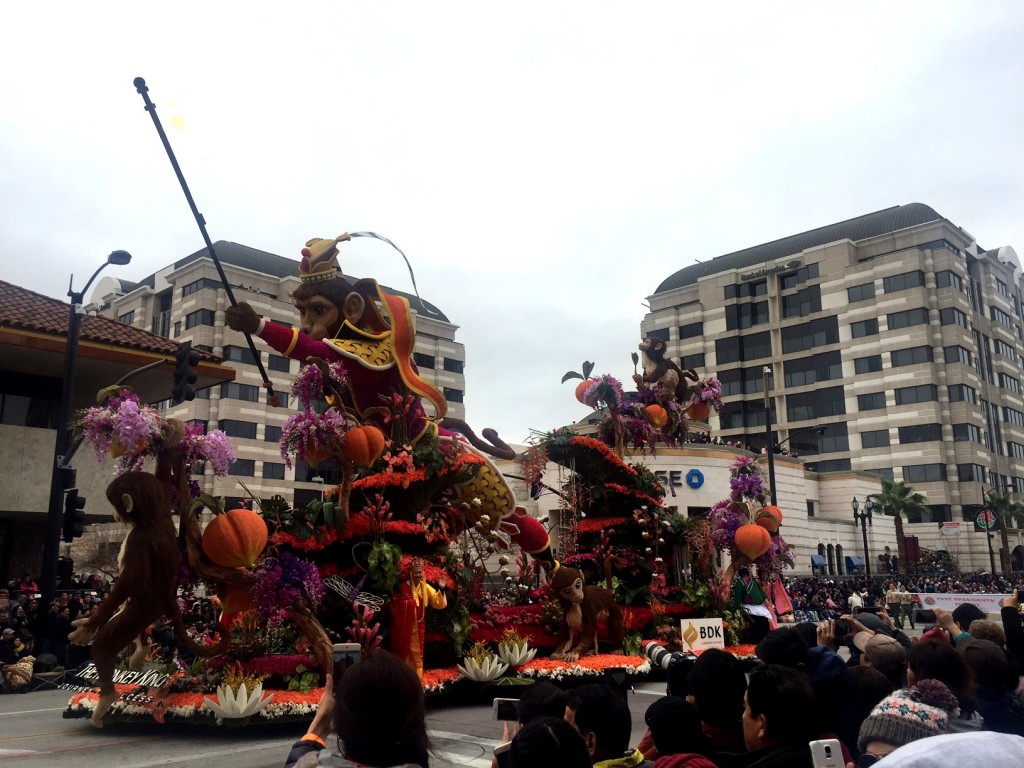 I also had a favorite band from Japan, called the Gifusho Green Band. Their cheerful songs had me in a good mood at the Parade. They had to travel 8,884 km to come here and try really hard to accomplish their dreams. Their costumes were gorgeous! I was surprised at how many people they have in the band! 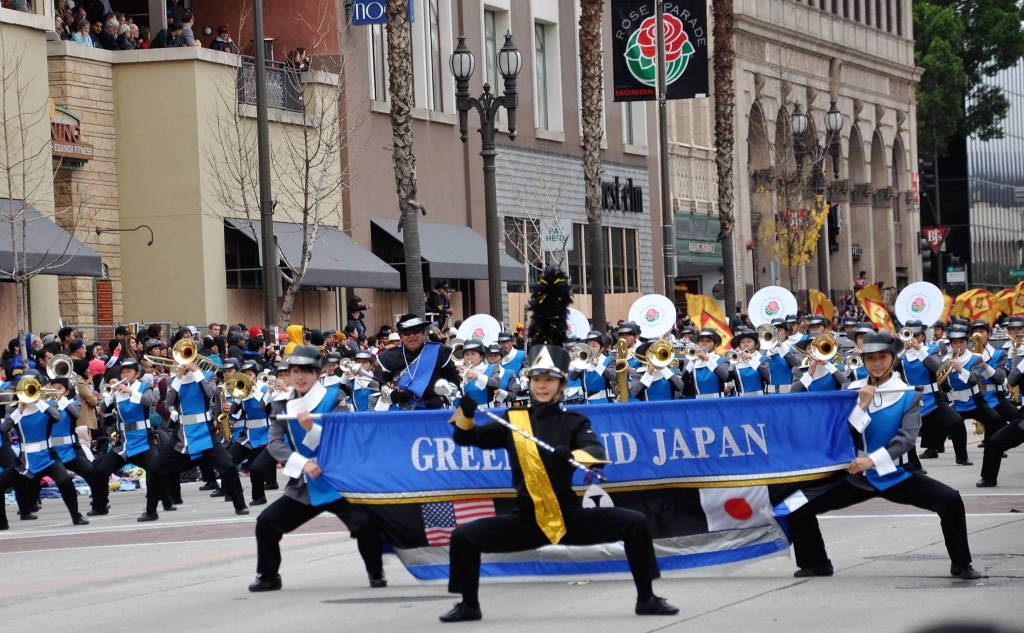 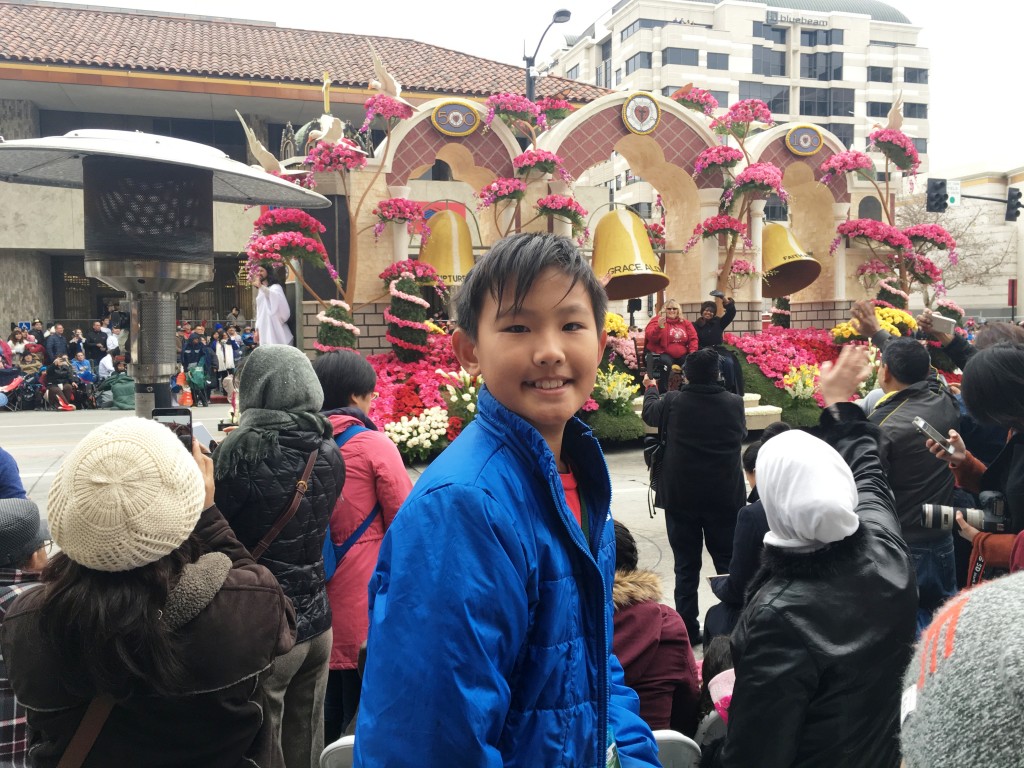