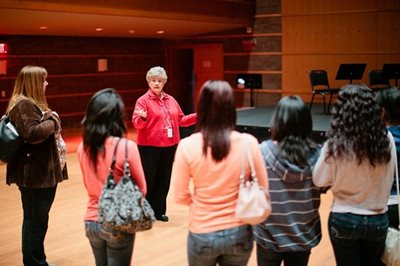 Segerstrom Center offers tours of Southern California’s award-winning home for the performing arts and its expanded facilities. The tours take visitors through the three venues, making this a perfect outing for groups or anyone who wants to know more about the performing arts. The tour is conducted by Center Docents.

Segerstrom Center for the Arts is unique as both an acclaimed arts institution and as a multidisciplinary cultural campus. It is committed to supporting artistic excellence on all of its stages, offering unsurpassed experiences, and engaging the entire community in new and exciting ways through the unique power of live performance and a diverse array of inspiring programs.

Previously called the Orange County Performing Arts Center, Segerstrom Center traces its roots back to the late 1960s when a dedicated group of community leaders decided Orange County should have its own world-class performing arts venue.