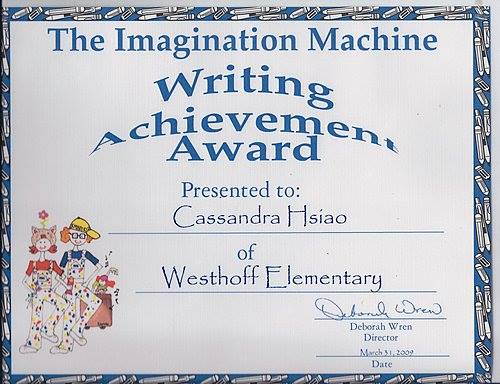 Cassandra Hsiao 小學四年級創作的小品喜劇 Couch Potato 原創文章
“Patrick, the floor is such a mess! It’s splattered with the Oreos, the chips, and spilled Coke all over the couch! And you’ve been watching TV all day long! One of these days you’re going to turn into a couch potato!” Mrs. Hope was standing over Patrick, who was sitting on the couch, stuffing as many crackers into his mouth while his eyes glued to the screen. His round tummy stood out from the couch.
“Your mother is right, Patrick.” Mr. Hope said. “I think you’d better get some exercise outside this instance.”
Patrick groaned. With the remote control still in his hands, he went outside and barely walked around the backyard. After making sure that his parents had gone upstairs, Patrick snuck into the pantry room, grabbed all the junk food and plopped down on the couch. Soon, he felt thirsty. He tried to get up to get soda, but he found that he was stuck to the couch!
“Mom! Could you help me up here?” called Patrick. His voice sounded muffled.
When Mrs. Hope came into the room, she screamed.
“Oh! My !A huge potato has sprouted from the couch!” exclaimed Mrs. Hope. “What potato?” bellowed Patrick, glancing at his body. It had turned into a potato! He tried to move his body, but found he couldn’t budge!
“It’s me, Patrick! I’m stuck to the couch! Help Me, Mom !”
“Now, don’t be frightened, I’m going to get help!” Mrs. Hope shouted. Not long later, someone was with her.
“Don’t be looking so worried now. Saving lives is my job!” Fire Chief O’Sullivan patted Mrs. Hope on the shoulder and attended to Patrick.
“Oh, he’s stuck to the couch like bees stick to honey. Not even an army could lift him!” Fire Chief sighed with sweats dripping down his face. “It’s time you call the doctor.” Mrs. Hope made a quick phone call.
Then she was running back into the room, and somebody was shuffling heavily behind her.
“Now, let me have a look at the boy.” said Doctor Meyer. A few moments passed. “I can do nothing about it, but it’s up to you to save yourself.”
“What da’ya mean?” asked Patrick.
“The only solution is…” Doctor Meyer paused. “…eating healthy foods.” Instinctively, Patrick was about to yell “NO!” But words flashed across his mind, “it’s up to you to save yourself.” So Patrick nodded his head.
So from that day on, Patrick ate nutritious high-fiber breakfasts, lunches and dinners such as subway sandwiches. He avoided fatty foods such as chips, ice cream, soda, cookies, and many other high-sugar, high-cholesterol snacks.
After a week, he could get off the couch, but he was still a potato. “Now all you need is exercise!” exclaimed Doctor Meyer. Since then, Patrick jogged and jump-rope around the backyard.
Two weeks passed. His potato fat had worn off. Patrick had managed to get back to his ideal weight.
“Hooray!” Everybody yelled.
Mrs. Hope asked her son sarcastically, “Do you want to keep your junk food?”

Patrick replied, “Nope! No more TV and junk food for me! I promise to eat healthy food and exercise every day. Tell Dad we’re going camping this weekend!”