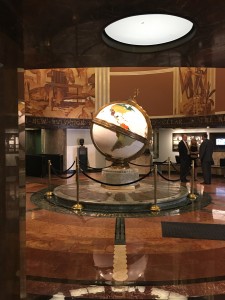 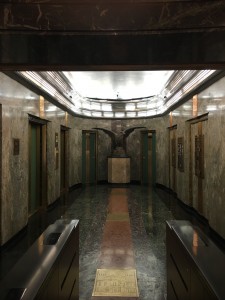 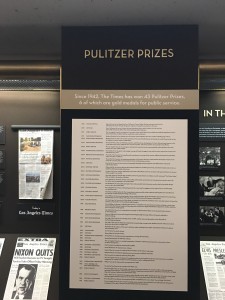 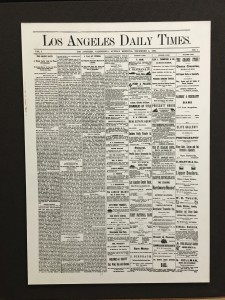 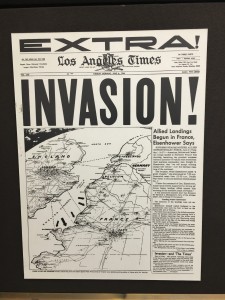 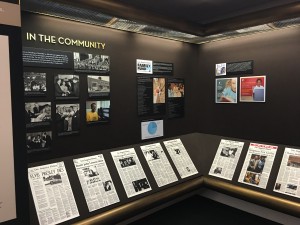 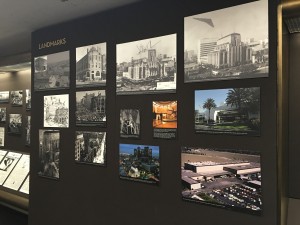 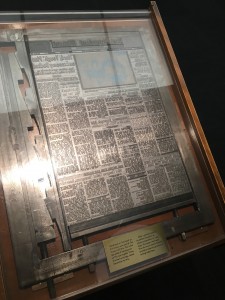 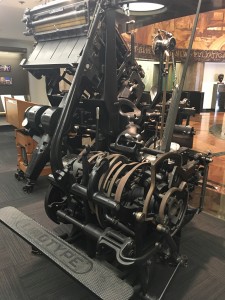 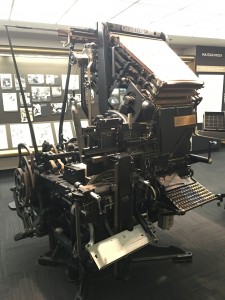 My tour to the L A TIMES

Inside the Main Lobby of the LA Times, there is a Giant Globe of the world in the middle that is why that lobby is called the “Globe Lobby”.  Also, did you know that the LA Times won the Pulitzer Prize 43 times?  Even 1 is a HUGE Honor for a newspaper.

Me, and 2 other junior journalists, Isabel and Evelyn, meet together in the Globe Lobby. We meet our tour guide, Darrell and the rest of our tour group to learn about the LA Times. In the 1881 Newspapers, there weren’t any headlines. LA Times began in 1881, so they were just beginning. LA used to be very small with only dirt roads! All business’, shops, industries, hotels, churches, and everything else was recorded back then. General Otis,(Who,yes, was a real General), was the Times 1st Publisher. He also fought in the Civil War. Harry Chandler was the 2nd Publisher of the Times. He was very important for the Times. The current editor and publisher is Davan Majarajah.

A Linotype Machine makes lines of type, like a stamp. They would stamp the paper and that’s how they did it a long time ago.

Sadly, the Times has lost 4 reporters in the process:

Some news that the LA Times published are happy and some are sad. Like the Food vs. Some Current Events like a war.

For example, some bad news, the LA Times reported that the King/Drew Medical Center killed patients instead of healing them. The Center was closed for 8 years by the Times and now has re-opened. Let’s hope they can rebuild their reputation!

LA Times has a certain code for words allowed in articles. For example, The LA Times cannot say Hispanic in any articles. Only Latino. Also, every single desk in the Times will have a Webster’s Dictionary on it.

You may know that the Times is famous for their photos, but do you want to dig in to learn more about their photographic legacy? Some really great photographers are:

Carolyn Cole took pictures of Hurricane Katrina. Don Bartletti climbed on a train to take pictures of a 9-year old kid who traveled on top of a train from South America to America alone to find his mom who worked in America only to find she didn’t want him to come.  Rick Loonis takes a lot of war photos. Mel Meleon took a photo of a dog on it’s owner’s back! Mark Boster took photos of Yosemite at 10pm with a “moon-bow”. Allen Schaben took photos of the El Nino Storm. Wally Skalij took pictures of Kobe Bryant in his last season. Allen J. Schaben took a beautiful photo of of Taylor Swift.

There are also more cheerful topics such as fashion, travel, food, comics, and more. For example, on Saturday’s they have a lot of fun topics! Including love stories called “LA Affairs” Pretty crazy huh? You can send in your “love” story for it to get it published in the times. The LA Times food section is very popular. Inside the Food Department they have a test kitchen to test food for recipes in the paper, pictures, and for videos on the LA Times website as well.. Each corner looks like a different kitchen.

When editing the LA Times, editors first make a rough copy. Then they edit it on the draft. Then the edits are made into another copy, and the process starts again.

Back a long time ago, the Times made clips of the stories they would like to save, and they kept them in envelopes. Oh boy, there are a LOT of envelopes!

I loved the experience to learn about the LA Times and if you haven’t ever read the Times, I suggest it very much! (Even if it is just the comics!)

Today, we went for a tour at LA Times. Our tour guide, told us about the history of LA Times, a newspaper company. LA Times was founded in 1881 by Davan Maharaj. They’ve won 42 Pulitzer Prizes throughout their years of business.

LA Times first started when LA was still a small city. The first rose parade was on a dirt road, and there was nothing outside LA. From bakeries to churches, everything was included. The first newspaper was printed from lead stamps. Then, it was stamped onto the paper. The lead stamps were then melted and made into new stamps for the next day’s paper. Flash bulbs and films were used to take photos. Then, more advanced digital cameras which cost 19,000 and printers came in. Soon, advanced color printing was also used for newspapers.

The publisher was the top person. 4 people were lost during going to places for news reporting and photography. One was hit by an tank in world war 2. A brave photographer called Carolyn Cole went into a church to take pictures when a gunman held hostages and lots of photographers risked their lives to go to places like volcanoes. Another photographer camped out in Yosemite and waited until 10:00 pm to take a picture of a “moonbow” because it was taken at night before a drought came. The LA Times’s eagle was sculpted by the sculptor of Mount Rushmore, Gutzon Borglum. LA Times is next to the LA courthouse and city hall and has many pictures in its building. There’s a little kitchen where recipes are tested. They also have a lot of saved pictures and clips that are organized by the subject, name, and writers.

Touring the L A Times

On June 17, 2016 three junior journalists along with two apprentices went to go “read all about it” at the LA Times. The LA Times is the largest urban daily newspaper in the entire nation with numerous Pulitzer winning reporters! Pulitzer prizes are a special award for journalists, by the way. The LA Times provide citizens with news on sports, politics, entertainment, education, and of course, daily news. Millions of readers immerse themselves in reading this newspaper every week.

First, our tour guide Mr. Darrell Kunitomi showed us around the history section of the tour. We saw the front page of the first  newspaper in 1881. There were also headlines such as the death of the well known King of rock music, Elvis Presley; the death of the King of pop music, Michael Jackson; the 9/11, a terrorist group seized control of four commercial planes and crashed two into the World Trade Center in New York City, crashed one into The Pentagon in Virginia(the headquarters of the U.S. Department of Defense), and crashed one into a field in Pennsylvania; the death of John Lennon, a part of the popular British boy band, The Beatles; the tsunami in Japan in 2004 with at least 13,000 dead; the first man on the moon, astronaut Neil Armstrong; and much more.We also saw a portrait of the first publisher, General Harrison Gray Otis. In 1917, Harry Chandler took over as the next publisher of the LA Times. Today’s publisher is Timothy E. Ryan.

There was also a giant globe placed in the center of the room. The art and design of the lobby is very different, special, and unique.The paintings on the wall were painted by Hugo Ballin. We learned that the LA Times headquarters were designed by brilliant architect Gordon B. Kaufmann who also designed Hoover Dam, a dam to control flooding and irrigation, and Greystone Mansion, a popular filming spot, to name a few.

We also learned that being a journalist can be a hazardous occupation. We have learned in the past, reporters have died reporting dangerous news. Two of the reporters are Tom Treanor and Joe Alex Morris Jr.. Tom Treanor died on August 19th, 1944. He was killed in a Jeep Accident. Joe Alex Morris Jr. died covering the Iranian Revolution on February 10th, 1979. The Iranian Revolution was the overthrow of the Pahlavi dynasty, the ruling house of Iran from 1925 to 1979.

On our final stop of the tour, we went to go see some photos with stories usually behind the image. One picture we saw was of a terrible fight over an American flag with lots of blood on February 27th, 2016. The snapshot was taken by Luis Sinco. Another photo we saw was named “Enrique’s Journey.” It was about a 9 year old boy who traveled thousands of miles to find his mother. This snapshot was taken by Don Barletti. Another image was about 7 year old Dillion Chancey who had to survive four days with his family in Biloxi, Mississippi riding out Hurricane Katrina.

That was one of the most magnificent tours I’ve ever been on. I learned about how the LA Times newspaper works and explored the LA Times headquarters. This was a great tour and I hope to go again in the future, maybe as an employee. If you would like to visit LA Times. Go to their website www.latimes.com for more information. And be sure to read the Sunday Newspaper! 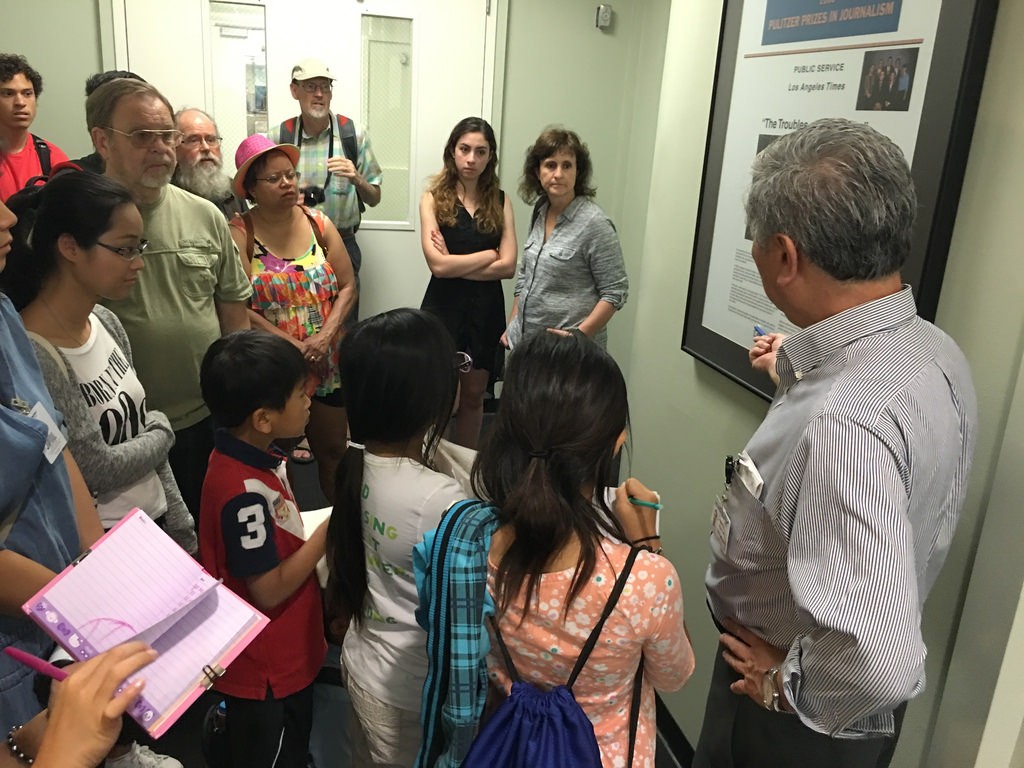 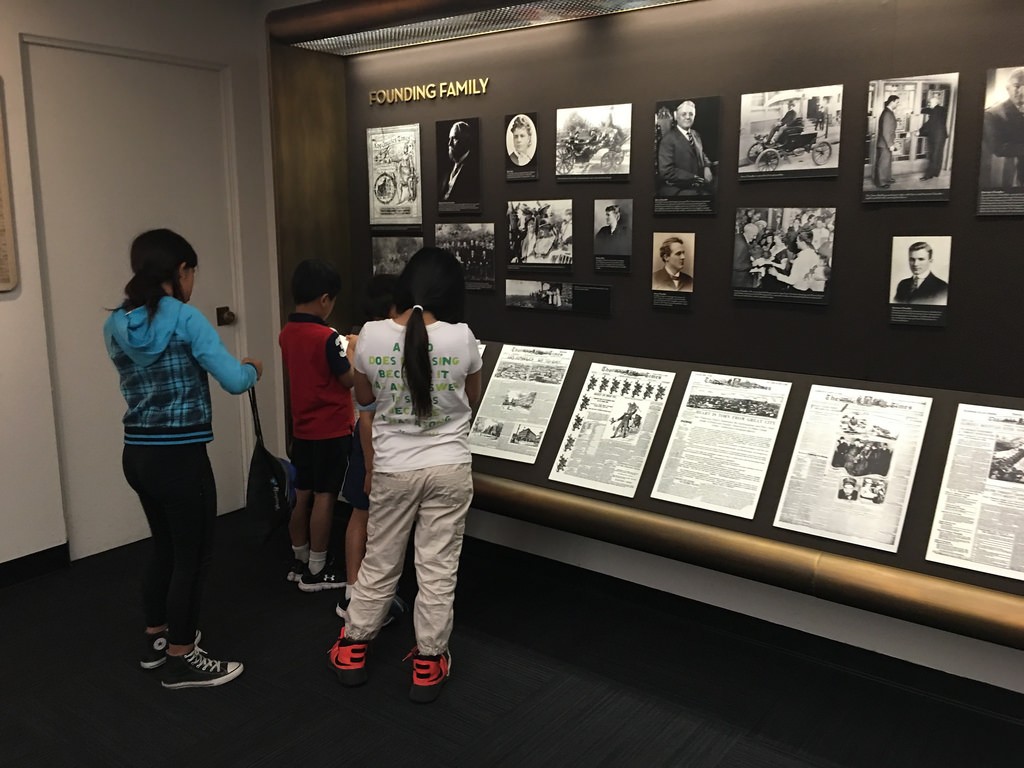 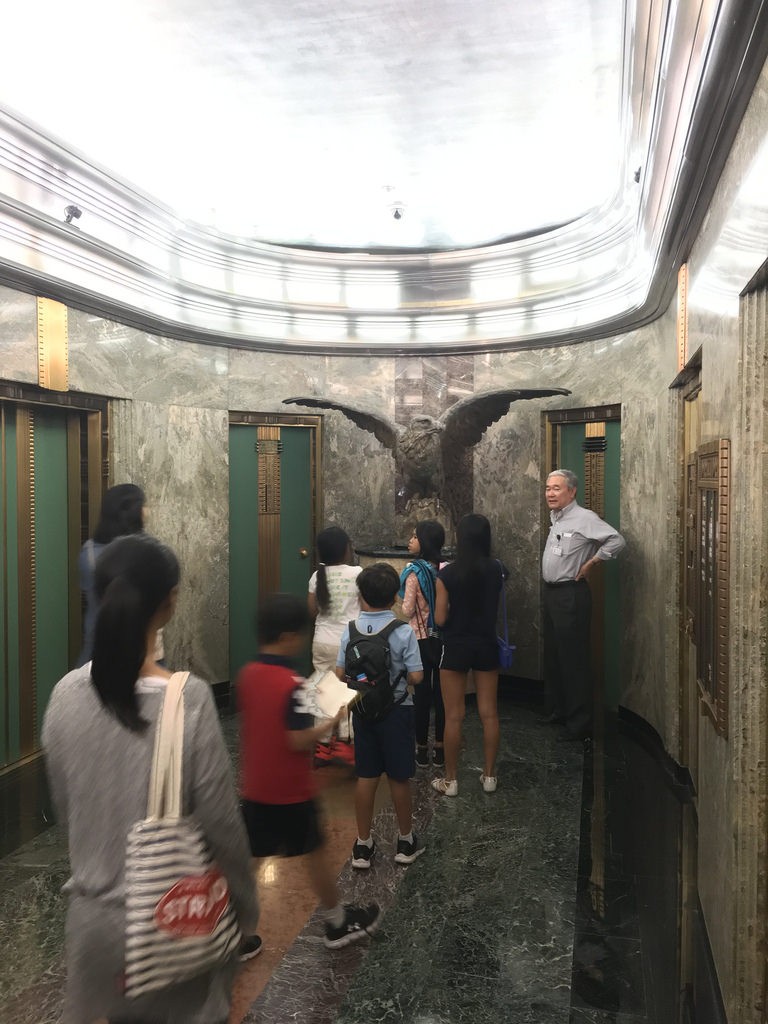 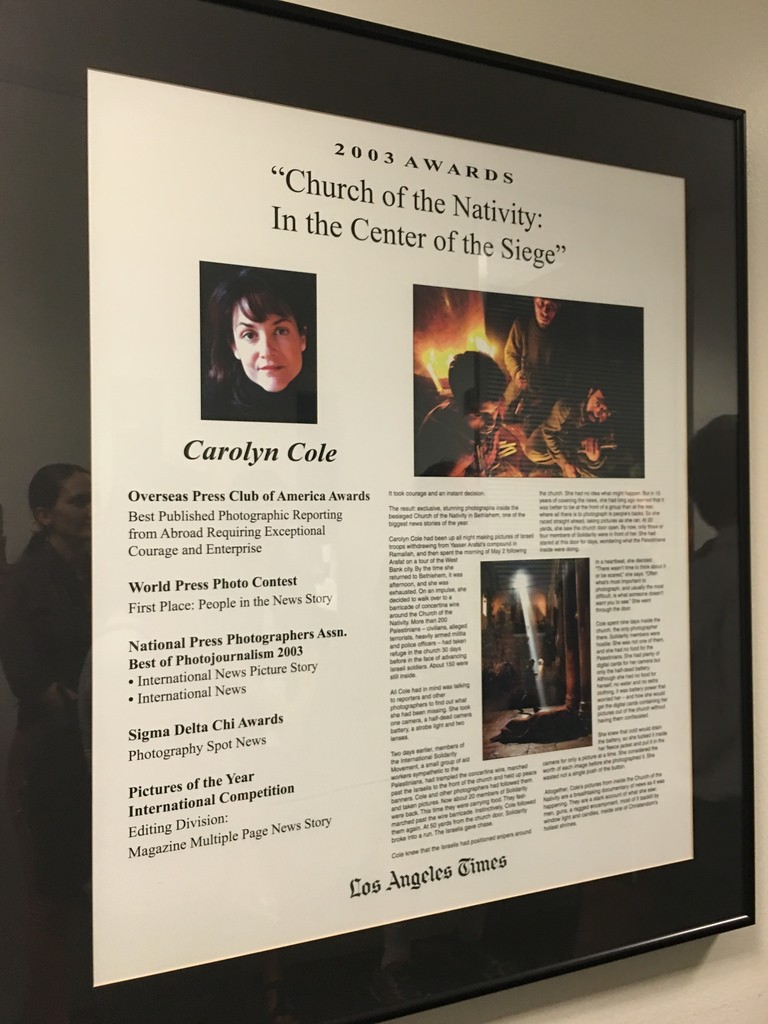 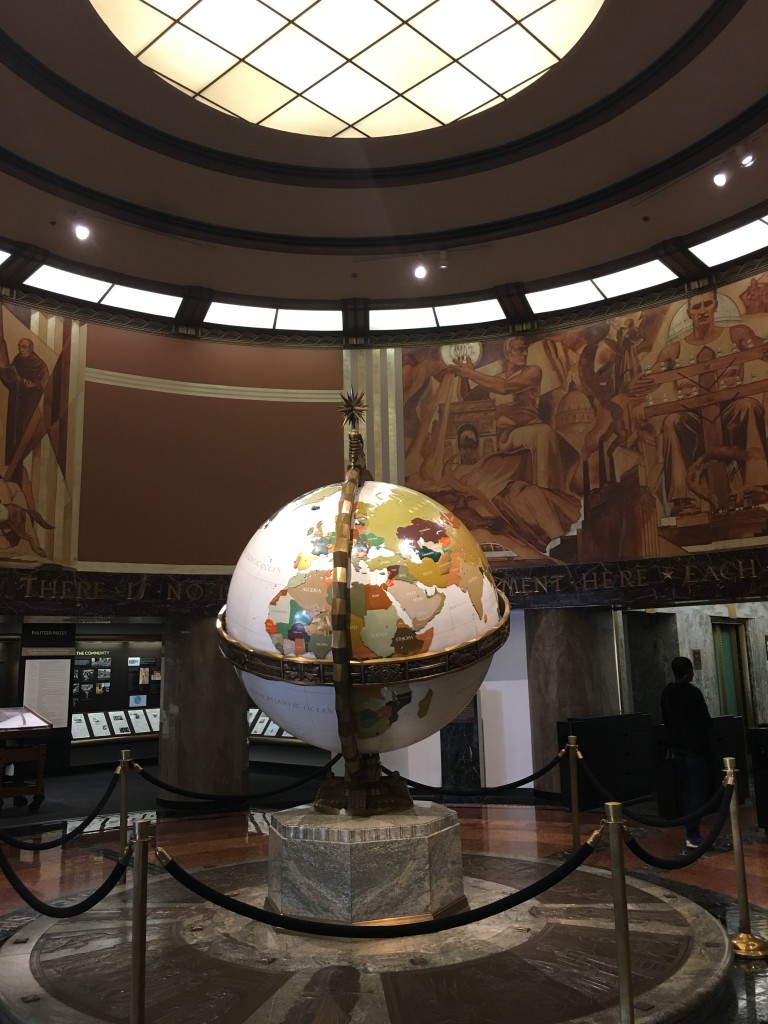