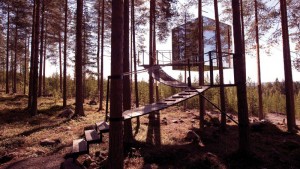 There’s something magical about a treehouse. And we’re not talking about your run-of-the-mill backyard hideaway filled with kids’ toys. These 10 examples are architectural gems that offer forest views and a cozy night’s sleep. And the best part? You can actually book them.

Issaquah, Washington
Located 30 minutes outside of Seattle, Treehouse Point features six cozy forest dwellings. The place first opened in 2006. Most of them sleep two and all include breakfast in the main lodge. Owner Pete Nelson has been building treehouses for 20 years and offers workshops to build your own. (From $255.)

Harads, Sweden
A grand architectural experiment, Sweden’s Tree Hotel offers six rooms seemingly floating in the pine trees, all with modern Swedish design: one looks like a bird’s nest, another looks like a UFO, and another is a mirrored cube. You’ll get views the Lule River valley, saunas, and a European buffet breakfast. (From $493.)

Waterbury, Vermont
Part of the Moose Meadow Lodge, a B&B in Waterbury, Vermont, the two-story treehouse opened in 2013. It’s handcrafted from local maple, cedar, pine, and hemlock, comfortably sleeps two. You can request “tree service” and a breakfast of blueberry pancakes and local maple syrup will be delivered to the tree. (From $475.)

Atlanta, Georgia
Three separate rooms are connected via rope bridges in this antique-style treehouse in a 150-year-old southern short-leaf pine tree in a lush backyard in Atlanta, Georgia. You’ll have a living room, a bedroom that sleeps two, an outdoor seating area, and access to a private bathroom in the owners’ home, also on the property. (From $350.)

Punta Uva, Costa Rica
Traverse a suspension bridge into your private, two-story hideaway, hung in the jungles of Costa Rica. The houses, which can sleep four, include a full kitchen, outdoor showers, and hand-carved wooden furniture. Located beachside in the province of Limón, you’re steps from surfing, yoga classes, and jungle treks in Cahuita National Park. (From $300.)

Vancouver Island, British Columbia
Free Spirit Spheres’ owner Tom Chudleigh built his first structure in 1993 and he’s been refining the designs ever since. He rents out three spheres on his property near Qualicum Bay on Vancouver Island. They’re made from wood and covered with a clear fiberglass skin, then hung from the trees via a supportive web of synthetic rope. “The spheres are designed to fit harmoniously into a forest setting without altering it,” says Chudleigh. (From $160.)

Manuas, Brazil
Seven treehouses—one aptly named the Tarzan House—dot the canopy in the Amazon rainforest at Brazil’s Ariaú Amazon Towers, which first opened in 1986. You won’t be roughing it: They come with queen beds, living rooms, private balconies, and bathrooms. Nearby, you can swim with dolphins, take a hike through the rainforest, or go piranha fishing. (All-inclusive three-day packages start at $825.)

Burlingame, California
You’ll have views of the bay 15 minutes from downtown San Francisco in this urban treetop oasis in Burlingame, California. Built for the owners’ children 18 years ago, the one-room cabin in a 150-year-old oak tree is now open for vacation rentals. You’ll have access to a private bathroom and kitchenette in the lower level of the owners’ main home. (From $275.)

Florence, Italy
Owned and built by an Italian designer and furniture maker, CasaBarthel is a sita above a farm teeming with olive trees outside of Florence, Italy. Made from rusted steel and recycled wood and built into a solid pine tree, it has a bedroom for two, a fireplace, a small kitchen, a bathroom, and views of the Tuscan landscape. (From $293.)

Spicewood, Texas
Four treehouses are suspended above a creekside ravine on an 88-acre ranch outside of Austin, Texas. You can sign up for a zipline canopy tour of the valley, then stay overnight amongst the Cypress trees. The largest, called The Nest, sleeps a family of four, and two additional one-room dwellings just opened in spring 2015. (From $200.)