If you also want to apply for becoming a junior journalist, click here for details

When my mom told me I will get to interview Mr. Steve as Jr. Journalist for La JaJaKids, I was feeling shy at first. But after, I was feeling excited.  All my family was excited. I knew of Mr. Steve, because when I was home sick or when my grandparents watched me, I would get to watch kid channels on TV. Mr. Steve was on PBS kids. 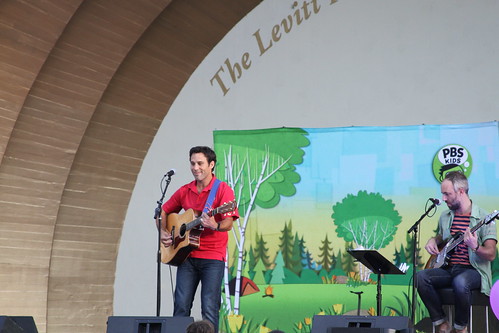 To prepare for being onstage, I watched two Youtube videos to learn the dance moves to the song, Recess Rocks. I practiced at home at night and even at the library garden. My mom even knows the dance moves.

To prepare for the interview, I need to make up 10 interview questions to ask Mr. Steve. I made up some questions and they also helped me with some.  I typed up the interview questions on notes my mom’s phone. Mr. Steve was very nice to answer all the questions in an email. These are a few things that I learned about Mr. Steve.  He used to play soccer in 5th grade and he would like to learn the saxophone one day. His son likes to play the drum. His children listens to his songs and they have cameo appearance in some of his shows.  Sometimes, his children learns his songs from seeing him on TV. Mr. Steve says live shows are “like a little island of fun.” Mr. Steve also likes to spend time with his family and got to go on vacation to places like Hawaii, the White House, Florida, South Carolina, and other places.  He wakes up very early and has a very long busy day sometimes, but he always has a smile. 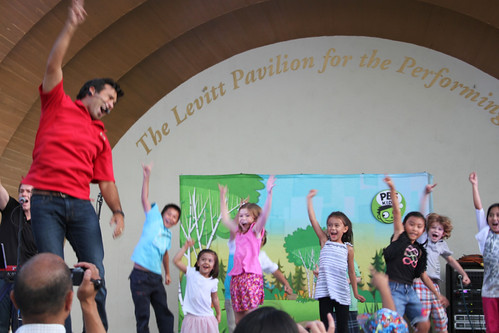 On Sunday, July 27th, my parents and I met with Jaslyne who is the other Jr. journalist and her parents. We met early to look over the questions and decide which two questions each of us will ask Mr. Steve. We then got to eat lunch and watch Mr. Steve sing at the outdoor stage. Then, jaslyne and I got invited onstage. When the song started I thought it was Recess Rocks, but it was Reading Rocks. Luckily, it was almost alike and I just followed along. I had so much fun dancing on stage with Mr. Steve, Jaslyne and some other kids. There were even real bubbles.

After the performance, it was time to do our interview. I was a little nervous, but Mr. Steve and Jaslyne are very nice. I asked Mr. Steve if he likes math and if he has any math songs. He said he does like math but enjoys making songs about science like gravity. Mr. Steve is working on a new song called, “Many ways to make a whole.” The song Orangutan Van has math in it. We got to film the first part of the video at the end. We even got to go have incredible ice cream treats after we finished with Jaslyne and her family. The day was so much fun. 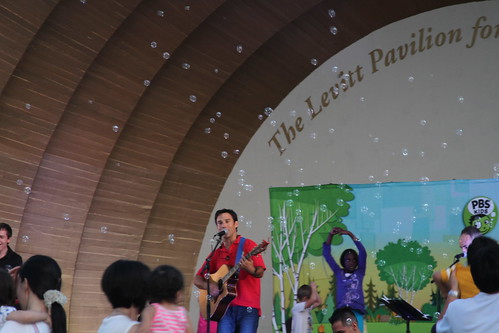 The adventure was not over yet. I will get to dance on stage at another show with Mr. Steve soon. This time, I practiced to dance to the song Reading Rocks with Mr. Steve in a few days. On Wednesday, we got to have a picnic at Levitt Pavilion.  I saw Mr. Steve get ready for his show. The stage was outside and big. The picnic was yummy and Jaslyne taught me how to play a card game. In the meantime, I had fun helping at the merchandise booth. When it was time to go onstage, I did my best to dance along with the other kids and Mr. Steve. We had so much fun. We got to dance to two songs and that was the best. My week was so cool. 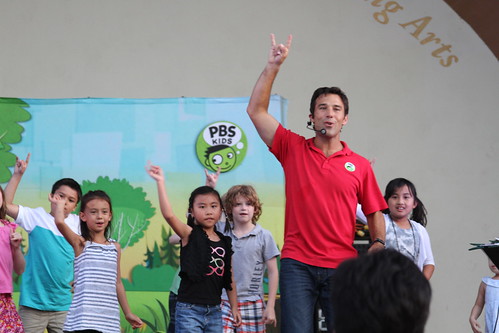 At the end, I got a CD and asked for Mr. Steve’s autograph for my cousins too. Mr. Steve can make many kids happy with his songs. He is a very friendly, funny and cool guy. He can sing and dance and also make a puppet talk.  I went up to him at the end of the night and said, “Mr. Steve, you are awesome." He say you are not shy anymore.

I really liked having this chance as a Jr. Journalist for La JaJa Kids. I learned that smiling is good for you. This week was the best week ever. 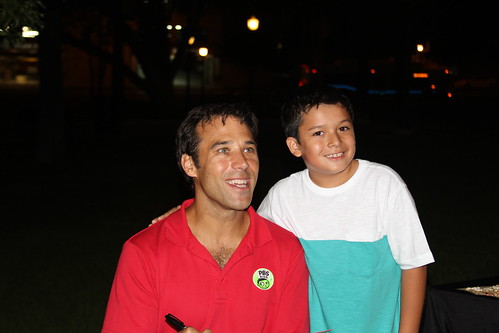 Interview Q & A with Steve Songs

Q -Did you take music classes when you were a kid?

A- No, I wish I had. When I was in 5th grade I had to choose between learning to play saxophone or playing travel soccer and I chose soccer. I still hope to one day take saxophone lessons. Maybe when our kids go to college. J

My son started taking drum lessons this year at the age of 6 and he really likes it and has great rhythm. I go into some of his classes and play around on the drums too.

Q- What kind of music do you like to listen to?

A- I like many different types of music. My favorite is probably singer/songwriter contemporary folk. For example Martin Sexton and The Weepies.

Q- How do you create a song and the music to go with it?

A- I make different songs different ways- but many times I have a topic in mind like Opposites or kindness and I spend time brainstorming all of the possible ideas that might be related to that subject. Sometimes I do that with no music but other times I do it with a guitar in hand and try singing some of the brainstormed phrases with the guitar until a song “map" starts to take shape. I try to work until the inspiration runs out and then I revisit the song ideas on a separate day with “new eyes" to see which ideas appeal to me. And then comes the hardest part of writing any song – finishing it. Sometimes you have to pull things apart (words, music, phrases) and then find another way to put them together in order for the whole song to work just right.   It is one of the most satisfying things, though, to finish writing a song that you are proud of.

Q- Where is your favorite place to sing? Q- What is a typical day like in your life?

A- There is not really a typical day for me. When I’m not traveling, I spend much of my day with my family – usually going into my office by 11:00am and leaving by 3:00 to get my son off the bus. On the other hand, travel/ show days can be pretty full. Take today for example: After Chris (my bandmate) and I got into our Orlando hotel late last night and practiced some songs, we got a short night of sleep then woke at 6:00am to get ready for the days events.  We took a cab to downtown Orlando’s Public Library, met the sound crew and set up our performance equipment from 8:00 to 9:30.  People then started arriving for the first show. There were some young helpers who had agreed ahead of time to come early and learn one of the dances before the show? So I taught them the dance and finished just a few minutes before the start of our concert. We played for about an hour until 11:30. Live shows are like a little island of fun time in an otherwise crazy busy schedule. A chance to share songs you’ve created with hundreds of people who are willing to listen. Shows always get me excited and help me feel grateful for the job I have and this show was no exception – we had about 400 people at the library and they were super at singing and dancing along throughout the show.  After the show, I met with families from the audience, took pictures and shared jokes with kids until 12:30.  Here’s a good one I heard: which Knight measured the round table? Sir Cumference. I then ran upstairs to eat a quick sandwich ( or rather to quickly eat a sandwich that had no speed whatsoever).  Our second show started at 1:00. There were about half the number of people, but Chris and I put on a better, more cohesive performance – which is how it usually happens with a multiple show day (the first show gets you settled in and the second you feel more comfortable taking chances with the music and the presentation and are able to have more fun with it). After that second show and the meet and greet with families, we packed up our equipment.  I immediately went to the other side of the library to meet with some folks from the local PBS station (WUCF).  They brought a camera to the library and set up some lights to film a few promo videos.  For some of the promos I just say things like “hi, I’m Mr Steve from PBS kids.  Thanks for supporting public television and watching music time right here on WUCF". But then I also got to interview a cute and funny little 7 year old on camera and then write a little song about WUCF.  We finished everything at 4:00. An old friend of mine from 1st grade, who lives in Orlando, then picked us up at the library, we stopped for a quick dinner (actually the dinner didn’t move any faster than lunch) and continued on to the airport to catch our 7:00 flight which didn’t actually take off until 8:00. And so here I am on Southwest Airlines typing some answers to interview questions from a couple of very thoughtful young reporters. I’m guessing we’ll land, get our car and be home between midnight and 1:00. 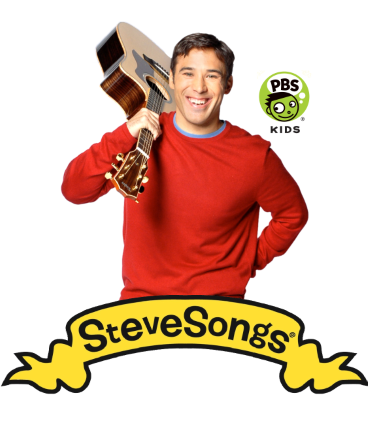 Q- Do you go on vacation and if so where do you like to vacation?

A-  For a bunch of years we treated some concert travel trips as vacation and some or all of the family would go.  We got to go to some cool places: Hawaii, The White House in DC, California, Martha’s Vineyard, Florida, etc.  but just this year we took a family trip down to Myrtle beach in South Carolina. I didn’t have any shows and didn’t even bring my guitar. It was very liberating.

Q- Does your child listen to your songs?

A- Yes. In fact for our most recent album, both my son (who was 4) and my daughter (who was 2) have cameo appearances. Joshua raps on the song “Flat Stanley” and Nadia says “Bubbles"   At the end of the bubbles song.  One time when my son was 4, we were playing checkers and he started to sing one of my songs that I didn’t think he had ever heard before. I said “where did you hear that?” He answered, “You sang it on TV this morning.” That was funny. 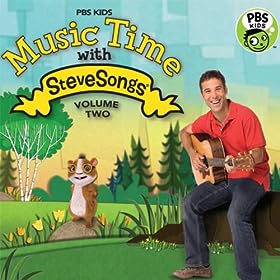 Q- Where do you go from here?

A-    This week we will be playing shows in Boston, LA, Reno, Pasadena, and Madison Wisconsin. If you meant figuratively “where", then I don’t know the answer. J 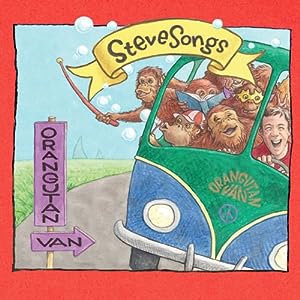 Q- Do you have any song for math?  Do you like math?

A-    Yes, I do like math.and I love writing songs about science topics. For math I have a song called pirates that challenges the listeners to count all of the pirates that get added to the ship. We have “5 frowns" which subtracts frowns and adds smiles. I’m working on a new song called “many ways to make a whole" which plays with fractions and our new album’s title song “Orangutan Van" introduces an empty 11 person passenger van and asks the listener at each stop to figure out how many Orangutans can fit in the van.

If you want to apply for becoming a junior journalist, click here for details